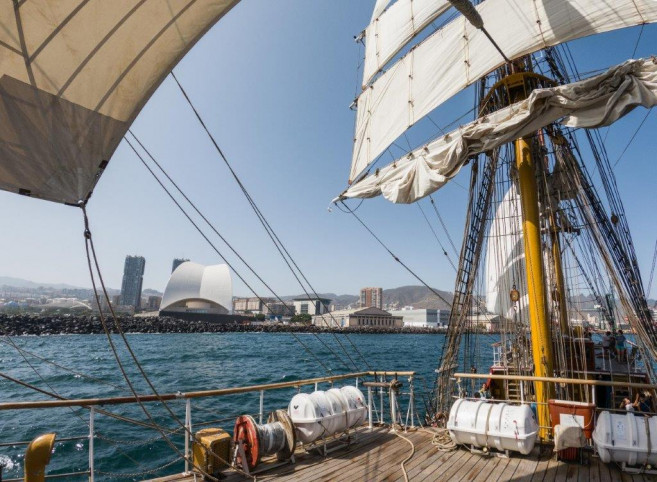 A morning spent for the last preparations for the upcoming voyage, led to the departure in the afternoon.
The new beginning of the Europa adventures, that started about a month ago, first leading her from Netherlands to Canary Islands and now ready for crossing the Atlantic. Afterwards, the next upcoming chapter will be to resume her cold weather experiences in the frigid Antarctic waters. Ironically enough, the failure and consequent repairs of her air conditioned system has made for a slight delay on the departure time. Before hitting the cold latitudes of the 50 and 60 degrees South, torrid tropical and equatorial waters are ahead of us for several weeks, where a working cooling system on board is most welcomed.

Little extra time alongside, allowed for the last preparations to be done, for the new voyage crew to get aquatinted with the ship and with each other and slowly get into the routines of a sailing ship.

After breakfast Dan, our Mate, conducted the mandatory pre-departure safety and abandon ship drill, engineers turned the ship’s systems and crew was busy on deck and up the yards.

Relatively strong NE-ly winds had been blowing during the last days, and today hasn’t been an exception. And after lunch it was time to start taking good advantage of them, letting go our moorings and setting sail to leave Santa Cruz de Tenerife harbour.

All squares, Jibs, Middle and Lower Staysails and the Mizzen sails had been already unfurled and prepared in advance. As the Captain and Mate give the instructions to start picking up gangway and recoil the mooring ropes on board, an air of excitement hovers over the decks with all of us smelling the upcoming sailing adventures about to unfold.

For many a continuation of a voyage. For others a new experience starting. For some, with already many years of sailing experiences over their shoulders, a longed return to a lifestyle based on the seas and oceans, their inhabitants, the changing winds and swells. Way of life that has been temporally truncated for what seems to be a long time, by the world’s changes rooted on the viral pandemic we are actually still suffering.

I must down to the seas again, to the lonely sea and the sky,

And all I ask is a tall ship and a star to steer her by,

And the wheel's kick and the wind's song and the white sail's shaking,

And a grey mist on the sea's face, and a grey dawn breaking.

I must down to the seas again, for the call of the running tide

Is a wild call and a clear call that may not be denied;

And all I ask is a windy day with the white clouds flying,

And the flung spray and the blown spume, and the sea-gulls crying.

I must down to the seas again, to the vagrant gypsy life,

To the gull's way and the whale's way where the wind's like a whetted knife;

And quiet sleep and a sweet dream when the long trick's over.”

And this afternoon was the time for surfacing all those feelings when the last mooring line was casted off and the Europa gradually left port behind manoeuvring under sail only.

Mate and Captain orchestrate all hands on deck distributed between the three masts, Bosun seems to be everywhere overlooking the choreography of setting and striking sails in the proper order with a mix of skilful and unexperienced ship’s compliment. And like that, helped by the NE-ly trade winds (trustful companion of this region of the planet, today blowing at Force 6), Europa heads towards the open ocean, on a Southerly course. Decreasing to Force 5 along the evening and backing to NNE-ly, they made for a more downwind sailing, with the consequent sail and braces adjustments.

For the next days we will be under the influence of those winds, blowing quite steadily towards the equator from the north-east in the northern hemisphere, from the tropical high-pressure belts to the low-pressure zone at the equator.  Features well known for classical sailors which since hundreds of years ago have kept an eye on the best ways to cross the world’s oceans, trying to avoid some areas, use others and always trying to take advantage of the atmosphere, sea flows and their patterns along the year.