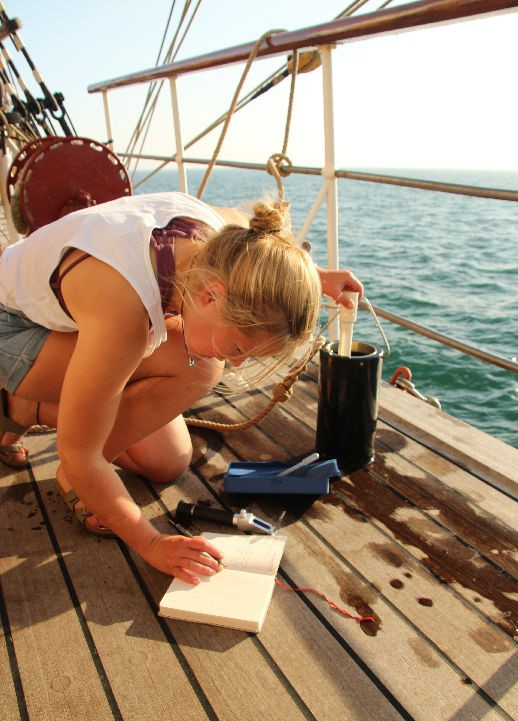 After a week and a half of conducting my research into the abundance of bioluminescence in the English Channel and Bay of Biscay, I have made a few scientific discoveries. Equally, as with any scientific research, I have discovered some flaws in my methodology. Number one; you need to stir the plankton to make it bioluminesce, it is difficult to count
plankton underneath a microscope as it flies in and out of frame. Reducing the sample size did not work. Next port of call was seeing if vibrations would have the same disturbance effect on the plankton as stirring did. We did this using several vibration methods, including the milk frother, multitool, the ships generator, an electric toothbrush before attaching my sample dish to a sander with duct tape. This seemed to do the trick of shaking the sample enough without throwing all the water out of the dish. However, this was ineffective at making the plankton bioluminesce, even when there were lots of bioluminescent plankton in the sample. Stuck. My last resort was to ID the plankton and count the abundance of species known to bioluminesce. This may have
worked however I was reluctant to go down this route for the time-consuming factor, plus the plankton species that do bioluminesce (dinoflagellates) are incredibly small and near impossible to ID without a powerful microscope.

Since then, I have been in touch with the mainland and discovered that potassium chloride has the same effect on bioluminescent plankton as disturbance does. I will attempt to source some in Tenerife before continuing my research on the leg to Montevideo. Apart from my own research I have enjoyed finding crazy species of jellyfish, ctenophores and hydrozoans in our trawls including blue buttons, by-the-wind sailors and even a lion’s mane jelly!