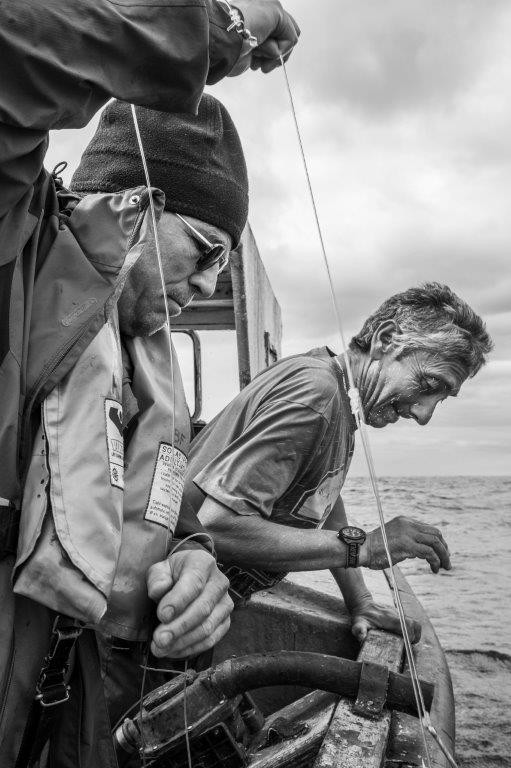 Until today these are the only family names in Tristan, and we actually met people from all the families while walking along the town and surroundings. Being an isolated community as they are, their developed their own variations on the English language, hard to understand for foreigners. But when communication with us they speak a very proper and polite English. Also all the  different geographical features in the island have been baptised by the locals, most of them being extremely practical but rather poetic at the same time, with a glance at the map you will soon find places like
'down-where-the.-minister-landed-his-things', 'Ridge where the goat jump off' and 'runaway beach'. They were all mapped and put together in 1937-38 during a Norwegian research and mapping expedition. It was during this time that Allan Crawford drew his famous map – noting down all the place names that were used at the island. Having enjoyed yet another pleasant day ashore in Tristan, soon it was getting close to start making our way towards the harbour.  It has been again great journey for walking and sitting outside the post office or the albatross pub, and enjoying a tasty bite with some beverages. The most tours finished by 4 o’clock afternoon. The deep fishing tour returned to the shore about 13:00h with their good catch, that were filleted on the shore by islanders and some of us also put the hand to work. It was a great success. Europa is stocked with fresh potatoes, salad and now with fresh fish. As activities ashore came also to an end, the guides called in the zodiacs and started to shuttle passengers to the ship. By 6 pm it was all ready to take the last remaining group back to Europa. We said goodbye to Dawn and Jack and other islanders waving back at them until
they disappeared from our sight. The day ended with great dinner at Europa, short visit from Jonathan crew aboard and then “8 o’clocky” where Janke revealed the final plan and weather situation for upcoming sailing days on our way to Cape Town. That was also the time to switch back to watch system and the first group already reported for duty after the dessert. We are leaving Tristan da Cunha with lots of impressions, memories of good times pent on the island and with the locals. The watch is already setting sail and Europa start slowly moving onto the last stage of our voyage. Cape Town, we are coming for you. As we heave anchor, the crew is already busy unfurling topsails. To get off the hook the engine is turned on for about 30 min. Straight away sails are starting to be sheeted down and hoisted. First the Top Sails and Top Gallants under a light 10kn of SW-ly breeze. Then Dekzwabber follows together with Fore Top Mast Staysail as we brace between Square and Broad Reach. But being at the lee of the island, it took a while until getting some more proper wind unaffected by the coastline and the huge volcanic building of Queen Mary’s peak, with its towering 2060m in height, and the engine has to be used a couple of times when we round the Northern coast of Tristan. Getting offshore, what we first start feeling is the rolling under the increasing swell. 1550nm of open
oceanic waters are between our position and our final destination in Cape Town, a long stretch of water not to be under estimated, where often squalls, strong winds and high seas are encountered.