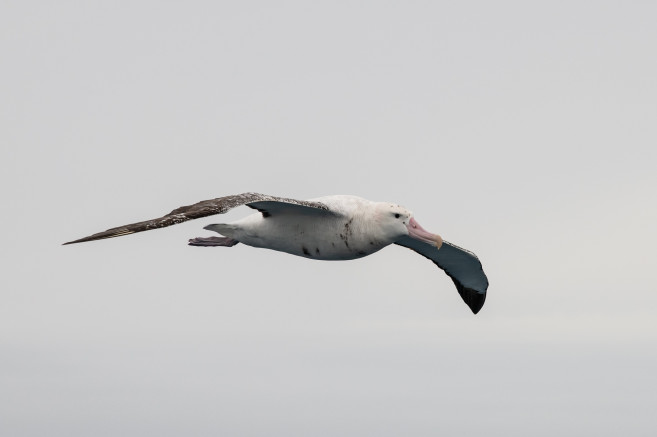 South Georgia behind, 1450 nautical miles of open ocean ahead.

It rained last evening while unfurling and starting the sail setting. It didn’t take long after dinnertime to become busy on deck.
30kn of westerly wind promised a good start to our sailing days.

Topsails, Lower Staysails, Inner Jib are the first ones to take the wind and pull us off the South Georgia coast, with the addition of the recently repaired Spanker. A fixing on the rail and sliders for the head of the sail was necessary after it was discovered damaged back in Antarctica when Europa faced the rigours of the Drake Passage and the Bransfield Strait.

The relatively easy start soon turns into a rough night. Just not to forget that we are still sailing on the Furious 50’s degrees of latitude in the Southern Ocean. There’s no real consensus about the northern boundary of this body of water. Many use the criteria of defining it as the region below the Convergence Zone, where temperate waters meet with the cold Antarctic, circumpolar seas. Others prefer to talk about the waters below the 60th parallel South. A third group of geographers don’t even consider this term and would rather consider just the denominations of South Atlantic, Pacific, and Indian Oceans.

Nevertheless, the seas at those high latitudes don’t hesitate to show their volatile character and often show their teeth. As such, soon wind gusts to 40kn together with the increasing swell. The Europa heels to Starboard side while breaking waves against the hull keep the Main deck awash. A good welcome to the sea watches and the open ocean.

Raging seas and weather didn’t last long, as it eased in the early morning to 30kn and later even more, gradually veering further to northerly.
With over 2000 meters of water below our keel and taking advantage of a calmer spell while our speed decreases, another of the ARGO floats we have onboard is prepared to be deployed. An easy recipe for bringing it to life: add a bit of water, take off a magnet to initiate its systems, hear its guts starting to rumble and wait for a louder beeping sound. Ready to start its nomadic existence at sea, joining a myriad of similar artifacts that drift over the world’s oceans, diving and emerging at regular time intervals loaded with oceanographic data.

Under sails up to the Top Gallants and middle Staysails, Spanker, and all head rig, we prepare the scientific instrument on deck. Others are busy at the wheel or having a look around during lookout duty. All in what seems to be an interesting performance for the White-chinned and Giant petrels that fly with us during the day. Wandering albatrosses show up as well. With their majestic soaring flight and large wingspan, they dwarf their feathered companions. They seem to trail our own wanderings as we follow the gradually shifting winds braced Close-Hauled. Bending our course eastwards, Europa keeps her yards with the same bracing, waiting for a much-expected wind shift, forecasted to back to a good westerly soon.