Day characterized by the countless squalls passing, together with heavy seas with swell up to 6 m and strong Westerly winds, blowing between 25 to 35 knots, gusting well over 40, accompanied by hale, sleet and snow. We try to sail on a NW direction by be are being pushed Northwards at between 3 to 4 knots. In fact we find ourselves in a worst position than yesterday, but we also need to start making our way closer to coast in the Chilean waters, to arrive to Punta Arenas in time. 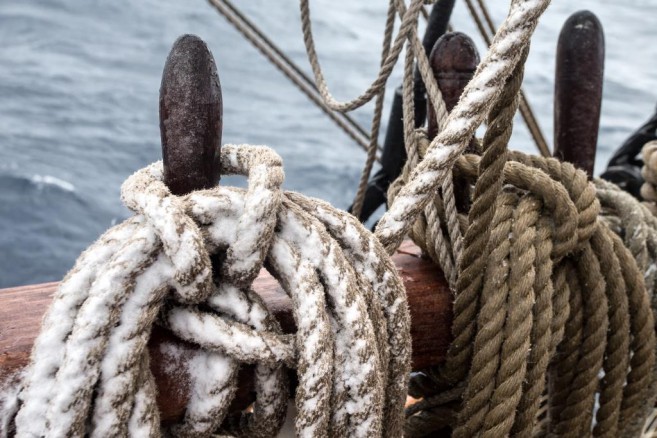 In need of a wind change

Needing a wind change, expecting it to back towards the SW, but during the day it never happened. We stay on this same Port tack slowly approaching the Chilean broken coastline at around 70º West, keeping the storm set, under Top sails, Storm jib, inner jib, Mizzen, Dekzwabber and Aap (Monkey). During the journey the weather and sea conditions are not suitable to spend time on deck, and even watertight doors to access decks are closed. Voyage crew on watch and some voluntaries remain on standby in the deckhouse, while the permanent crew keep the steering and they standby in the wheelhouse. Due to constant sailhandling, the standby time never lasts too long and after lines and jobs on deck are ready, voyage crew is called outside to help taking sails away and setting them again, coming indoors again right afterwards, to keep safe and warm.

To gain some speed and distance towards the NW we actually need to take advantage of every single occasion available between the numerous heavy (but fortunately short) squalls, to set canvas again, and again. Like this Upper top sails are hoisted and taken away countless times during the day, together with the Desmond changes for the smaller Monkey. The afternoon does not bring any news and we keep being hit by squall after squall, with winds of around 30 knots increasing during the showers. We still steer approximately 60º to the W-ly wind and still moving North. Finally during the late evening and night the wind backs slowly to SW, but in the position where we are now the Cape Horn current flow keeps pushing us Eastwards, resulting on a Northerly course.

With the 30 to 35 knots of wind that we are experiencing we cannot set more canvas than Top sails & some staysails and we don’t get enough push to start heading NW. At the end it seems like the intervals between the showers are getting longer and the wind shows tendency to drop a bit, and Klaas decide to set the Courses to get more power, now that the wind has backed a bit. Even like this it is a hard job to set them, pulling tacks and sheets on a proper set. A couple of times the Courses have to be clued up and furled when the squalls strike. But during the night a seam on the Fore course rips and we have to take it away, replaced straight away by the permanent crew for a spare one. A challenging and strenuous job, that has to be done during the cold, windy and dark hours of the night. Fortunately late at night the wind becomes steadier on the Sw-ly quarter, decreases on the average force and we are able to set more canvas and start sailing again, now with a better NW-ly course, as the conditions gradually improve.

All an all a great but laborious and demanding day battling against harsh conditions, weather and routing uncertainties, as we get closer to the Chilean coast. On days like this there is just one thing to say: Big thumbs up for the efforts of all crew, from the Captain, Mate, Bosun, Deckhands, Engineers and of course the great galley and their arduous job cooking excellent food under any kind of conditions.