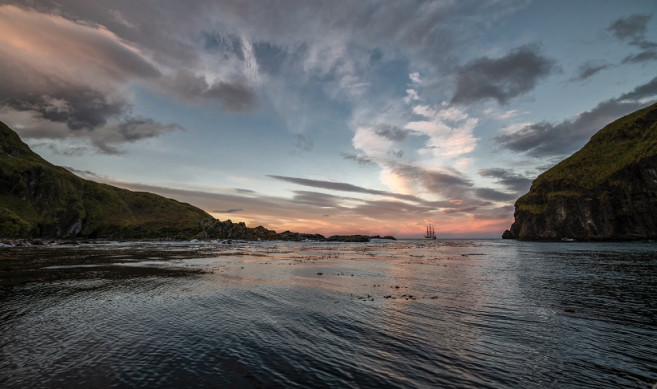 Blustery winds and a rolling ship welcome the new day. Gusts gain force as the Europa approaches the wide-open beach of St. Andrews. Atop the Allardyce high mountain range that nests a coast of flats and rolling low hills, a menacing thick cloud. High in the sky lenticular clouds tell about strong winds.

Blasts up to 48kn at our usual anchorage make for the first coffee of the day to spill off our mugs as we step on deck. Large surge washes the shores of the long sandy beach of St. Andrews. Katabatic winds, local downward speed motion of cooled air that runs over the glaciers and shoots into the sea, are yet another trademark of this location and in fact, of the whole of the island, together with large swells and unpredictable weather. And here these factors play the most, at the foot of the highest peak in the island, the alpine Mount Paget with its 2915m and its neighbouring mountains.

With the raging wind blowing come too the smell of the great number of King penguins that make their home of such a place. An estimated number of about 200.000 breeding pairs crowd the lands left behind by the receding Heaney, Cook, and Buxton glaciers.
As it often happens here, no chances today for setting foot ashore. Even so, the views from deck offer enough of a spectacle. Fierce winds, swell breaking along the exposed coast, and a myriad of penguins occupying the leveled terrain at the foot of the cloud-covered peaks and their glaciers.

Under those weather conditions is not easy even to keep the ship in position for too long, so after having a good look it is soon time to head off the wide bay towards more open waters, and slowly make way towards the afternoon’s destination.

As expected, the local furious weather conditions abate as the ship gets away from the coast and heads northwards into areas where the glaciers hung up in the mountains, further inland.
Humpback whales cross our path while the illusion of persisting calm conditions fade away. Soon we are back again to encountering strong winds and choppy seas as the ship gets into Gothul Bay. Swell breaks high on the rocks and cliffs that frame the narrow entrance of the neighbour Cobblers Cove, the starting point for the planned hike. With no chances of sailing the ship through the tight gap into this picturesque cove, Captain, Mate, and guides are up to try an audacious plan for what some people tagged as an epic last landfall in South Georgia.

Fighting to end before South Georgia tells us that is definitely time to leave, a combination of struggles to keep the ship in position, two zodiac rides, a short isthmus crossing in-between, large surge and swell breakers at the beach, left us at the beginning of our last hike. We set foot inside the landlocked kelp-strewn basin bounded on all sides by steep-sided tussock-clad hillsides of Cobblers Cove. There, a beautiful walk to a scenic Macaroni penguin rookery starts.
A tussock grass area leads to grassy and rocky slopes that run stepper and steep uphill end on a high saddle with fantastic views over the whole area from down the sea to the rugged mountains all around. Reindeer skulls and bones lie in the ground as a witness of past times when they roamed freely in the region. Introduced by Norwegian whalers as a game and a change on their diet, nowadays have been eradicated as their growing population had a negative impact on the natural environment.

Descending to the exposed coasts off the protection from the elements that embayments and coves give, we came across some Giant-petrel nests from which a good distance must be kept. A bit further, the tussock-covered slopes of Rookery Point, where elusive Macaroni penguins breed. A short but challenging last bit of walk brought us to the rock slabs where they access the rough waters. Many queue there on their highway back and forth the colony, others amble around after their daring jumps over swells and rocks. Sheathbills can be seen all around, and to the great surprise of all, a Leopard seal snooze right next to the penguins. Not to fear when on land, sure it is another story when hunting while swimming and diving.

Interpreting a change in the meteorological situation makes for soon turn around and retrace our steps back to the landing site. Just in time for a short calmer weather window in-between worsening conditions, when the Europa waits for us straight out of Cobblers Cove for embarkation.

A challenging afternoon. An adventurous landfall. A treat of a landing.
Back aboard, it was time to quickly finish readying everything to spend the next few days at sea. Not much later after dinner the first sails are sheeted down and hoisted. The engines that have been pushing us along the amazing coasts of South Georgia are turned off.
Back at sea.