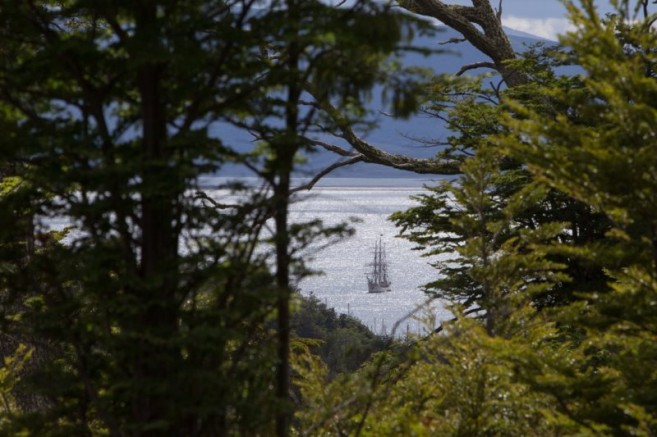 After arriving to Navarino Island under sail last night, today we plan to spend the day visiting Puerto Williams town and the unspoiled surroundings.

In the morning, after the ship´s paperwork was ready we could go ashore to spend a few hours in the amazing Southern Patagonias old grown forests, and afterwards we still got a bit of time to walk around the settlement, even though it is Christmas and almost all facilities and the few commerces were closed, we still enjoyed visiting it and walking
around the southernmost town in the world. Pretty close to Ushuaia, big and touristic city located just at the Northern shores of the Beagle Channel, Navarino Island get much less attention from tourists and visitors, remaining as the hidden pearl of Southern Patagonia. The town was founded in 1953, establishing the Puerto Williams Navy Base. But the human population of the island dated all the way from 7500 years ago, when the Yamana or Yaghan natives started to live here, one of the most inhospitable places on earth for human beings. Despite the
harsh conditions those natives flourished and colonised the area, even arriving with their canoes all the way to Cape Horn itself.

After dealing with strong winds in the morning while at anchor, Jordi goes ashore to get the authorisation to land from the Chilean Port authorities, and soon we start the landing, our first experience with the zodiacs, disembarking on a sheltered beach behind a small navy jetty. As we get ashore, three vans are waiting for us, to drive the group to the beginning of the hiking tracks that our guides choose, to show us the representative areas of the Sub Antarctic ecosystems represented here in Navarino Island. Almost all of us join those walks, while just a few decide to spend longer in town not climbing up the paths up the valleys and mountains around.

After a short ride, the group was split between the people who wanted to have a faster and longer walk, and the leisurely ones. Jordi and Bob took the long walkers all the way up Cerro Bandera, while Annukka walked along the valley of Cerro Robalo. Until now we have been sailing in the Southern Patagonian channels, with a dominant evergreen forest along their shores, these are the Evergreen sub-polar rain-forests of the Magellanic Region, dominated by the endemic species of tree Nothofagus Betuloides ocoigüe de Magallanes, together with other species like Canelo (Drymis winteri) y leña dura (Maytenus Magellanica). Now on land and getting towards the interior of the Island, we could enjoy also other sort of forests, like the deciduous Lenga (Nothofagus Pumilio) sub Antarctic forests, growing over well drained terrains. Once crossing swampy areas or near the alpine habitat those trees are substituted by the Ñirre (Nothofagus
Antárctica). Impressive as well is to see all the tree trunks and rocks covered by lichens and mosses, that thrive in the Sub-polar and polar areas. One of the most spectacular ones are the parasitic Cytaria Darwinii, round orange fungus living on the branches and trunks of the trees, spread all over, and also called indian bread, suitable for human consumption but pretty much tasteless.

The group led by Jordi also reached the Alpine Habitat, over the tree level, dominated by the cushion plants. Both groups also had a view on another habitat of these regions, the pit moss or Sphagnum complex. Despite being so isolated, and with relatively low human impact, the Cape Horn Archipelago Region has not escaped to one of the main causes of the loose on biodiversity nowadays: the introduction of alien-invasive species. For example, during the last decades Navarino Island has suffered the impact of Beavers (Castor Canadiensis).
Annukkas group could check out their effects on these pristine forests, when they arrive to their damps following Robalo River up the valley. This species was introduced in the 1950s, and its population nowadays exploded exponentially.

At 14:30h we were back at the pick up point where the vans were waiting to drive us back to town, where at least a supermarket and a local souvenir and handicraft shop were open for us. We could spend a couple more hours visiting the settlement, passing by the museum (closed as they had their official Christmas holidays, as many other places in town). But we could still see some whale bones in the entrance and the Stirling House in front of it. This house has a pretty interesting history, as it was built as an Anglican Mission in 1906 in Rio Douglas (in the Western coast of Navarino Island), but finally closed and abandoned in 1917 due to the lack of Yaghan natives. The number of members of this native group diminished dramatically in the modern times. For example in 1855 the estimated population was of around 3000 individuals, while in 1923 was of 70. Recently the Stirling House was brought to Puerto Williams, as it was rotting away and collapsing in its original location.

In town we also got the chance to visit an interesting monument, the bow of the Yelcho, a boat with an interesting history as well, related with the Polar Explorer Shackleton: After being trapped in the Weddell Sea ice, loosing his boat Endurance, and finally reaching Elephant Island, where the expedition members made camp while himself with five more expeditioners crossed the Drake Passage and Scotia Sea in the James Caird, a small boat, to reach South Georgia Island on May 20th 1916. Then Shackleton attempted to return to Elephant Island to rescue the others, finally succeeding after several attempts when he could borrow the Chilean navy ship Yelcho.

While exploring the town, we could pass by the fishermen area, where we could see the small boats they use to fish the most appreciated resource in the area, the king crabs or Centolla.
The sustainability on use of the natural resources is essential in this island. The main marine resource is the mentioned King crab (Centolla), but also the ostión (Chlamys patagonica), la merluza (Merluccius australis), la cholga (Aulocomya ater), chorito (Mytilus purpuratus) and some seaweed species like the luga roja (Gigartina skottsbergii). Some of us ended up our visit walking to the local Yaghan community village Villa Ukika". Interesting from the human population point of view, as these are the descendants of the worlds southernmost human
native inhabitants.

At 17:00h we were all back on board, ready to heave anchor and resume our way along the Beagle Channel and Southwards to Cape Horn. There was just the Chilean police and Navy clearance formality to be done. But that was easier said than done. What is supposed to be a short and regular procedure took an endless time and effort, involving some Kafkanian situations with passports and immigration procedures, with our Port agent and Jordi dealing with the more than square-minded Chilean Investigation Police and Navy Port controls. All those policies and local official approach for clearance delayed our departure for around four hours. By the time all was ready and we finally heaved anchor, an impressive and modern super yacht was making
her entrance to Puerto Williams, a great contrast between the most modern naval technology and the classical perspective represented by our old lady Europa.