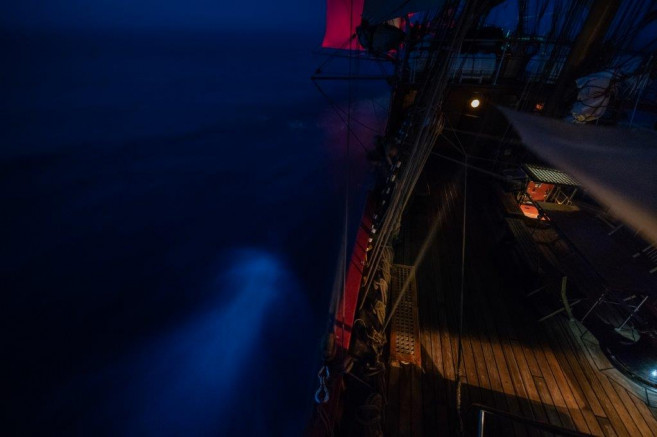 Closing in to the Doldrums. Afternoon and evening of rain showers. Plankton trawl for bioluminescence study is hoisted on deck and its always surprising contents are put under cameras and microscopes just before the dawn. Another successful sampling with the net glowing along the ship in the ink-dark waters for half an hour, and multitude of glimmering organisms collected. Micro plastics in the oceanic waters, the other net trawling research project on board, shows too interesting results and trends. The distribution and accumulation of ocean plastics is strongly influenced by currents and wind patterns. Plastics are typically buoyant –meaning they float on the ocean surface –, allowing them to be transported by the prevalent wind and surface current routes.

As a result, plastics tend to accumulate in gyres. Last samples were collected close enough south of Cape Verde Archipelago, showing a relatively low amount of plastics in comparison with other areas were we sailed before. Currents in the area coming along the North African coast, seem to deflect westwards part of the circulation and with it the drifting debris. All in all, a promising beginning of the new day, that indeed offered several welcomed surprises, good maintenance work and sailing manoeuvres.

All starting already in the morning, when the wind became more Easterly, blowing a light 10 to 11kn, but enough to give us 4.5kn of speed on a 170º course. Braced a bit on Starboard Tack, Studding Sails packed away and Staysails set. With all sail repairs done for the moment, it was time too for bending-on and hoist the large Outer Jib at the bowsprit. Clearing skies sand sunshine were with us for most of the day, but closing up to the Doldrums, weather changes are expected. Not just because of the proximity to this calm zone but also the Easterly Wave that has been developing for the last days over the Guinean coasts seem to have taken off the continental shores and head more to open waters, catching up with us.

Starting as weak channel of Low Pressure, they typically travel Westwards at speeds of 10 to 20kn. On the western side of the trough, where easterly and north-easterly surface winds diverge, sinking air produces generally fair weather. On its eastern side, behind the trough, where the south easterly winds converge, rising air generates showers and thunderstorms. And indeed we seem to go through an area with those characteristics during the late afternoon and evening.

After having sailed about 150nm during the last 25hours, counting 1273nm since departure all under good and dry weather, before dinner time, increasing of cloud cover and scattered rain showers show up in the horizon and in the ship’s radar. Captain calls to get ready for rainfall and possibly associated wind. Harness up, locate ropes, follow a plan for taking sails down and get some hands on the braces too. Better be ready when still there is daylight and the experience tells you that the weather is about to suddenly change.

This ship lives of the wind -wind is to us what money is to life ashore. Always scan the inward horizon. Always keep in tune with the feel and heft of the wind... and don’t forget that a sudden squall could lay this wagon down so she’d never get up, no matter how hard you prayed.
- Sterling Hayden. “Wanderer”

It didn’t take long for the pouring rain to accompany us on our evolutions all over deck and rig, pulling downhauls of the higher Staysails and Flying Jib, Clewing up Skysails and Royals, and shaping the ship for upcoming squalls. Rain welcomed by all of us, gathering on deck sailhandling and for a refreshment of the heat under the tropical sun and or the warm temperatures inside the ship. Passing squalls catch up with us one after the other for a couple of hours, all coming with their related rain and big wind shifts, making for all hands available on deck to grab a brace, downhaul, halyard or sheet and pull or ease following Mate and Captain’s orders. Mizzen sails come down, Courses are clewed up, Lower Staysails are set, we gybe, point of sail change from downwind to beam reach to close hauled. Wind die down. Wind peak up. Now we work on deck under pouring rain, now the skies are clearer.

Night falls and not long afterwards, under more stable weather and light breeze the engines are switched on to keep usgoing. As we leave behind the line of squalls, lightning can be seen in the horizon miles away. Time for setting the canvas we douse a couple of hours ago.

Soon we sail again full and by, with all canvas set but the Studding sails.