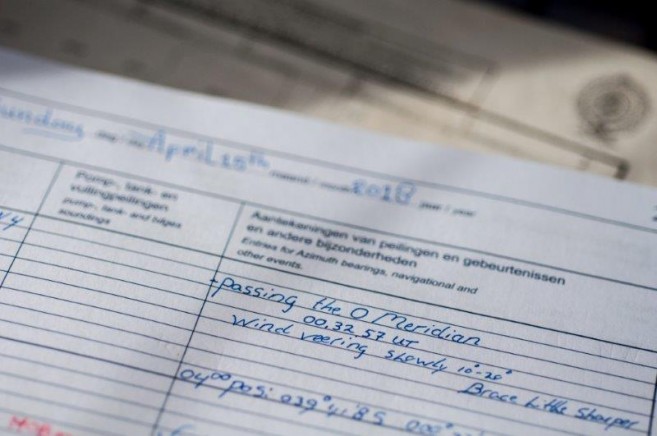 The powerful ship’s horn woke the ones that were at their bunks shortly after midnight, as a small commemoration of crossing to the Easter Hemisphere of our planet.

Nowadays, with the modern technology, precisely positioning ourselves on the earth surface it doesn’t look like a big deal, but for a long time it represented an arduous problem to be solved. Soon a solution was found to assess the Latitude through calculating the altitude of the sun or specific stars above the horizon, but Longitude, that specifies the east-west position of a point on the Earth's surface, was a tougher cookie.

To get our position on the featureless ocean, several methods were historically proposed, but it was not until the invention of the marine chronometer by John Harrison in the late 18th Century that a solution was reached to accurately establishing longitude at sea. The procedure is based on determine the time difference between a location and a Coordinated Universal Time (UTC), that represents the world’s standard to regulate clocks. It has been split into three versions differing between them just in milliseconds. The so called Greenwich Mean Time (GMT) corresponds with the first of those and refers to the mean solar time at the Royal Observatory in Greenwich, London, where the Prime Meridian (0º Longitude) goes through. This time, related with the precise duration of a day, has been calculated using long time sequences of data relevant to relative Earth and stars motions.

Latitude has the equator as a natural setting for 0º, but how to choose a natural starting position for the Longitude? All of the Meridians represent diameters of the planet as lines of the same Longitude running from North to South Poles, and are perpendicular to the Latitude circles. Therefore, a reference meridian had to be chosen as the Prime Meridian, to start at 0º longitude. The choose was, in a way, arbitrary, unlike the equator (0º Latitude) determined by the rotation axis of the planet. In the course of history different conventions had been used to establish the 0º longitude, including the lines passing through Paris, Canary Islands, Cape Verde, Rome, Copenhagen, Washington DC and several others. The British Mathematician and Astronomer Sir George Airy already in 1851 proposed as Prime Meridian the one based on the Greenwich Royal Observatory, but it was internationally accepted later on, in 1884 during the International Meridian Conference. There it was set that the meridian through Greenwich, in East London was the zero degrees of longitude, and the longitude of other places was to be measured as the angle east or west of it, from 0º to 180º eastward and westwards. By convention also the East longitudes were to be assigned as +, and the Western with the sign -

Since yesterday there was a contest going on to calculate (or guess) in which day and time Europa would cross this line. Many participated, but the closest one was the data presented by the fellow traveller Philip Meijer, differing just on 2 minutes and 57 seconds from the actual time.

That was not the easiest calculation as the daily miles covered and our average speed have been varying a bit between the last days, from close to 7kn to about 8kn yesterday, and a bit slower today at 7.3kn. All an all during the last 24 we had a good run of 176nm, that makes a total of 694nm since we left Tristan da Cunha, and still a week to go to cover 905nm, with an estimated average speed needed of 5.4kn. Until now all under the influence of the High Pressure system located North of us. But it is now moving out slowly towards the African coast, where they usually stop for a while before squeezing below Cape of Good Hope and entering the Indian Ocean. This Anticyclone is followed by a reach of lower pressure that will affect us with its forecasted increasing winds first from the North, turning W-ly later on.

For the moment, after striking Higher Staysails, Gaff Top Sail and Flying Jib during a morning passing light rain, all is set back again in the afternoon. We continue our way on a 90º course last a good speed of between 7 to 8kn, now riding larger WSW swells that have been gradually increasing during the day.

Again the good sailing conditions and fair weather made for continuing with some maintenance projects. Down on deck some of us are seen fiddling around with different blocks to be overhauled and replaced, re-leading some of the ropes and adjusting some foot-rope lengths aloft.

To end up another journey of great sailing, a gorgeous sunset closes the day, after the skies have been progressively clearing up.

I have been following the progress of the BarkEuropa with interest especially because my nephew Bryan Dean is on board. And enjoying very much the posts by Jordi Plana Morales. I had some empathy when you crossed the Prime Meridian since it passes through the town of Lewes where I live South of London. Wishing you all well on the rest of the voyage to South Africa.