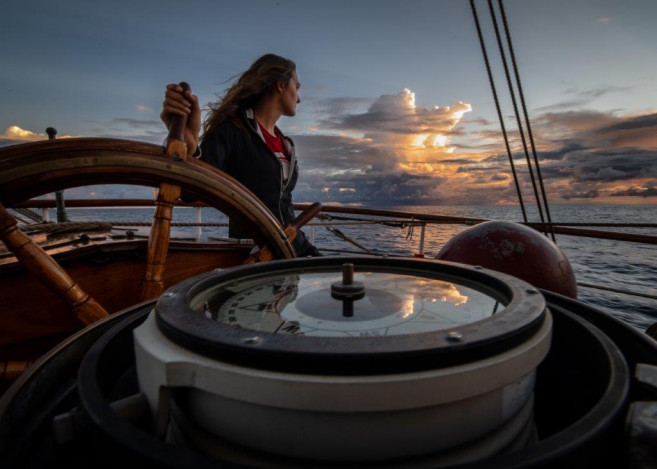 4500m below the quill; several thousand miles of open ocean around the ship; 417nm from the Equator, and calm airs in the afternoon, a good spot for taking a break and go for a little swim in the 30ºC equatorial waters. Spectacular sunset and sunrise adorned by dramatic cloud formations, variable light breeze while we make progress motor sailing amongst scattered and short rain showers refreshing the hot weather and sunny decks. Europa just hit the Doldrums - more properly called the Intertropical Convergence Zone (ITCZ) - leaving behind the North-easterly Trades.

The rising air reaches all the way up to the tropopause, level at which it starts moving toward the poles. The Coriolis force deflects this poleward flow toward the right in the Northern Hemisphere and to the left in the Southern Hemisphere, providing westerly winds aloft in both hemispheres.

All of those well-known meteorological features are known hundreds of years. Since sailors venture over crossing oceans, they have kept an eye and recorded the best routes to follow on their quests, taking advantage of the yearly patterns of the prevailing winds in some areas and trying to avoid others with unfavourable winds and currents. One of the latter ones are the sailor’s nightmare of the calm doldrums and its associated squalls.

Any time there are slight variations in sea-surface temperature, it helps to generate pockets of rising air that easily develop on frequent squalls and showers. Picturesque as they are and no doubt refreshing from the high temperatures, a good eye must be kept as sudden wind shifts are often associated to them. When hit by them, hands on deck get ready for a short burst of rain and harness-on ready to furl. Available crew usually pull downhauls of the higher Staysails, Flying Jib and clew up Skysails, even Royals if necessary, probably often more canvas must come down, just to be re-set not much afterwards when the decks steam again under the sun. Motorsailing in a general Easterly breeze, now and then all spiced up by passing amongst those rising and falling clouds, the course to keep is Southerly, but with a tendency to steer a bit more to the East, to achieve a better position when catching SE-ly Trades in a couple  of days.

Despite some showers passing by during the day, the weather was stable enough to send crew aloft to the very top of the Main Mast to de-rig Skysail Yard and bring the skysail topmast down on deck. Since days ago the electrical wiring running in it seem to give some trouble and must be checked.

The Skysail Yard is lowered in the morning, and the Mast during the afternoon, exercise spiced up by the occasional pitching and rolling on the long gentle swell typical in the doldrums.

Here, when the sun shines in the blue sky, or we have a starry sky at night, while squalls seem to pass by around far in the horizon, temperatures rise and life on board become more difficult. Hot nights in the cabins and bunks make for many to prefer moving their night quarters on deck (risking a quick scape indoors if we are caught by showers and squalls) or in the deckhouse. Night watch crews often start dealing with a sloop deck transformed in a campsite and the deckhouse looking like a hostel dormitory.