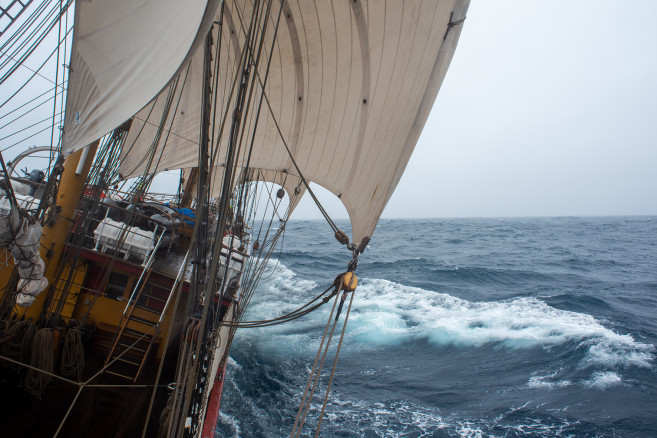 Yielding a reputation of fierce and rough passage, Drake’s legendary waters pay a good tribute to the man. Sailor, privateer, pirate, already notable during his lifetime, considered a hero by the English during the Elizabethan Era, fighting the Queen’s enemy vessels over the known seas and seizing their riches. Considered arch-enemy by the Spanish, their views on him were as the most infamous pirate of the 16th Century. A life spent riding the thin line between following the Queen’s orders during war state, but occasionally also targeting enemy ships when there was no war declared, falling into outlaw piracy. His adventures ended by the unexpected enemy of the dysentery disease on the 28th January 1596, at the age of 55. His body was buried at sea in a lead coffin off the coast of Potobello, Panama.

His legacy stands between his doings, legends and myths,  which help England to hold a preeminent position on establishing colonies in North America by the early 17th century. They embrace as well rumours about buried treasures, wild encounters with native Americans and his famous circumnavigation of the world, that was accomplished as a byproduct of his pirate activities.

Enduring the gales of the Southernmost Patagonia, he led explorers who in the future would try their luck southwards until eventually reaching Antarctica. Including ourselves, sailing the Bark Europa, we face the cold and unruly waters on the Passage that bears his name.

Clewing up all the squares and motoring for a while when the wind became more Southerly, soon it veered again to more WSW-ly, blowing at a steadier 25kn. Time for sheeting down the squares again plus adding the Top Gallants, stop the engine and enjoy the opportunity for the great sailing that the Drake Passage offered.

By the end of the day we have sailed approximately half of our way from Southern Patagonia to the Antarctic Peninsula, in a journey where swell, wins and relatively good weather brought us sights of some of the amazing wildlife inhabiting those oceanic latitudes. Now and then some of the great albatrosses show up. Wanderers and Royals elegantly glide along, peering to our  almost empty decks, where just the few of us who withstand the seasickness stand their post steering, on lookouts or giving a hand to the permanent crew with some of the sailhandling. White chinned an Giant petrels join them, and down below, riding the cold and rough waters, a few Hourglass dolphins can be seen joining a couple of Orcas.