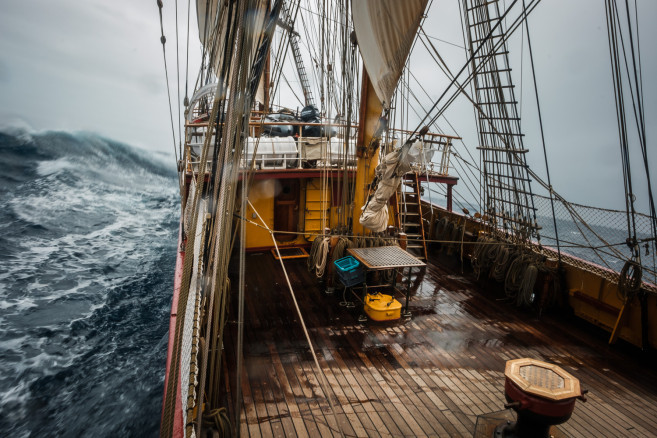 Lying in your nice warm bunk, rolling, pitching, listening to the noise of the engine, feeling the ship hitting the waves. That can only be one thing, the Drake passage.

Last night we set sails and switched off the engines. That lasted only till the morning. Then the wind died and shifted to the NNW and picked up to a 30 - 35 knots. First the square sails came down, then most of the staysails. The engines did their again. The seas slowly did build up. The pitching started. But...we're still doing quite good! The speed stayed a bit and now, during the evening watch the wind backed slowly to the WNW. Some staysails could be set again and the ship lies a bit more
quite. A bit. Hopefully the wind does what is predicted. Then we will be soon sailing again.

The rain already stopped and with the Northerly winds a bit of warmer air came round. It's already not so cold and wet anymore to stand at the lookout or helm. Or type an email in the radioroom. Most of the VC are doing good. What a difference two weeks on board can make. Even the people that are not feeling so well are still smiling. Or maybe that was because of the delicious birthday cake we had. One way or another, the progress is good and the mood on board too!