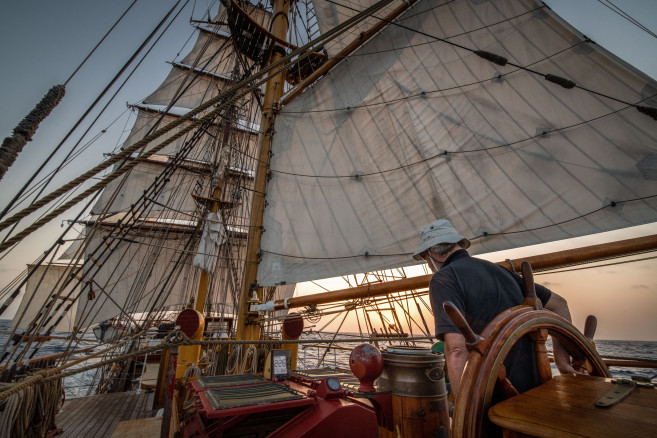 It's November 22nd 06:00 ship's time. I'm woken up by a loud bang, almost immediately followed by a blaring fire alarm siren. We're in the run-up towards breakfast and the galley is starting up with their preparations. Occasionally that leads to the inadvertent triggering of a smoke detector (toaster), or sometimes it's people taking a hot shower, with the steam triggering the smoke detector in their cabin. The loud bang however, doesn't fit in that picture. Outside my cabin door, there is also an immediate rush and the sound of a fire extinguisher. In a flash (how appropriate) I become fully awake. I quickly get up and shoot in my trousers. As a captain you have to appear somewhat decent, even in an emergency. When I open my door I'm greeted by the view of our chief mate pointing a CO2 extinguisher at the lighting control in the wheelhouse. The thought of silencing the alarm doesn't even cross my mind. I grab a screwdriver from my cabin to open the lighting control so we can get at the backside and wiring.

I finally realize the siren is still going and with some difficulty, manage to silence the alarms. There are still a few smoke detectors triggered around the wheelhouse, but all that space is in view and nothing seems to be going on there.

The loud bang that woke me was a bolt of lightning hitting the top of the main mast. The energy travelled partially down the wiring of the mainmast decklights and masthead navigation lights. We found most circuit-breakers in the wheelhouse and some in the switchroom tripped and practically all navigation equipment is off. Nobody was injured by the lightning itself.

During the day it becomes clear that trying to continue our voyage to South Georgia and Antarctica may not be the most seamanlike decision. Apart from navigation equipment and some other electrical equipment, everything is functional. Sailing or using engines is not a problem at all, but in the waters of South Georgia and Antarctica, the now non-functional equipment will definitely be missed. Sure, continuing the trip in this condition will require more seamanship, but entering these waters without all this mandatory and safety enhancing, workload reducing equipment is bad seamanship.

If you follow Europa through our website, you may have seen us sail in circles. That was us realizing that we had to cancel the trip and change our destination to Ushuaia. The looping in our track was caused by our attempts to make progress towards Ushuaia, but the Falkland current and south westerly wind made direct progress in that direction impossible. We are now heading inshore, to try and make use of the counter currents along the South American coast, which is the normal route to sail towards Cape Horn. We hope to arrive in Ushuaia somewhere near December 6th.

This new situation is bad news for everyone on board and especially for our voyage crew. This trip was to be the adventure of a lifetime. Although disappointed, nobody seems to doubt the logic of the decision and the mood on board is still cheerful.

It is also bad news for Europa. After a long downtime due to COVID, this was to be our first Antarctic trip in almost two years. There is also the fact that we will have to repair or replace all the damaged equipment before we can start the second Antarctic voyage of the season. Time is short. Suddenly this has turned into a different adventure...

So sorry for the voyage crew. I am sure they are sorely disappointed. This happened on my trip in 2010 on Lake Huron in the US Great Lakes. Lighting hit the foremast during the middle of the day, but to my knowledge there was no damage. Scared the hell out of me, as I was on forward watch!! There were no thunderstorms around the area and the sky was an iridescent white. I follow the ship via Marine Global Ship tracking, and the last reported position of the ship was on 2021-11-23 07:58 UTC. Is it possible that some piece of the navigation gear was zapped that reports your position automatically? Hope your repairs are done soon. Wishing you Happy Holidays from Ohio, USA .

glad you are all safe!