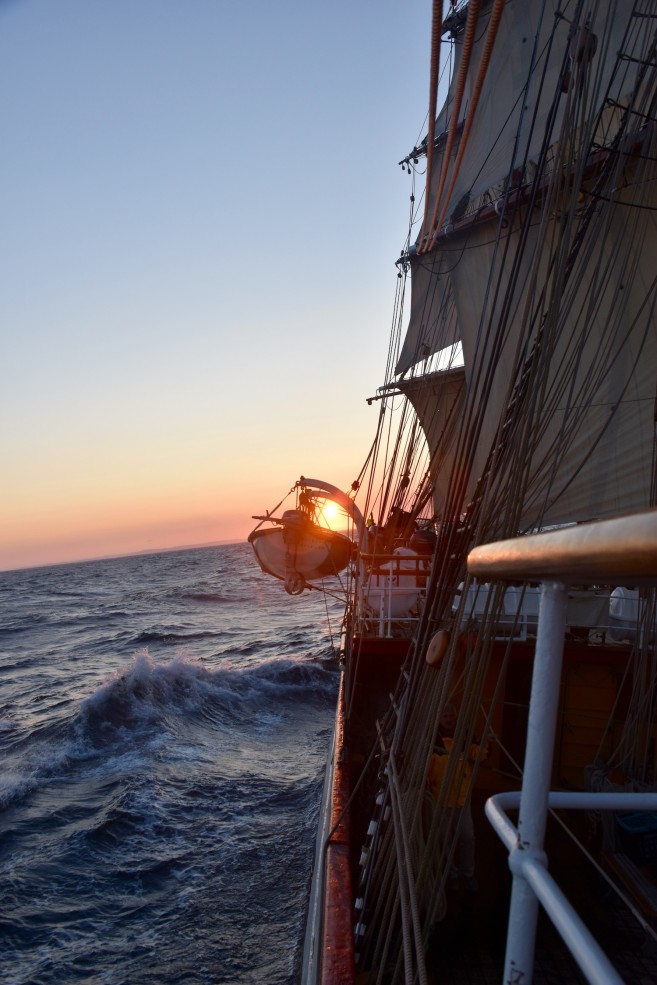 Scotia Sea, stormy and cold waters, less known but with similar reputation as the Drake Passage. Its changeable and rough qualities have been challenging sailors ever since the 16 hundreds. By then, the English merchant Anthony de la Roche ventured these waters after being blown off course, and reported the first lands ever sighted south of the Antarctic Convergence. In 1756 Gregorio Jerez aboard the ship “Leon” confirmed its existence. 1775 was when finally Captain Cook set foot and named it island George, after George III. It is now known as South Georgia Island. But it was not until the beginning of the 20th century when these seas got their denomination. Embraced by Tierra del Fuego, South Georgia, the South Sandwich Islands, the South Orkney Islands, the Antarctic Peninsula, and bordered on the West by the Drake Passage, they saw the ship “Scotia” in 1902-04 during her Scottish National Antarctic Expedition under the command of William S. Bruce. He had actually just declined his sit on board the “Discovery” for Scott’s expedition, scheduled approximately for the same dates as his own planned two-year exploratory and scientific journey in the Weddell Sea. He refitted a sea-worthy Norwegian Bark and re-named it “Scotia”. During the first year of the voyage she brought the crew as far south as 70º 25’ S, then spending the winter at South Orkney Islands. Their wintering camp set the precedent for the first Antarctic permanent Station, still manned nowadays by Argentina.

Next summer the “Scotia” set sail southwards once more into the icy Weddell Sea, now reaching 74º 01’ S. New coasts were discovered on the Eastern side of the Weddell Sea, calling it Coats Land after his sponsors. All on board the ship that gave name to these waters.

Scotia Sea, for the next days sailing playground to reach Europa’s next destination, South Georgia. So far its foul weather, freezing winds and untamed swells have been fair to the navigation. 164nm have been left behind by midday, a full day of good sailing since hauling anchor from the northern shores of Elephant Island.

Bitterly cold watches at the wheel, in lookout at the Foredeck or giving a hand bracing the yards and setting sail, Mate and Captain planning the sailing and establishing the course negotiating the winds and weather forecasts. When not out on deck we always have a warm deckhouse, a cozy library, a welcoming lounge where you can read a book or attend lectures, a well stocked bar, always hot tea and coffee, a homely cabin and bunk and a galley where good meals are cooked. 21st Century commodities and technology fitted in a classical Tall Ship, a very different situation from the survival struggles lived by the skilled navigator Captain Woorsley, Shackleton and four of their strongest crew amongst 26 more, aboard the 6.9 metres sloop “James Caird”. An epic 16 days journey taken in 1916, after the loss of their ship “Endurance” in the Weddell Sea ice, a survival crusade on its ice floes and finally setting foot on land at the hostile jagged coasts of Point Wild.

Their sailing voyage along the Furious 50’s latitudes is considered even nowadays as one of the greatest open-boat journeys ever done. Six starving, cold and tired men, crammed in a wet wooden small hull, a sail, a compass, a sextant and a watch, dealing with the very same seas and route we follow.