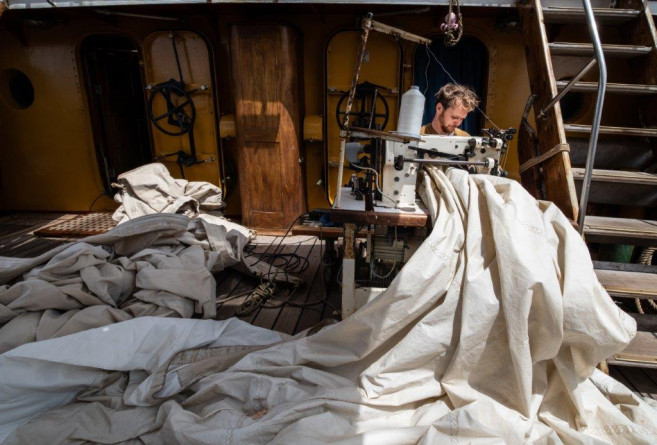 Half way from Canary Islands to the Equator. Sails repairs.

The good sailing on the fair winds channelled between the Cape Verdian Islands of Sao Vicente and Santo Antaao lasted for a few hours during last day. But by nightfall, following our Southerly course, sails become limp and powerless as the Europa falls into their shadow. North-easterly Trades ease down dimmed by the islands’ rugged slopes, volcanoes and cliffs. Hands are called on deck to clue up Skysails, pull on the downhauls of some of the staysails and lower all the Studding Sails that were set. For the first time since we left Tenerife, Europa’s engines roar, helping her progress towards more open waters to catch once more a good wind field. Indeed all that was needed was a couple of hour’s motorsailing until the ship surged ahead with good breeze in her sails. The crew on watch run the decks setting canvas again as the engines are turned off, and soon the sails are pulling us again on a good course at 4 to 5kn.

Carpenters and designated experienced-crew for sail mending are being busy all day, unless in moments like those, when all hands on watch are called.

With a couple of sails requiring repairs, Ca ptain assess the priority stitching, sewing and woodcrafting. During the day, Jib boom has been stripped of the large Outer Jib, where a rip was discovered yesterday. On Starboardside, Upper Studdingsail is in need of patching up and the Top Gallant one waits for a brand new boom.

Back to downwind sailing the first concern are the Studding Sails, and today after sailmaker and chippy hands worked their magic on them, were fitted for bending and set up their halyards, clews, sheets and tacks, and hoisted aloft.

A good week of sailing has brought us half way from departure in Canary Islands to the Equator. A week practically disconnected from the frantic lives ashore subjected to the storm of news, information and media shows. A chain which many didn’t think they could get unshackled until tasting the life at sea. A change of priorities make us centre our minds on the winds and swells, the shape taken by the sails under the following breeze, the watch schedule, and to keep a good steering and sharp lookout at the immensity of the ocean for the unexpected.

The heat inside cabins and ship’s corridors made for some of us to try a sleep on deck between night watches. Tonight, the bright Venus neighboured the crescent moon in the night sky, and just some clouds hoover over the horizon.

There is nothing like lying flat on your back on the deck, alone except for the helmsman aft at the wheel, silence except for the lapping of the sea against the side of the ship. At that time you can be equal to Ulysses and brother to him.