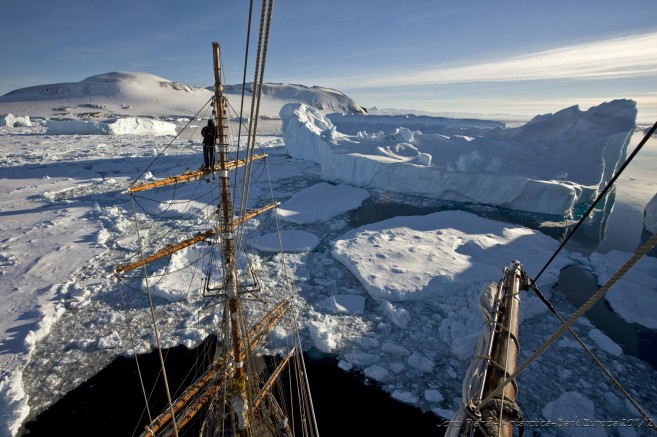 There are many surreal moments in this expedition of ours. Many will seem unbelievable back in the land of ‘normal’. Yesterday was one such day.

En-route from Signy Island in the South Orkneys to Elephant Island, we expected to encounter some ice, but as a member of the ‘Blue Watch’, the evening of Saturday 10th December was particularly memorable. Stepping up for duty, our handover informed us there were growlers around, but we were still sailing through them.

Settled in the warm deckhouse for the 20:00 - 00:00 shift, we were called outside for a bit of sail handling. This would be a frequent occurrence ahead of us as we navigated our way through the ice. As the watch unfolded, we witnessed the striking beauty and endless variety of ice shapes drifting past us. Gradually the density of the ice increased. And still we were sailing, not using the engines.

Klaas was able to steer among the growlers, using the fine control from the wheelhouse. A permanent crew lookout sitting high up on the main
yard passed information back to the wheelhouse via VHF radio. The swell was long and rolling and now a gentle breeze was filling in. The ice wallowed in the sea around us. Still we were sailing.

The horizon became completely white and within minutes the sea was less visible than the ice. We were being hemmed in. Old sea ice. A few
smaller pieces scraped down the side of the vessel and we bumped the odd ‘bergy bit’, but no harm done. Still we were sailing.

Growlers were scooting alongside, less than a meter from the hull, their larger, sinister underbellies glowing a beautiful green and turquoise.
Still we were sailing.

Voices on the VHF switched to Dutch. Uh-oh. The lookout aloft was switched for an Antarctic ‘old-hand’. Meanwhile Blue watch were already
up and handing all sails as fast as we could. Engines on and in reverse. Europa was holding station, no longer moving forward. To do so now would be folly. Still, we were free.

The lookout described clear water circa 4 miles ahead, but the way forward would be ‘very narrow’. No kidding! At deck level there was no
discernible way through. Red and White watches slept little listening to the graunching of ice as Europa was skillfully nudged from gap to gap,
but on deck we were as quiet as church mice. This was visually spectacular but all the while nail-biting stuff. Then, like stepping
through a door, the sea suddenly opened up with barely an ice cube in sight. Sails back up, engines off, we handed over to the Red watch as if
nothing had happened. Again, we were sailing.

Well you asked for it and you had it......well done a truly once in a lifetime experience. Take care . Love Sue

Wow Sue, nail biting stuff! Really enjoyed your exciting update, I could just picture and hear all the sounds! I am shivering at the thought of it all! Truely a magical experience! Not sure which watch Russell is on, but know he will be loving every minute of it. Look forward to his stories!

Sounds like a case of "gin and bear it".

We could feel the chill, the silence and the excitement so envious thanks for sharing the magic.

Wow, good thrilling story Sue Clutton! Can't wait to join the Europa on January 16th. I wonder whether you will land on Elephant Island. That would be most spectacular. Share some pictures with me, if you do. Have a safe voyage!

Great post Sue but when has lack of ice ever stopped you from enjoying a G&T before ?!? Bon continuation.