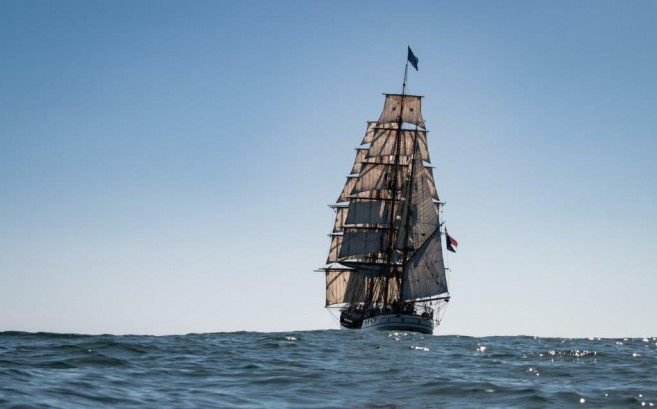 A night spent sailhandling on light breeze, bracing several times and gybing to Starboard tack, expecting a fair breeze to pull us to our anchorage or the port pilot station in front of Montevideo. But still the sunrise over the clear skies found us with almost all our canvas set drifting in a windless situation.

Courses are clewed up, and still with the rest of squares set plus higher and middle staysails, flying jib stowed away at the bowsprit, it is time to start the engines and gain some distance. Many days have passed since we hear their roaring, being lucky as we have been with the good winds to use their power and the sails for making progress.

On that way, and doing the proper speed for a Manta trawl, checking for plastics in the waters of the mouth of Rio de la Plata, the last scientific samples of the trip are collected.

With a total of over 50 trawls, the research conducted on board about plastics at sea can be considered a success, with trawls taken all over the crossing of the Atlantic. From Oceanic Subtropical areas, passing by the tropics, equatorial open waters, temperate systems close to the South American coasts and lastly a zone affected by large land inputs through Rio de la Plata, the net has been collecting samples to be studied during the next couple of months in the laboratory.

On a similar way, plankton trawls for bioluminescence have been taken too along the way.
With such an array of samples sure some interesting correlations will pop up between the different oceanic ecosystems, the physical characteristics of their waters, the variety of ocean currents that we crossed and the contents of the trawling nets. Currents driven by changes of salinity and temperature, affected by the continental boundaries, or guided by the forces produced by the rotation of the planet itself. Winds stirring the surface waters inducing their movement and mixing with deeper ones. Large atmospheric global circulation patterns and local ones with their changes on barometric pressure, Lows and Highs, storms and squalls. Areas rich in nutrients and others seemingly oceanic deserts. And at the end the human being and its effects on the whole system.

A scientific sample taken from the field is never an isolated item, seeking knowledge is easy to get lost in the immensity of correlations between the microscopical scope and the macrocosmos scale. Sometimes easy, others difficult is to consider how many of those boxes that human are so keen on compartmentalize we should rip open to reach a conclusion.

…the observer who earnestly pursues the path of knowledge is led from one class of phenomena to another, by means of the mutual dependence and connection existing between them.
…
This general picture of nature, which embraces within its wide scope the remotest nebulous spots, and the revolving double stars in the regions of space, no less than the telluric phenomena included under the department of geography of organic forms (such as plants, animals and races of men), comprises all that I deem most specially important with regard to the connection existing between generalities and specialties, while it moreover exemplifies, by the form and style of the composition, the mode of treatment pursued in the selection of the results obtained from experimental knowledge.


Scientific equipment put away, now for the last time in this trip, lunch is served on deck and afterwards preparations begin to drop the inflatable boat and do some photographic tours around the ship, while she tries to catch the light sea-breeze of this afternoon. Warm air rises over the land around us and, growing clouds above it, while light wind from the ocean comes into the river mouth.
Later on in the evening the wind increases and sailing downwind Europa picks up some speed, steering towards Montevideo.