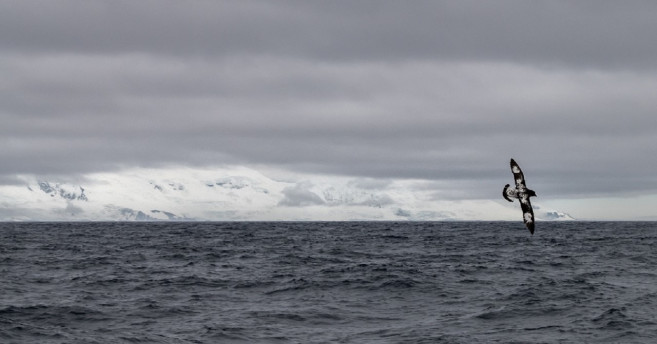 Early morning. A Skua fly pass. Maybe announcing the proximity of land? a quick look at the radar reveals that Clarence Island is just about 24nm away from our current position. Over 2000 metres high glaciated peaks hide behind the low clouds. We are close to the East-most of the South Shetland Islands, one of the first lands to be discovered in Antarctica. It was in 1820 by a reckoning expedition lead by Edward Bransfield who roughly charted the area and even risked a landing there, naming the island after Prince William, Duke of Clarence (1765-1837).

A year before the merchant sailor William Smith sighted for the first time some of the more southern South Shetland Islands, after being blown off to the south on his commercial ventures around South America. Islands and Continent that had eluded illustrious sailors like Captain Cook, who in 1772 managed to circumnavigate Antarctica without even seeing the continent. He sailed his two ships, Resolution and Adventure, as far south as 71° 10’ S between the Antarctic Bellingshausen and Amundsen Seas, but unfortunately didn’t sighted any land. The discovery of the Antarctic islands had to wait another 50 years.
Continuing sailing on our Southwesterly course we get closer to it. An hour later its glaciers become visible, and before they conceal themselves once more amongst the clouds, a sudden wind shift. The rig runs suddenly aback when the Northerlies become Westerlies in no time. The island surely shadows the general wind filed and creates its own blows in different directions while we sail at its lee side.

A flock of the beautiful Cape petrels seem to enjoy the sight of the Europa under sail, and how she deals with those wind shifts. First the engines help to redress the situation, then a new course straight South is set.
Now with the wind backing and veering a bit from Northerly to North-northwesterly and with variable force, the ship enjoys an afternoon of good sailing. Stronger blows now and then, make for dousing first the middle staysails then the Royals redressing the ship a bit from her heeling to portside.

The good speed drops in the evening when the wind eases down and current seems to turn against us. The engines help on our progress until nighttime when Europa sails again under all her squares, headrig and Lower Staysails, now braced squarer and with her courses stretched with their whisker poles to catch the most of the winds blowing almost from her back. Her way set for the northern entrance on the Antarctic Sound, the gate to the Weddell Sea from the Bransfield Strait. Shortly she will be arriving to those Antarctic lands, so it is time to prepare the ship and ourselves for that matter. Our second rubber boat is put together and inflated, while biosecurity measures keep on going indoors. Again like in South Georgia, the intention is to minimise importing any alien species to the delicate Antarctic ecosystem and avoid the interchange of organic matter between the different spots to visit. A station is set in the deckhouse for the cleaning of clothes, bags, boots and all gear we thing is going to be in use during the next landfalls.