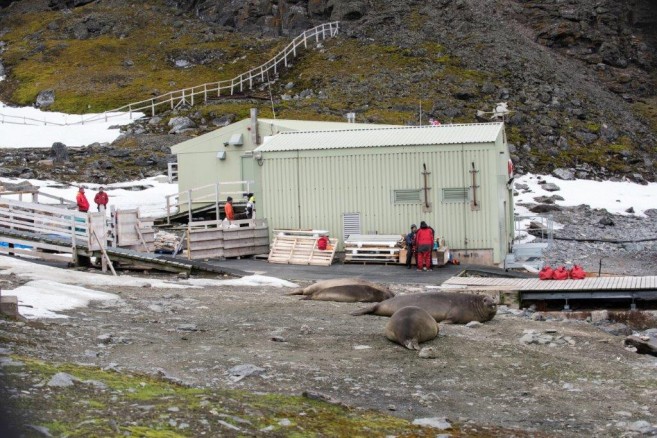 Last evening, the South Orkneys showed their unforgiving and jagged rocky coasts battered by gale force winds and high swells. Icebergs of any kind and shape, bergy bits and growlers seem to protect the fortified steep shores, helped by the confused seas created by days of strong blowing winds. Since last night, due to the wild conditions and the difficult steering amongst rocks and ice, the voyage crew was released from their duties.
Already about midnight it proved to be out of question to keep pushing against sustained winds between 35 to 40kn and gusts of about 50. Getting the ship to a safe open sea area it was decided to stop engines and slowly drift, waiting for a change of tide and better visibility than in the dusk. And so it went, early in the morning both our engines roar again trying to steer the ship under naked masts towards the possible shelter offered by Factory Cove, at Signy Island, where if all goes well we plan to be after lunch and try our luck for a landfall. By now it is clear for all of us that we signed up for a real adventure in the only Tall Ship that regularly operates in Antarctic waters during the southern summer season, sailing over the most infamous seas in the world, and offering more than just an Antarctic trip. Anyway the sight of land and abundance icebergs spiced our day, now that we are used to the vast expanse of the Southern Ocean. The South Orkneys are in fact an archipelago of numerous islets, rocks and islands, where the largest one is called Coronation and the other major ones are located at its south and east, being Signy, Powell and Laurie. Before reaching Signy, the Europa still has to brave about 30nm of rough seas and persistent head winds, first motoring south through the Washington Channel, a narrow gap between shallows and islets, then rounding Coronation towards Signy. Right in time after breakfast we were
called on deck to give a hand bracing the yards around to port tack, under cloudy and misty skies, accompanied by swells breaking around us and persisting forceful W-ly winds. But just lifting our heads from the pins and ropes, spectacular scenery unfolds in front of us. The South Orkneys jagged broken rocky spine connect the different islands, with their craggy faces climbing up to unexpected heights over 1200m above sea level. Under the saw edged peaks, great icebergs loomed out of the breaking swell, all rocks and ice in a seemingly black and white picture. Most of the larger islands are partially covered by ice caps and glaciers. Very different from South Georgia, the South Orkney Islands belong completely to the Antarctic system, biologically and politically, even
though they are located 375nm from the Antarctic Peninsula itself. That means leaving behind the great King penguin colonies, the large number of troublesome Fur seals and the arduous walks over tussock grass
covered slopes. Here Elephant seals congregate in large numbers, and several Chinstrap, Adélie and Gentoo penguin rookeries enjoy the isolated islands located at the northern limit of the summer Weddell Sea ice. United Kingdom and Argentina both maintain bases in the islands, the Argentinean one being the largest of both and also it holds the title of being the oldest in Antarctica, with the first building established in 1904. Our goal though is the smaller British Signy Station, set up by the British Antarctic Survey in 1947. Just before lunch we found ourselves getting into the small open Factory Cove, named after the whaling Station originally sited here, and where the Base is located. There the sea state was much calmer and the gusting winds abated; enough
to launch zodiacs and go ashore for a while. For some of us, a nice opportunity to set foot on this remote island and chat with the people based here; for others it seems to be more a momentary relieve of the rocking ship, to feel again solid ground under their feet. On land we were welcomed by the Station Leader Matt, who has spent many summers here, and his crew of six, out of which two are scientists and the rest logistics working on refurbishing and improving the accommodations and laboratories. The small size of the living and working quarters can house about ten of us at a time. While we take turns indoors to chat with the crew, check the facilities and get some Station Souvenirs, the rest could take a scenic walk around a free roaming area. There, basking Elephant seals are scattered all over and Adélie penguins take a rest on the rocks together with a handful of Gentoo’s. Up in the sky several of the beautiful Snow Petrels fly. Many of them nest in the steep rocky shores of the island. Being an Antarctic area, it is pretty surprising that many slopes are covered with extensive moss beds and the rocks masked by a layer of lichens. We had a couple of hours to wander around the Station before returning to the ship, now together with five of the people working at the Base. Once on board the captain takes them for a tour of the ship and invite them to a beer or a hot drink, before they have to come back and we have
to hoist the anchor to continue on our way to Antarctica. Now under calmer conditions than the last days, but still under W-ly winds, that will not make for an elegant navigation under sail. Soon after getting off the hook and sail out off Factory Cove, a most welcomed sun shows up in the clear skies, and low in the horizon dyes the large icebergs next to us with the sunsets warm colours.