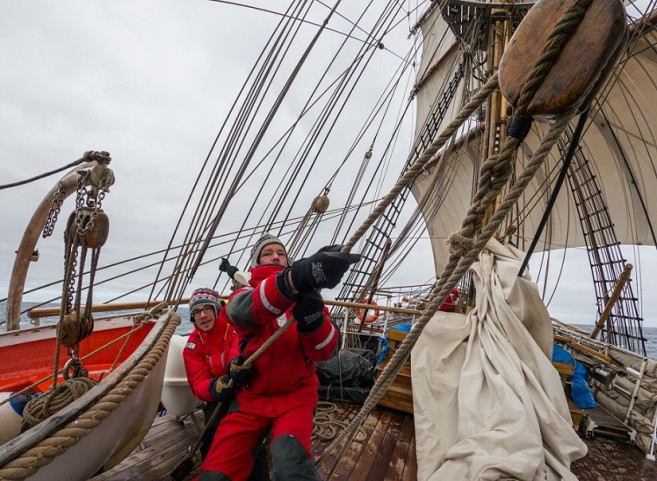 Last night during the watches, first time for many to hear and even smell the breathing of the seas mighty creatures crossing our path. From lookouts to steersmen we lean over the railings listening to their blows when now and then Humpback whales break the agitated surface of the ocean. Loud and heavy respirations sometimes just alongside, dark huge bodies which show up in the dim light of the full moon when not veiled by the sleet and snow that fill the countless squalls that cross our course.
Not far from South Georgia yet, Europa sails over their feeding grounds along the narrow continental shelf south of the island, having several good sights of their blows, backs and flukes during the whole day. An area with seas and weather gradually increasing, wind shifts and passing dark clouds.

Southwesterly becomes Southerly, and then back again in an undecided dance, often disturbed by the passing of squalls.
Then: Clew up Courses; Take Spanker away; Drop Desmond and Deckzbabber; Brace the Main parallel to the wind; Start bracing the Fore mast around; Keep on going bracing the Main; Set Spanker on the other tack; Pass the Headasails over; Tack and sheet down the Courses; Hoist Desmond and Deckzbabber afterwards
Set a new course
…
And then again…
Wearing ship to change course in the shifting wind. With lots of sea room, a manoeuvre performed in reasonable weather. The smaller the circle described the less ground lost to leeward. Based on turning the ship with the wind, teams are needed distributed on all decks to coordinate the strategy.
A night steering to the Southeast, then more Eastwards, West, North and back to the Southeast.
A part of the day keeping this heading, but then again twice more turning around, repeating the operation.
40nm East-South east of South Georgia, the spectacular 271m high Clerke Rocks, with the large Nobby and Office Boys were on Port side are now at Starboard, a while later after the manoeuvre again, they are back on Port. Just a shade in in the night, but clearly visible in a similar fashion when we were wear ship twice again during the morning watches.

The pessimist complains about the wind; the optimist expects it to change; the realist adjusts the sails
William A. Ward

Afternoon meet us braving strong winds over 40kn and growing seas, rain and snow squalls shielding the sun, sweep over the Europa, while she takes breaking swells and sea spray over her decks.

Hours pass and still under those circumstances the full moon rises while a new squall hit the ship. Upper Top Sails are clewed up and furled when several iceberg signals appear in the radar screen. Large ones have drifted away from the grip of the Weddell Sea and now disperse with the currents of the Southern Ocean, reaching those South Georgia latitudes. But it is not those which present a hazard for us, but the smaller pieces that break from them. Growlers and bergy bits that barely stay afloat, rising and sinking in the high breaking swells. Ice-lights and sharp extra lookouts at the fore deck try to spot them in the freezing cold for rest of the night.