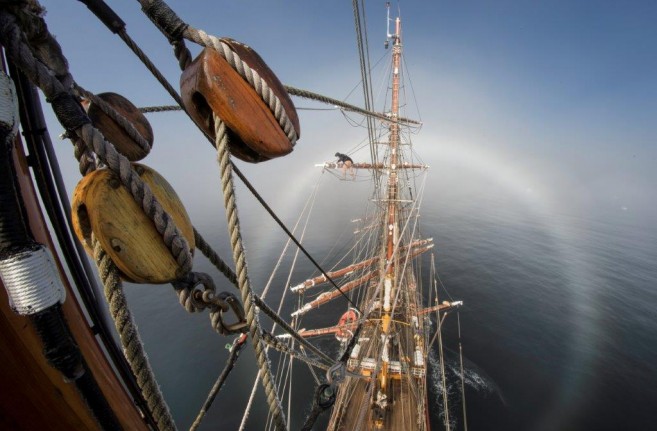 The good weather we had during last night turned into fog early this morning. At 06:00, as planned, but with very low visibility, we were ready to pass the narrow gap at Eclipse Point, sort of the bark Europa’s gate to the renowned Lemaire Channel. Impressive as it is, this narrow passage presents a navigational challenge even in good weather, so today our Mate Jelte faces it in the mist, squeezing the ship between the icebergs that leave barely any space to maneuver and glacier fronts at either side of the ship. Leaving behind the tight passage, it’s just about a half hour of open waters to the northern entrance of the coveted Lemaire Channel. From then on, the conditions indicate that at any moment the fog bank that hovers low on the waters of the scenic strait, can lift. And indeed, leaving the spectacular cliffs of Cape Renard at our port side, the high mountains of the surroundings start taking a peek through less dense fog. Gradually the situation improves, the fog gets thinner and
the glaciated and steep scenery starts to unfold for us to enjoy. Climbing the masts, a curios meteorological phenomenon can be seen. The layer of thin fog, together with the blue and sunny skies above produce a fog-bow. Similar to a rainbow but on that case the light gets refracted by the tiny droplets of fog vapor instead of raindrops. At the same time they also stick to the ropes and cables of the rig leaving a layer of little icicles on them. Suddenly, half way on the Lemaire we find ourselves in the sun with blue sky above our heads. On the horizon, all around us, still the lower areas of the Lemaire still remain under the foggy sheet. Europa takes her time on that sunny spot, cruising amongst the icebergs and brash ice of Deloncle Bay, a side cove of the main channel. After a while we resume our way south, gradually steaming into the fog once more. As we entered the fog again, the fog bow appears again and it could be seen by many from deck and more clearly from aloft.
Luckily the ice conditions are pretty good inside the Lemaire Channel, and we keep motoring amongst icy patches and scattered icebergs between its high and glaciated mountains that shoot up to 900 m on either side of the ship.
As we approach the small archipelago of the Argentine islands, we found several huge icebergs stuck amongst the numerous shallows and rocks, some of them dwarfing the old lady Europa that tries to squeeze between tight waterways on her way to a suitable anchorage, steered masterfully by our captain and mate. Exiting moments for all of us on this last bit of today’s route. Plans for the afternoon are to visit a couple of islets of the Argentine Islands group, including a stop on the Ukrainian Station Vernadsky. This group of islands is separated from the Graham Coast by Penola Strait and include Fanfare, Irizar, Uruguay, Forge, Grotto, Corner, Galindez, Winter, Shelter, Skua, Leopard, Black islands and The Barchans islands, between many small rocks and islets. The whole area was roughly
charted by the French Antarctic Expedition 1903-05 and named after the Republic of Argentina.

About lunchtime we lay at anchor, and soon afterwards we start the afternoon activities. Weather has been progressively improving, but at the time the zodiacs are launched, low fog banks are still present making zodiac navigation difficult. Later the fog lifts, leaving behind clear skies for the late afternoon and evening. Before visiting Vernadsky Base, we start disembarking at Winter Island,
where the Historical building Wordie House is located. This hut takes its name from the explorer James Wordie who travelled to Antarctica with Shackleton on the famous Endurance expedition. Actually, it was the original British Base before the most known Faraday was built nearby. Faraday ended up changing hands from United Kingdom to Ukraine and was renamed Akademik Vernadsky. Walking across the snow fields of Winter Island, soon we all reach the hut for a short visit to this sort of Antarctic Museum. Outside the sun shines and playful Fur seals make for nice shots from all of us.
There we were picked up and after a short zodiac ride we reach the Ukrainian Base, where the friendly crew welcome us. The 12 integrands of the staff stay here all year round, and it includes logistic personnel, cook, doctor, meteorologists, geophysicists and polar biologists. Right here was the place where the British discovered the ozone hole in 1980, and during the Base tour we could even see the original instruments. Later on, Britain reduced its Antarctic budget and closing the station crossed their minds, until a better solution was found. Ukraine had the expertise and wanted to conduct research in Antarctica and it all ended up with the British selling the facilities for the symbolic amount of one pound.
Having a tour around the Station, the assigned guides showed us around, including a visit to the laboratories, scientific instrumentation, generator room, fuel tanks, galley, dining room, fitness room, some basic medical facilities, storage space for all the expedition gear, sauna and lost but not least – a pub. This Antarctic bar was already built by the British, but in the Ukrainian hands became a most famous “southernmost pub and souvenir shop”. This is where usually all the visits to the Base end, and everybody can have a drink and relax, even using their pool table.
Before diner we make our way back on board just to be surprised by the special plans for the evening. A full barbeque was set on deck, and for those wishing to do it, the party could go on until late night hours. Today we had the privilege of enjoying the wonderful sunset while having a copious and great diner on deck, dancing afterwards and getting to know each other better. The event was joined as well by some of the Base workers, that like everyone, like to have a fun time on board our beloved Europa.