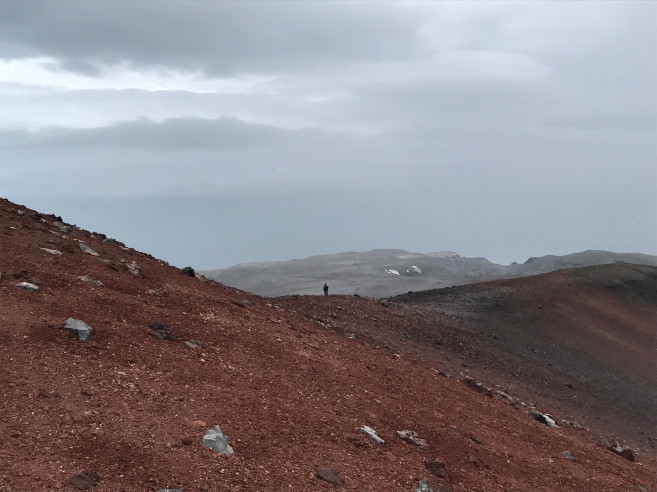 A clear morning with good visibility and with the sun often shining amongst the clouds followed the last evening experience which was a good reminder of where in the planet we are sailing at the moment, the cold and stormy Antarctic Peninsula.
Making way on headwinds and drifting overnight in the Antarctic Sound, Europa meets the new day closing up to the continental Antarctic coast of the Antarctic Sound, an area considered as a sort of a gate to the Weddell Sea.
This channel gets its name not for the southern continent itself but after the ship that wrecked here during then Swedish Antarctic Expedition at the start of the 20th Century. In 1901, she left Sweden captained by a character well known for all of us already, Carl Anton Larsen, under the leadership of Otto Nordenskjold, a 32 year old geologist eager for Antarctic exploration and scientific development. A successful expedition though filled with unexpected developments, unfortunate turns of events that translated into the loss of the vessel, unplanned over-wintering and a saga of survival and endurance.

With the typical changes and shifts on the meteorological conditions of the area, today’s morning good weather allow for good views of the high orange cliffs of Brown Bluff. The spectacular volcanic crags fall off a 3.2 km long ridge of basalts and lavas with a flat low area at their foot. Here, Adelie and Gentoo penguins thrive, counting hundreds of couples of the latter ones and several thousand of Adelie, all surrounded by glacier fronts and a bay often filled up with a mixture of sea ice floes and bergy bits originated by the glacier calvings. A location not just interesting for its wildlife but for the setting itself, with a geological history that tells about an “englacial volcano”, originated by eruptions that mainly happened underneath an ice cap and its posterior glacial and weather erosion. The eruptions are part of the so called James Ross Island Volcanic Group, ranging in age from the Miocene to present. Its original diameter is thought to have been about 12-15 kilometres, and probably formed by a single event.

Visiting such a distinguished spot often requires skilled zodiac driving to reach a shoreline frequently shielded by drifting ice brought here by swell and currents, and today wasn’t an exception. Negotiating our way ashore with shallows and ice, the first surprise is to come around a large Leopard seal snoozing atop and ice floe. Sure it took our attention for the beginning of our time on land. The beauty of Brown Bluff and its inhabitants starts to unfold. A myriad of Adelie penguins walk back and forth from their rookery to the beach and the stranded ice floes, looking always busy and determined. Gentoos seem less organised, with their colonies spreading wider, less crowded and individually acting more on a wanderer mode.

But Brown Bluff offers more to experience, including a bit of a daring extended hike as well, and with the time and weather on our side (at least for the moment), we took the chance to do it.

The bluff stands in-between glaciers, and actually framed by their moraines and further out, their fronts. Why not to explore them too? Like that the group climbed up along the loose sediments arranged as a ridge that form the lateral moraine of the neighbour glacier. The geological features of the cliffs reveal a past of several eruptions all linked to the same period, sure some of them under the pressure of the ice above. For instance a good cross section of a succession of “pillow lavas” is beautifully displayed. Other clastic rocks are all around, with a lighter matrix embedding basalt boulders. Above our head a layered orange rock-wall buildup of several lava flows. Under our feet, the loose sediments of the moraine, still piled up over old glacier ice. Down below, the surface of the glacier. Part of it still holding a tidewater front, the closest part to us being already land terminating. There we set foot after a steep descend. Having enough grip on the boots to walk on it to the closeby beach, soon we are surprisedly its impressive calving front, which dictated the turning point of the hike to the landing site. Soon the zodiacs pick everybody up, not before enjoying the last mischievous Adelie penguins and yet another Leopard seal taking a rest on the ice.

Another unforgettable Antarctic experience yet so different from the stormy and harsh landing from last evening.
Next destination will be the South Shetland Islands. The latest wind forecast advise to leave soon the Antarctic Sound and make way before the conditions worsen. Even leaving straight away, motoring against the increasing headwinds and swells for well over hundred miles will take us until tomorrow morning.