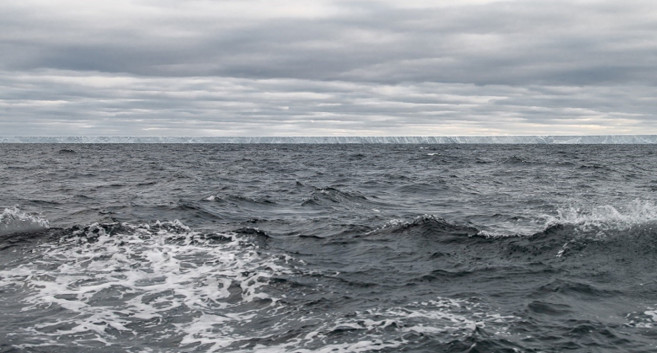 56 metres of steel, wood, canvas and ropes. Three masts dressed with over 20 sails…

The ship lives off the wind, wind is to us what money is to life on shore. Always scan the windward horizon. Always keep in tune with the feel and heft of the wind.

Keeping track always on what’s on the forecasts and what’s blowing over our decks, we find ourselves in a non favourable area for sailing, thus the need for using the motors to gain distance towards our destination in Antarctica, longing for a shift, a change on the wind that will allow us to climb back aloft, unfurl sails and call them to be set from our decks.

The Scotia Sea has been playing its different moods since departure from South Georgia. First blown off by Katabatic strong blows, then, paying a good tribute to the stormy and cold reputation of these seas, the Europa experienced what is to be sailing between the “Furious” 50ºS and the “Screaming” 60ºS, across this renown body of water between Tierra del Fuego, South Georgia, the South Sandwich Islands, the South Orkney Islands and the Antarctic Peninsula, bordered on the west by the Drake Passage. But now, its infamous gales and big seas are abating. Wind becomes breeze straight from where we want to go. The easing weather allow to gradually squeeze more speed out of the engines. Hard sailing first, calm now, who knows how’s going to be in a couple of days.

Sailing the Southern Ocean and its temperamental waters to the remote Antarctic Regions is never an easy job. Weather, changeable winds, swell, hazards to navigation posted by the drifting ice, reasons why the existence of Antarctica was just unveiled during the first half of the 20th Century. Many tried before to find the elusive southern continent, the “Terra Incognita”, some returned empty handed, others were lost forever in this unforbidding ocean.