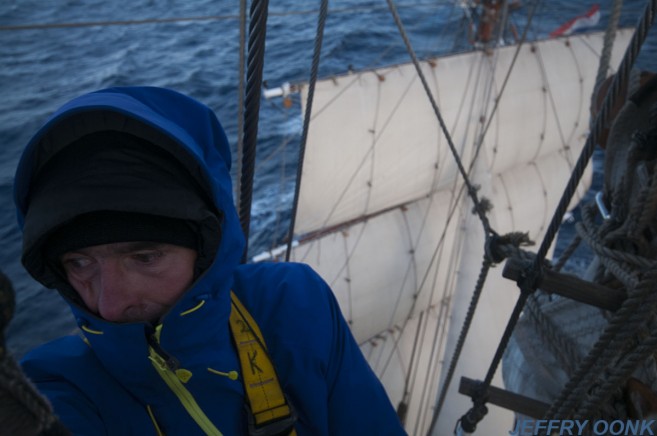 Mr. Drake, as we call the notorious passage between the southern tip of Patagonia and Antarctica, has been kind to us.

Mr. Drake, as we call the notorious passage between the southern tip of Patagonia and Antarctica, has been kind to us. We left the beautiful Beagle channel three days ago and sailed into the Drake Passage. Albatrosses and petrels have accompanied us since, on our way to the “White Continent”. The albatrosses, with their wings spread out, glide
endlessly on the wind without making a single wing stroke.

The cold wind blows in my face with 30 knots an hour and the last day we have covered about 7 knots per hour. Antarctica is getting closer. It is half past four in the morning and with my harness hooked-on I stand high up in the mast. The sun stands low above the horizon and the damp air of the Southern Ocean is painted golden. Europa rocks like a runaway horse on the endless waves. A moment of pure bliss.

But this moment of joy has good reason. We have passed the first icebergs and more are seen on the radar screen. I am on “ice-watch”. From this height, up in the mast, we can oversee the surrounding seas much better than from the foredeck, where the voyage crew keeps an eye on floating ice. Through the radio, mate Gijs asks whether I need to be
released. “Take it easy” I reply, “I do not mind staying up here for a little longer”. I can’t get enough of these magic moments.