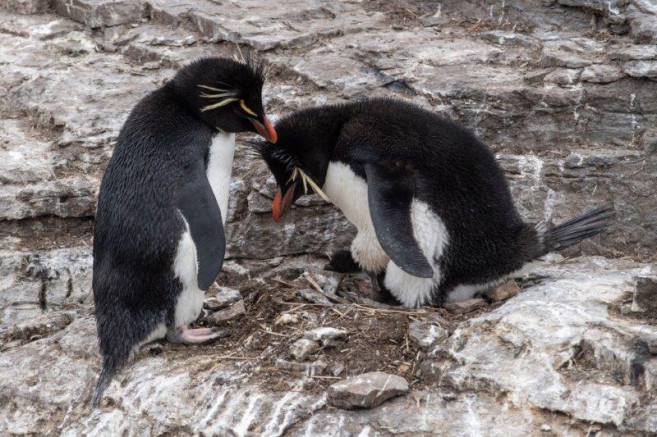 With the last boat returning to the ship well passed sunset, all was ready to motor a handful of miles to a better anchorage than Mare Harbour. About an hour later Europa dropped anchor between Lively Island and main East Falkland Island, a more protected bay from the increasing W-ly winds.

There, the new day began with overcast skies that quickly developed on a much clear and sunny day, still with winds up to 25kn blowing from the West.

After heaving anchor during breakfast, the course set for the next destination at Bleaker Island gave us the chance to enjoy a couple of hours of good sailing. But before that hands to be sent aloft to prepare and unfurl the canvas necessary that we stow away every day when spending the night anchor.

Gradually Top Sails, Lower and middle staysails, Spanker, Fore Top Mast Staysail and Inner Jib are set, and soon, bracing sharp to Starboard tack, we are on our way on a S-ly course.

That lasted until the morning coffee break was finished, then all sails had to be clewed up and furled once more, as Bleaker Island lay in a headwind course. Motoring against the wind, it took until about lunchtime to drop anchor at its Northeastern shores.

The lowlands of the island offer some protection from the W-ly winds and seas, and despite the bay was swept by it, the waves and swell were low and the landing sandy beach looked great from our decks.

The elongated shape of the island gave it its fist name, originally Long Island. Along its coastline we can find a variety of environments, including great lengths of inviting white sandy beaches, rocky cliffs and sheltered coves. But today’s quiet and idilic looks may give a wrong impression about the true nature of the island. Often rudely swept by strong winds and breaking swells, the low silhouette of the landscape may well account for a number of shipwrecks over the years. The Cassard, a French steel barque built in 1899, was bound from Sydney to Cardiff with a cargo of grain, when she was wrecked at the southern point of the island in July 1906. During the next 20 years another four ships were lost at here.

The low rolling hills are grazed today by heards of sheep and cattle, with just a few fenced areas where the Tussock grass thrives, but that was not always the case. In 1871 a visiting warship, HMS Reindeer, recorded that the whole of Bleaker Island was fringed with tussock and that feral pigs were the sole inhabitants.

The history of human presence in the island can also be traced by a further report by the local newspaper. It stated that in 1888 five vaults were discovered in the southwestern corner of Sandy Bay opposite the anchorage we were using today. Their origin remains a mystery to this day and although it has always been assumed that they were graves, it appears more likely that they were built as food storage sites by sealers or penguin hunters. These reports are clear evidence of early habitation. But today the island is owned by Mike and Phyl Rendell, who runs a successful farming operation, combined as in many other areas of the Falklands, with conservation efforts. Also, some cruise ships stop here now and then, but other visitors land in the island using a small airstrip, attracted by the solitude, interesting nature, wildlife and fabulous landscapes.

For us, after an easy disembarkation at the quiet sands of the so-called Sandy Bay, the site offered a varied afternoon excursion. After meeting with the farm owners and having a better idea of the island’s layout, off we went for a short hike, first having a look at the pond located at the back of the beach. There some birds that we still haven’t seen during this trip could be observed. A couple of the Falklands endemic subspecies of White tufted grebes were swimming and diving at the distance, while three of the smaller Silvery grebes shared the lake with them, those hold a small population in Falklands, but they are common residents in Argentina and from the Chiloé area northwards in Chile.

Close to them we also could see a few Speckled teals. A common resident in Falkland Islands and throughout the Patagonian region on both slopes of the Andes.

Leaving the pond behind, and on a leisurely hike over grazed fields, festooned with Upland and Ruddy headed geese, we continued towards some of the Rockhopper penguin colonies that inhabit the island. As we walk, we pass under the attentive looks of cows and shorn sheep, avoiding too the areas burrowed by the Magellanic penguins. And soon we reached the cliffs at the East of the settlement where the farming activities of the island are based. There a healthy colony of Rockhoppers cling on top of the rocky faces, using a steep highway to get up there. It didn’t take much time to realise also the large amount of Skuas that were also interested on the nesting birds. Not just the penguins but on the Rock and King cormorants colonies closeby as well. On that location seems like the penguins are often hatching the two of their eggs, not very usual on any of the yellow crested penguin species, but seemingly offering chances for both populations to grow, themselves and the skuas.

A few meters away along the top of the cliffs, a deep cut on the landscape with precipitous rock walls falling straight into the sea indicated that we arrived to the called Long Gulch, where multitude of the Patagonian endemic Rock shags hang their nests. Laying on their eggs, many still are building or refurbishing their nests collecting whatever materials could be found, mostly dry tussock grass leaves and algae from the tide.

Moving along, our guides decided to make a small loop on the way back to the landing spot to visit yet another cormorant colony. A very different one this time, not on a cliff but inland over a large flat area, next to the dirt road that lead to the settlement. Here what seems to be thousands of King shags nest, one right next to each other. This species is also an endemic to Patagonia and Falkland Islands, mainly in waters influenced by the South Atlantic Ocean.

Here they seem to do pretty well, even though they are continuously stalked by heaps of Skuas surrounding the main breeding area, often succeeding on catching an egg or a recently hatched chic in-between all the sea of birds laying on their nests.

From there just a short walk back to the beach brought us to the zodiacs to return on board. This time, on the shuttle back to the ship, an inquisitive Sea lion payed us a visit, and the last ride could also enjoy a small group of Peale’s dolphins bow riding the zodiacs from the shoreline until the painter line was attached and we were climbing up on deck.

The Europa spent the night at anchor at the same position, on slowly but surely increasing winds, that following the forecast will rise up to 30kn for the early hours and tomorrow.