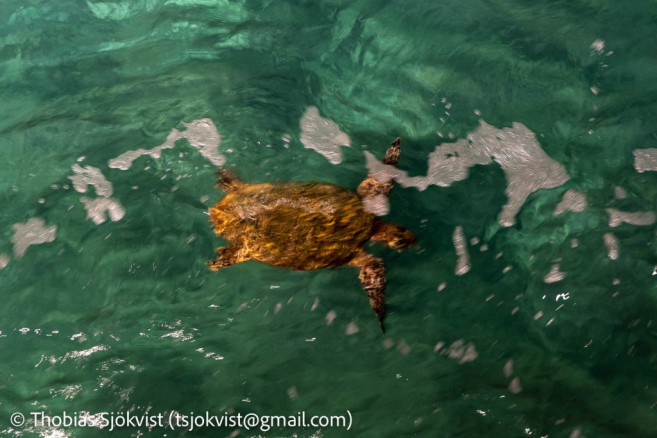 Left the anchorage under sail a bit more than an hour ago.

Ascension:
Discovered in 1503 on this day by the Portuguese Alphonse D'Albuquerque who gave her the name.
But unofficially it was discovered in 1501 by a Galician sailor Joao de Nova but working for the  Portuguese crown on his voyage to India, he sighted the Island on Conception day but forgot to mention it officially.
But on his way back home in 1502 he discovered also St Helena and he received all the credits for that discovery.

Yesterday was a good day for our Island hoppers and our Ascension visit was concluded with an evening walk on Long Beach.
At eight o clock the three watches gathered on the pierhead and took off in the darkness of the night, equipped with red torches.
The goal was to find turtle hatchlings digging themself out of the buried nests and then in the cover of darkness run to the ocean.

The green turtles are migrating from the Brazilian coast to Ascension just to mate in the coastal waters around the Island and then the females put their eggs on the golden beaches of this Island.
Every female makes several expeditions to the beach to dig big holes on the beach about 1 meter deep.
In the bottom of this big nest they bury the eggs, mostly around a 120 pcs.
She will come back several times in the season that lasts from December to April and produces a total of around 500 eggs.
The tropical sun will do the rest.

Depending on the temperature the eggs will turn into males or females and after 50 days crawl out of their shell and out of the sand climbing out of the nest and on their way to the Ocean.
The darkness hopefully protects them from the Frigate birds and reaching the ocean where they keep on swimming against the waves of the surf to safety and deeper waters for 24 to 36 hours.
But in the end of the story is that only 1 of the 500 little turtles survives the first year of their life.

We are a bit to late in the season for seeing the Green Turtles (1,25 meter large) digging their nests but not to late to see plenty of hatchlings crawling out of the deep nests and making there run to the big surf of the Atlantic Ocean.
One of the many impressive little miracles that Nature gives us.