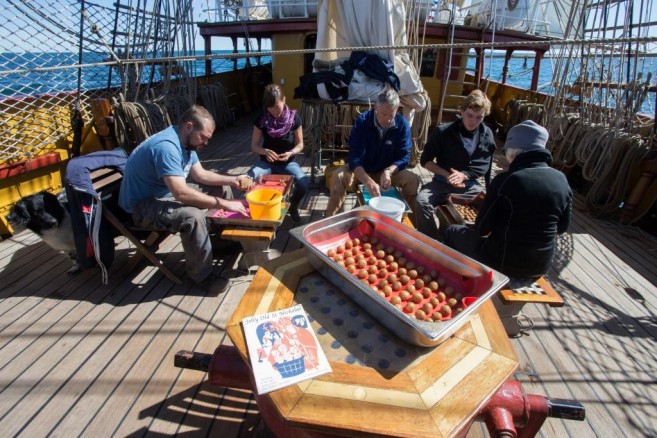 During the early morning wind keeps dropping down and we start setting the canvas we took away by the evening. As we are doing this, just at breakfast time, the wind becomes more Westerly, time to wear ship again and start heading South, from our actual W-ly course. The sunrise promises a sunny and warm day, under blue skies. Once the wearing ship is done we set the rest of our canvas and sail Southwards. As the morning passes the wind veers from the West to the North, decreasing even more. Under the influence of a High Pressure system the conditions become gradually calmer, and in the afternoon we start sailing downwind and the three Studding sails on Starboard side are set.

On our daily meeting after lunch Klaas informed us about our progress, as usual, but also starts preparing us for the everyday more plausible possibility that actually the rounding of the Horn as planned from the beginning of the trip (50ºS in the Atlantic to 50ºS in the Pacific) will be very difficult if not impossible on our time frame. With the several periods of calm winds that we had during those weeks, the periods of headwinds and on top of all the weather and wind forecast for the next days, seems that probably we will have to pass to plan B pretty soon, maybe visiting Cape Horn itself and the fantastic Chilean Patagonia, its channels, fjords, islands and the wildlife inhabiting Cape Horn region all the way to Straits of Magellan. A look at the last day’s sailing progress can’t do anything else than corroborate this news. For example last 24 hours we could just sail 31 nm on a 254º course, and our waypoint to Le Maire Strait is 357 nm away.

Despite this, of course we will keep sailing for as long as we can on the direction of Southern Chilean Patagonia and Cape Horn archipelago. For the moment just enjoying the sailing, keeping the feeling of doing so many miles under sailpower only, start the engines is not an option. Now we can also imagine how it was all the sailing wandering all oceans in the world on ships with no engine at all, combining periods of tough times with intervals of the boats sitting in the water waiting for fair winds.

And while we almost sit in still the water, sailing at just 2 knots of speed during the morning and part of the afternoon, we keep having Patagonian visitors. First a group of Commerson’s dolphins pass by checking us, later on several small groups of Peale’s dolphins swim around, curious about the ship. After hanging around for a couple of hours, waiting for us to catch speed and have fun bowriding the Europa, they seem to realise that will not happen, at least, not for the moment, and they leave us and probably search for some for fish elsewhere. While the dolphins are around, groups of Sea lions approach us as well. Females form those groups, and no big bulls are sighted. Besides being more solitary animals, by that time of the year the males are mostly on land defending their territories and harems from the other mails. So what we can see around are females on their way ashore or foraging.

With the exceptional weather situation that we had today, with sunshine, warm weather, blue skies and little wind, the preparations for the traditional Dutch birthday of SinterKlaas started in the afternoon. Sinterklaas (or St. Nicholas) is the Patron saint of the children, travellers and Sailors as well, and being on a Dutch ship, in four days we will celebrate his day with a Pink elephant present exchange activity, and eating the traditional pepernoten cookies that we start preparing on deck today.

Having done the Tenerife to Salvador leg I am rather envious of all the wild life you are seeing! Great stories. Very readable.