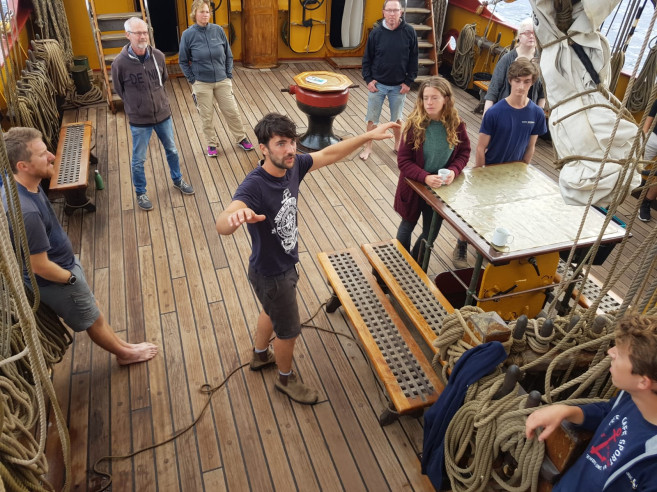 An update from the marina of Funchal on the island of Madeira, where we saw two 1,5 meter Scalloped Hammerheads patrolling the shallow waters around the ship this morning. An unexpected and spectacular event having these pelagic (open ocean) animals come this close. Welcome to Madeira.

Yesterday evening we arrived at the island, this morning we moored in the marina of the main city of Funchal. The weather’s been good: calm and sunny. We haven’t had too much wind but there’s no rush to get to Tenerife, the final destination for this voyage, either. The atmosphere on board is relaxed. Lots of good conversations and laughs. The different watch groups (red, white and blue) have setup different systems of working together, and it’s been great seeing the energy in the groups. We celebrated engineer Mkize’s 30th birthday with, again, decorated and delicious homemade cakes. ‘’It ain’t easy being a star’’, Mkize said somewhat shy after we had sang for him. The voyage crew organized a jamming session on the foredeck. I saw a violin, two guitars and many singers. Voyage crew Huub is currently even building a cajon - something like a drum - from scrap wood that the crew collected from the ocean earlier.

After a personal introduction Marcus and myself started our on-board plankton and plastics program. Marcus conducted three plankton trawls in the Atlantic Ocean so far. The samples are shared with the Continuous Plankton Survey Program (CPSP). Marcus also gave a lecture on the different types of plankton making beautiful chalk drawings on deck. Did you know that ‘plankton’ is a term for all organisms that drift with the currents? Both plants and animals. Some of them can grow up to ten meters. Marcus’ samples contained copepods, isopods and diatoms. We also found By-The-Wind Sailors, animals called hydroids that use a sail to move across the ocean’s surface. Next to organic life we found microplastics in the samples. From fishing lines to undefined pieces of harder and softer plastics. That was to be expected, since myriad research projects worldwide have shown microplastics in all waters.

Plastics and circular economy are also on the on-board menu. I kicked off with a quiz. Sixteen questions about plastic pollution, like What is the most found plastic item on beach cleanups worldwide? and What plastic items are targeted by the European Single-Use-Plastic Directive? We organized the quiz twice because of the different watch hours. Eric (the father of cook’s assistant Sara) and Elza both won an edition, receiving a Bark EUROPA branded reusable water bottle (a Dopper) and a Bark EUROPA t-shirt. Later I gave a lecture about plastics, from the production of the base product (pre-production plastic pellets, or nurdles) to so-called end-of-life, when plastic becomes waste and is recycled, incinerated or dumped in landfills or when it becomes litter (plastic pollution). I also compared plastic to natural materials. In short, I guess the take-away message would be: plastic is not bad in itself. It has brought us a lot of comfort, safety, possibilities and progress. Looking at the overall impact, plastic scores better than some natural materials, which for example are a lot heavier (glass) causing higher transport emissions or require more water, land and pesticides (cotton). Plastic is an environmental problem though when it ends up in our environment where it might never completely degrade anymore. We might be talking hundreds of billions of kilos. All plastics breakdown into micro- and nanoplastics. Also chemicals could be problematic. Of the 10000 chemicals associated with plastics, up to 2400 are potentially harmful to humans. Finally, being a very cheap material plastic does not incentivize to switch from our throwaway, single-use culture to one of reduction and reusables. With that mind, voyage crew will make lists of ideas to reduce their plastic pollution / ecological footprint, which we will discuss at the end of the voyage.

In the evening, it was storytelling time. A couple of days before, we had saved part of a styrofoam box from the ocean with one of our masthooks. I had invited the voyage crew to come up with its lifestory. After the eight o’clocky (daily update) Elza and Mo shared their creations, and it was incredible. If you wanna hear more about Styrofoam Box Steve’s world travels, Thai tattoo, jobs as packaging and great love Fiona, or about the Zoo- and Phytoplankton armies battling the newly discovered Aeroplankton you can read the entire stories here. Both women say they never write stories. Apparently life on board sparked their creativity. Looking forward to hearing the stories of Ellen and Zoë. Zoë is a journalist joining this voyage to produce an article, and told me she already wrote six pages about the Styrofoam box.