Before leaving Antarctica behind, our last visit is Elephant Island, the northernmost of the South Shetlands. The island and the little cape that we visited today, named Point Wild was of outmost importance for the Imperial Transantarctic Expedition, under the leadership of Ernest Shackleton (1914-17). 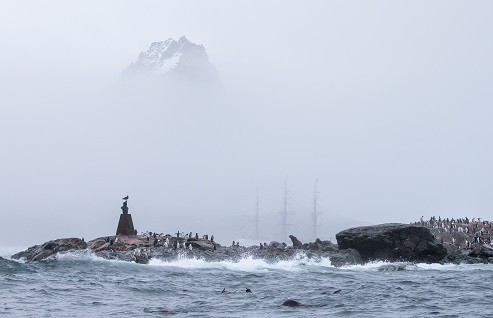 Leaving the Weddell Sea, where we followed the steps of Nordenskjold and his men, we also have in mind that this was the area where Shackleton’s expedition started their struggle through the pack ice after loosing their ship. With the navigation on the Europa from now on, and then visiting South Georgia, we are on the trails of the Shackleton’s Endurance expedition. Point Wild was the jumping-off spot for Captain Worsley, Shackleton and four of his men in the lifeboat James Caird. They successfully negotiated the 700nm passage to South Georgia, and Shackleton ultimately returned to rescue the 22 men stranded at this rugged location. The site is named for Frank Wild, who was leader of the stranded party that survived here for four months till they were rescued in August 1916. The Chileans have erected a monument on site with a bust of Capt. Pardo, the Master of the vessel Yelcho who effectively reached Elephant Island and proceeded with the rescue of the stranded party.

Despite the strong wind gusts over 35 kn now and then, the anchor hold pretty well last night, sure lying on the mud and fine sediments left behind by the huge Endurance Glacier, close to where we anchored. Around 04:00h in the morning we start our way under engine, first eastwards following the Southern coast of Elephant Island, then turning around Cape Valentine from 07:00h onwards. As we turn the Cape we start heaving some Westerly component in the wind filed that blows just at 12kn, and we set some Staysails to gain a bit of stability on the large swell. Middle staysails plus Inner jib are set and we motorsail at 5.7 kn towards Point Wild.

The morning is grey and foggy, and eventhough we are around half a mile from the coast we can barely see the huge cliffs and glaciers of this impressive island. But when we drop anchor in the front of Furness Glacier that calves along the bay between Cape Belsham and Point Wild itself, the clouds and fog lift enough to let us start admiring the amazing landscape. The area was in fact charted and named by the Shackleton Endurance expedition 1914-16, nowadays in comparison to photographs from back then, we can see how it has been receding quite a lot. After a scout party checked the conditions of the site, they decide that the only way to visit the area will be with the boats, on a zodiac cruise. The swell and surge are pretty strong on the landing rocks, but still manageable with the zodiacs.

As we cruise the weather gradually improves, and besides offering spectacular views over Furness Glacier as we drift amongst the brash ice in the bay, we can see the impressive Houlder Bluff, that overlooks Point Wild. This cliff was named "Mount Frank Houlder" by the Shackleton expedition 1914-16, after Frank Houlder of the Houlder Steamship line, who assisted that expedition. We approach the rocky shores dealing with the swell and the shallow rocks all around us, and we can clearly see the sculpture of the Chilean Captain Piloto Pardo, erected on the spot where Shackleton’s men were living for four months and then rescued by the ship under his command, the Yelcho. As we cruise throughout the wild and rough area, its hard to imagine how human beings impelled by the urge of living could survive for such a long time on such a terrible, beautiful and desolate place. During Shackleton’s expedition, when the three lifeboats reached this very same beach, the men boiled up water for tea and commenced hunting the penguin and seal which lay on the rocky strand.

After the grueling life on the ice, the ragged crossing of the Bransfield Strait through sea ice and bergs, the men finally had fresh meat to replenish themselves. Ernest Shackleton wrote in his journal that night, “After months of want and hunger, we suddenly found ourselves able to have meals fit for the gods, and with appetites the gods might have envied.” In fact, as we could realise today, the rocky point and along the cliffs around are home for a quite large Chinstrap penguin rookery (around 5000 pairs). Fur seals, and a few Elephant seals regularly use the place as well.

Once the cruise is finished we embark the Europa, that lies at anchor rolling in the swell and surrounded by brash ice. From then on we finish sea fastening the ship and soon start our way that would probably take 5 to 6 days to reach our next destination, South Georgia. Hard to believe that we will sail the very same route that the precariously refurbished open boat James Caird did more than a hundred years ago, with Shackleton, his great Captain and navigator Worsley and four of their men. First we get off the proximity of the coast and head North for more open waters. There we start setting all canvas, starting before lunch and finishing shortly afterwards. Europa sails her way under full sail but the Gaff Topsail. The wind picks up gradually from 10 to 20 kn, with variations up to 25 kn. Mostly in the afternoon it becomes a bit stronger, first we take away the Spanker, then, and as we sail almost Close Hauled, the Europa starts heeling to Starboardside. Time to take away the Royal Staysails. During the afternoon we take advantage of the good sailing and relative stable conditions for taking apart and cleaning our zodiacs. For that we also have to take away the Deckzwabber. After dinner we brace a bit more square, sailing now between Broad and Beam reach, trying to gain terrain towards the North on a 020º course, racing at 8 kn on 20 kn of Westerly winds.

The actual course to follow is more Easterly but the wind is forecasted to be veering from W-ly to NW-ly and increasing, so better sail a bit more northwards now and then fall off a bit under stronger wind conditions.