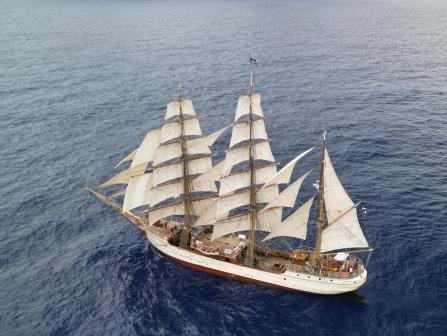 It's a steady office today, the chair not tipping towards the wall opposite of the computer, the keyboard staying put. The temperature in the radioroom is a pleasant 25 degrees, with a gentle breeze supplying ventilation.

The thick clouds have cleared, the stars are out. Amongst them, the Southern Cross has finally made it above the horizon!

Twenty days have passed since my last report, and ten since starting and never quite finishing another blog for you. Now the little doldrum-storm from the latter is old news, the endless motoring days are past tense are the equator and the Northern Hemisphere. We passed under the sun at 12°S, and now it travels through the North instead of the South. In short: We truly have arrived in the Southern Hemisphere!

Far away now also the stench of pollywogs and land lubbers: King Neptune has paid his visit, his court was held. We are all proper ocean creatures now, a ship full of shellbacks! Punishment has been plentiful and not fair at all. Maybe that's why the kobolts are chilling out in their hammocks somewhere, not bothering to bother. We did plenty of pranks and teasing ourselves.

As we are closing in on the Brazilian coast, other ocean creatures become more frequent visitors. Yesterday we had a school of common dolphins playing in the waves. For a week or so, we also had some hitch hiking birds two boobies, later three whom the voyage crew named Thomas, Claudia and Gregory.  Our winged companions seemed to multiply magically, and one night we had a frigate of 16 shadows hovering in the air around our ship, alternately black shapes against a nearly black sky or white bodies lit by moonlight. I am not decided which was more creepy.
Frigate birds are big, heavy animals, almost like giant bats, or maybe vampires, depending on the shade of darkness. As we can tell from our daily deck wash, they did not only enjoy our company. Apparently they really enjoyed having their toilet cleaned on a daily basis.

The wind is still not as reliable as we would wish, and so we follow it around: setting sails, taking them down, bracing sharper or more square, sheeting in, sheeting out. Yesterday we had a bit of trade wind feeling again, with stunsails flying on our port side. The easy sailing of the last couple of days has made our kobolts lazy. No major dramas anymore, even the computers are working fine. Don't worry, there's lots of wood to touch right now and quickly, too, so I hopefully won't jinx the temporary peace!

3111 nautical miles into our voyage, we are more than half way, and the voyage crew is slowly turning into expert sailors. They are quite fluent now in the language of the lines and sails, and sentences like "Ease the Main Topgallant Staysail tricing line" or "Take up on the Fore Upper Topsail Leeward Brace" are met with understanding nods instead of blank stares.

Only another 2250 miles to go to Puerto Madryn!