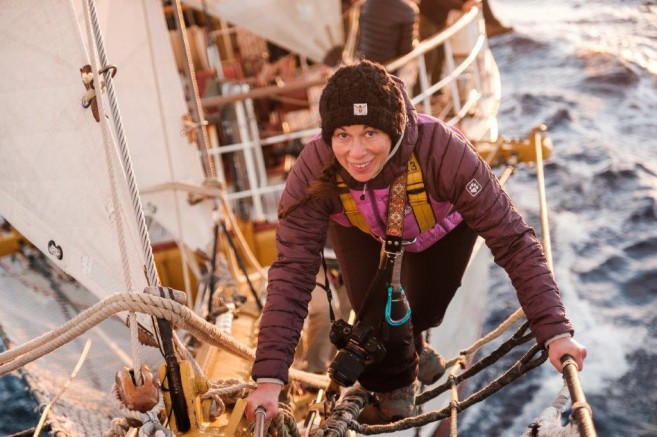 Still under the influence of the anti-clockwise light wind spinning around a centre of relative High Pressure System, we got a windless start of the day. The few Staysails that were set last evening were taken away and quickly furled with just an easy gasket around, ready to be set when we cross paths again with more favourable winds. But still for a while the very light Easterlies almost blow on our nose. But soon during the morning the predicted wind shift came, first coming from the North and rising to 17-18kn. Engines keep helping our progress while we set Lower and Middle Staysails together with the head-rig. And during lunch, under winds becoming more and more fair it was clear that was not going to take much longer to unfurl and set the rest of canvas. And so it was, after the change of watch at 14:00h a few of us don harnesses and climb aloft to get Top Gallants ready while Top Sails are being set. By then a good 18kn breeze from the N by W was pulling us already at 6.5kn and the engines were turned off. From then on it just got better and better for setting more sail and enjoy once more the awe-inspiring South Atlantic sailing under favourable seas and weather. Royals and Gaff Top Sail soon join the rest of sails set, while the partially cloudy day started clearing up announcing the splendid sunset we had. The warm light of the setting sun first dye the rig then the scattered clouds in the sky. At the last moment, when the sun’s upper rim touches the ocean horizon just before disappearing until tomorrow at dawn, a short but clearly visible green shine could be seen. Again, we could all witness for the second occasion in this trip the relatively rare optical effect of the “Green Flash”. To observe it, a clear horizon and clean air are needed, together with the luck that the shorter wavelengths of the visible light (violet, blue and green) refract in the appropriate way through their horizontal passage along the lower atmosphere. A great end for yet another nice day at sea. We are back to sailing, pulling ropes and climbing the rig, all in conjunction with receiving more information about photography and navigation, as our crew and guides are offering lately. Richard talked about black and white photography. He’s been taking black and white photographs of crew during their coffee breaks throughout the whole voyage. He shared some of his pictures and techniques he used to achieve a similar result. He touched upon lots of subjects, starting with brief introduction to old ways of developing black and white photographs and how those techniques relate to today’s modern digital tools we use as photographers. On the other hand our Mate Finn kept going with a second lecture on Celestial Navigation, today explaining how to calculate the Latitude at Apparent Noon using traditional methods. When the sun crosses the meridian it will reach its highest point and will be equally far away from sunrise and sunset. This moment is also called Meridian Passage or culmination and it represents the most relatively easy time of the day for positioning. At the moment of the MP, the true bearing of the sun will be 000° or 180°, depending on if you are North or South of the sun. At this moment the latitude can be computed by using two simple formulas, calculating the so called Zenith Distance (the corrected sextant measure altitude of the sun that is subtracted from 90°), together with knowing the declination of the sun at the meridian passage (tabulated on the Nautical Almanac). More complicated than many though before, Celestial Navigation is a full schooling and practicing subject, to which nowadays not many are used to. Loosing all the romantic remembrance of the old times, difficult sailing, dead reckoning, often even guessing the positions and the necessity of endless calculations to put the ship in the more… or maybe less accurate charts and maps, the present times had gifted sailors with GPS, Radars accurate watches and even different types of compasses amongst other technological navigation instruments.