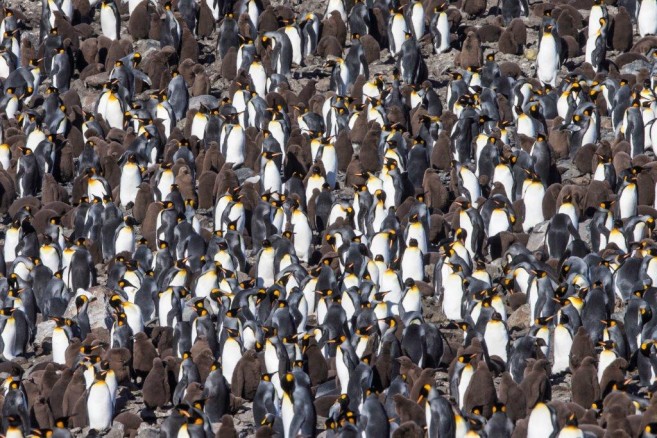 Great sunrise on calm waters and windless conditions welcome us to the new day. After the past windy days, South Georgia looks like had decided to give us another journey to enjoy the sun. Sure, it will not last, but better to take advantage of it while possible. And indeed, at arrival to the wide-open beach of the famous St. Andrews, sun shines and there is not even a single cloud in the sky. It is quite a rare opportunity to enjoy this spectacular site with flat calm seas and exceptional weather. At the back of the penguin crowded coast, rise the high mountains of the Allardyce Range. Today all of them visible with their glaciers glistering in the sun. From south to north we can see first the low mount Fagan, Brooker (1881m) and its neighbor Mount Kling (1845m), the steep pyramid shaped and highest in the area Nordenksjold (2354m) and the far background the majestic Mount Paget show itself as the largest peak in the island with its 2915m above the sea level.

St. Andrews itself is the long beach and grassy meadows over the outwash plain of the retrieving glaciers Heaney and the combined Cook and Buxton, now all of them far inland showing their wide melting fronts to frame the lower part of the vast panorama.

Just the landscape values themselves are worth a visit, but what makes St. Andrews even more special is the large rookery of King penguins that found a swarming home here. An estimated amount of about 150.000 to 200.000 breeding pairs makes this place a legendary stopover for visitors, photographers, filmmakers and scientists. It surely is the largest colony of this species in South Georgia and actually, one of the largest in the world. They gather at the plains and around the lagoons left behind after the retreat of the Cook Glacier. Once come we came across Captain Cook, after who the glacier is named. A couple of lines about him as a reminder of his crucial role on South Georgia: It was him and his crew on board the Resolution in January 1775 who first landed at the island. He took possession of the land and shortly afterwards he discovered it was detached from the, by that time, hypothetical southern continent he was searching, thus being an island. Disappointed, he mapped and charted the coastlines and set sail eastwards where he discovered the South Sandwich Islands. On his quest for Antarctica, he actually circumnavigated the continent unfortunately without catching a glimpse of it.

Such an amazing place wouldn’t be complete if not spiced up with an adventurous landing beach and some difficulties to reach the hills overlooking at the main penguin colony. Once we managed to land, the most famed nature’s bounty of South Georgia reveals itself. The ubiquitous King penguins are spread over the large beach and all the way up the grassy hills, while close to the landingsite different groups of Elephant seals snooze their moulting time. Young and mature individuals gather in separate haul-outs, leaving space to easily approach them. This time not many Fur seals pups playing in the water act as a welcoming committee, but instead inquisitive penguins approach us as soon as we land.

Walking along the coast towards the moraines of Cook Glacier, a meltwater river from the neighbor Heaney Glacier have to be crossed. A quick look was enough to reveal that today it carried a relative large amount of water. Our guides have a scout up the stream and decide where should be better for all to cross. Freezing water pour over our rubber boots while we help each other holding on against the current. But this incredible place, in such amazing weather is well worth wet and cold feet. Little price to pay to sit under the sun in South Georgia, overlooking its largest concentration of King penguins, surrounded by its mighty mountainous landscape.

The colony remains half hidden to view until negotiating several low moraine ridges, but once on top of the last one, the spectacle is overwhelming. It is not to wander why many documentarists use this site for their purposes. Each scale-size is filled with something astonishing. First the grandeur of the whole scene, then we stop our eyes on eye catching structurers inside the rookery, like concentrations of chicks, ponds or the glacier front at the background. Finally our eyes adapt to the smaller details, here a feeding chick, there a pair-bonding couple, next to them a trumpeting penguin calls its youngster. Blue skies and warm temperature help us all to sit and soak into the nature of such a fantastic place.

The way back to the landingsite went along the outskirts of the colony and the flat beach. By now we are now seasoned on river crossing and returning to the pick-up point went smoother than earlier, as now we all know what to expect.

Lunch was being prepared on deck when we embarked, a gratifying meal under the sunny skies after all this morning’s impressions.

Soon the anchor went home, and off Europa went on her way south looking for wind to sail. It took a while but gradually along the afternoon it became windier as it became hazy.

Gently motoring our way on calm conditions before we could hoist any canvas, the crew is busy aloft bending on the repaired Fore Course, that ripped apart days ago. A lighter replacement has been set since then, but now is time again for the heavy duty one.

Before coffee time sails started to be hoisted and soon the engine went off. On increasing fair winds we are busy on deck setting all Square sails, Lower Staysails, Spanker, Mizzen staysails, Fore Topmast Staysail and Inner Jib. The fantyastic afternoon of good sailing lasted until diner time, then sails went down and had to be furled, just when dropping both of our anchors once more, expecting strong N-ly winds for tonight at our anchorage in Cooper Bay.