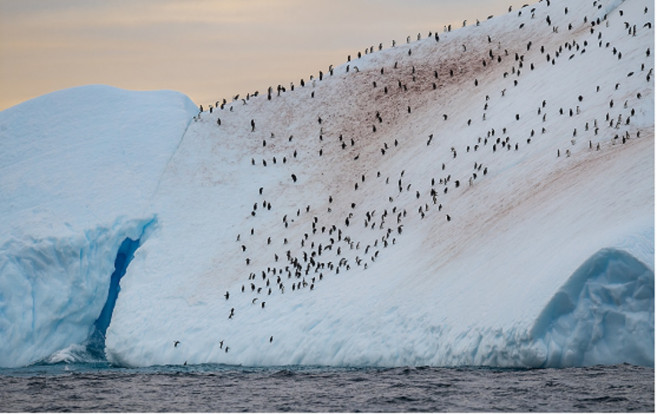 Europa left Deception Island behind last evening, and started facing the 120nm of the Bransfield Strait open waters. A course that will bring her to the Antarctic Sound, northern tip of the Antarctic Peninsula and the entrance to the Weddell Sea.

Fair winds pulled the ship under her Fore Topsails and Fore Top Mast Staysail at a good speed overnight, but the early morning brought a calmer weather, slowing us down.

Fickle Bransfield Strait, within few hours changing from 40kn to barely any wind, extends for about 200nm on a ENE-WSW direction, separating the South Shetlands from Trinity Peninsula and the Joinville Island group. Named after the Captain Edward Bransfiled, an important historical figure that played an important role on the official discovery and charting of the South Shetlands and the Antarctic Continent, dating to the early explorations between 1819 and 1820.

Sure they also struggled with the largely variable weather and winds characteristic of the area, pulling ropes, adjusting sails, braving storms or drifting around in light winds. Unlike in the old times, on windless occasions at least the Europa counts with two reliable engines to keep making way in a desired direction. A resource that she had to hold on to again when during the morning the strong winds became just a light breeze. Opportunity taken by the permanent crew to finish some jobs on deck and to start a more proper sail training program for everybody. A theoretical talk in the deckhouse about the sails, how they work and how to manage them, was followed by a hands-on, with the most eager ones amongst us grabbing a coat and getting on deck for a more practical exercise.

Under the coaching of the crew, keen hands let go buntlines and clues, others pull sheets and halyards, and before lunch Main Top sails and Fore Top Gallant are spread to the light breeze, and the engine turned off. With the amount of miles left to reach tomorrow morning’s landing, we can have the pleasure of progressing at a slow speed and gradually make our way under sail towards the Antarctic Sound.

All work on deck during the morning was done while the ship sailed amidst the fog, but as it lifted just about lunchtime, the Antarctic Peninsula revealed its glaciers and mountains that lay at barely 40nm from us. With the improvement on visibility came also sightings of the numerous whales that swim around. Many blows could be seen at the distance, but now and then a Fin whale or a curious Humpback decide to have a closer look at us.

This time of the year represents almost the end of their feeding season in the high latitudes, and after storing enough fat in their bodies, now is time to start thinking on migrating to their breeding grounds at the tropical areas of the world’s oceans.

Numerous icebergs appear as well, from small bergy bits to larger ones. Chinstrap and Gentoo penguins seem to enjoy a ride on one of them. Off their rookeries, already finished their breeding season, they have a preference for climbing onto drifting ice to rest between foraging trips and before disappear into the sea as the autumn makes its way forward at the end of the Antarctic summer.

Cape petrels and Southern fulmars fly around the ship as well, and a lonely Black browed albatross soar in search of nourishment, far south of its Subantarctic nesting sites.

Slowly the Europa makes progress, leaving behind the open waters of the Bransfield Strait and entering the Weddell Sea, to an area rich in exploration history, starting with the beginning of the 19hundreds Swedish expedition. Antarctic Sound, gate to the Weddell, it is actually named after the ship used by this same famous expedition. Well known by the scientific advances made during their overwintering (including setting the basis for the theory of continental drift as described by Wegner)  it is just as famous for the events that followed the loss of the vessel and the saga of survival the expedition members went through. It all started in 1901, when the ship the Antarctic left from Sweden led by the 32-year-old geologist Nordenskjold, with the Norwegian Larsen as a captain. The plan was quite straight forward: the Antarctic would drop a party of five off South in the Weddell sea, together with a prefabricated hut and 8 sledge dogs. They would carry out research during the winter and be picked up during the next summer. Ice prevented going very far into the Weddell sea, so they established their base at Snow Hill island. They spent the winter, went on a long sledging journey mapping the coast South of Snow Hill and when the next summer came, they started waiting for the Antarctic. This is where planning was taken over by faith and happenings that, in Nordenskjold’s own words “makes one’s whole world of sense seem to resolve into mist”.

Approaching all those illustrious areas, the capricious Bransfield Strait winds died down making for dousing some of our canvas and furl it. The rest of the way to the Western coasts of Joinville Island will be done slowly under engine. Nevertheless the gradual weather improvement during the day led to a great sunset, actually being the first time during the trip when we could all enjoy a bit of sun bathing the ship’s decks.