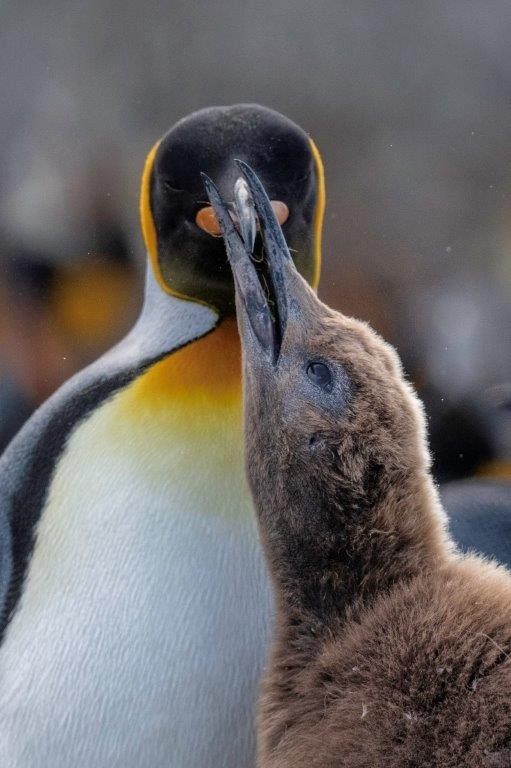 Sunny morning and calm conditions welcomed us to this new day. After the variable wind forecasts, we have been having lately, it was a cheered surprise to wake up on our way to the beautiful St. Andrews Bay in such favorable situation. For sure the good seas and blue skies over the mountains surrounding the wide-open bay will not last, so better take the chance for this fantastic landing as we arrive. It is not often at all that the entire high mountain range at the background of the penguin crowded beach shine their glaciers under the sun. From south to north we can see all the so called Allardyce Range, first the low mount Fagan, Brooker (1881m) and its neighbor Mount Kling (1845m), the steep pyramid shaped and highest in the area Nordenksjold (2354m) and the far background the majestic Mount Paget show itself as the largest peak in the island with its 2915m above the sea level.
At their feet extends the long sandy beach and grassy gentle slopes of St. Andrews. Clearly having its actual shape and easy walking characteristics as a result of the sediments accumulated by the
retrieving glaciers Heaney and the combined Cook and Buxton. Nowadays all of them show their melting glacier fronts at the background of the stunning scene. The inhabitants of such a privileged location are a large number of King penguins, Fur seals and Elephant seals. In fact, what makes even more of a special location out of St. Andrews is the large King penguin rookery that it hosts, with an estimated number of about 200.000 breeding pairs, being the largest in the island and why not, maybe in the world. The combination of everything turns St. Andrews on a celebrated stop for tourists, photographers, filmmakers and scientists alike.
They seem to huddle all packed on the flat areas peppered with small ponds, with great views over the retrieving Cook Glacier. And here, again we come across the famed Captain Cook, after who the glacier is named. It was him who first saw and chartered the bay, as many other places in South Georgia, on his legendary voyage of discovery on board the Resolution in 1775. Besides all those unique and beautiful qualities, St. Andrews is well known for its big swells crashing against the never enough sheltered ample open bay. But today, conditions at the shore looked pretty good, as it was soon confirmed by our guides who went before us to scout the area. Nevertheless due to the surge at the steep beach and the sudden weather changes that often occur here, Sarah, Richard and Jordi all wear dry-suits and are ready for any eventuality it should arise while conducting the zodiac operations and once we walk ashore. First thing to notice as we set foot at the long beach is the welcoming
party of King penguins, acting with great curiosity to check what was going on at their realm. Here and there Fur seal pups and some females play in the surf, and laying a bit higher up, a big Elephant seal beachmaster lays accompanied by his harem of several females. A bit late in the year, but anyway often found at this stage of the season. Non-pregnant or females that just reached sexual maturity age, they are not in a hurry to come ashore and give birth in October-November, but it could happen that they arrive later to the beach, where some of the males still remain waiting for them. In the peak of the breeding season South Georgia beaches are characterized mayhem, chaos and violent fights between the bulls, while those late harems spare all that. The inconvenience of that is delaying the molting period, with effects on their life cycles and the natural changeover between Elephants of different ages on their beaches.

After spending some time at the beach we started heading towards the main attraction of the landing, the huge King penguin colony half hidden behind Cook’s glacier moraines. To get there a bit of a short but adventurous walk was still ahead of us. It involved a crossing of the meltwater river flowing from the neighbor Heaney Glacier. Luckily today it was just carrying little water and could be easily dealt with, just molting penguins gather along their shores making us do some detours to find a free spot. Nevertheless few people got wet feet, a small price to pay to reach the viewpoints overlooking the vast rookery, surrounded by mighty mountainous landscape, and all under the sunny skies. Once there, the spectacle is overwhelming. No question why many nature documentaries use St. Andrews for their purposes. First our eyes catch the seemingly immeasurable panorama, to then start stopping on smaller scale details, like patterns and structures inside the penguin colony and at the end focusing on individual penguins with their chicks or eggs. Pair bonding behavior between couples and trumpeting adults calling their chicks made also for good pictures. Here, our guides spread the group between the three of them along the moraine ridge that offers the best vantage point over the colony and prefer to keep quiet for over an hour letting everybody soak into the spirit of this
marvelous place. Even though some of us seemed to have enough with a few minutes of this nature’s bounty contemplation, we all squeezed to the end the highly valuable time here before heading back to the landingsite for yet another exciting zodiac embarkation. As our guides said, is not a place to let go on a quick landing when it offers its seldom kind and sunny face.
Before lunch we were all on board and not much later Europa heaved anchor and started her way further south along the island’s coast. With the weather forecast predicting strong N-ly winds, the best shelter to be found in a relative short distance is inside Royal Bay, in the small corner in it called Moltke Harbour. To reach it we use the rest of the afternoon, as 20nm are ahead of us. By 17:30h we dropped anchor at the shallow waters of Moltke, on quiet wind conditions and fair weather, that even got better during the night, leaving behind a starry sky. Conditions that we could all appreciate when the last activity of the day was done after our traditional after dinner meeting. As we were coming to the end of our stay in South Georgia, it was time to go through the photo competition entries for Antarctica part of our trip. During the past month we visited Antarctica and we all made lots of pictures. It is not always easy to select one photograph from many, but the rules for competition were one entry per person, per category. We had five categories as follows: Crew, Europa, Landscape, Staged and Wildlife. On 4th of March, the last day for entries, Richard judged the entries. Not entirely by himself. Since the photography is a very subjective art form, he asked few crew members to judge the photographs as well.

In the evening we set up the projector in the deckhouse and proceeded with announcing the winners. The event was full of fun and entertaining. Richard introduced the runner ups and winners for each category and short introduction to why the photos were selected and why they worked well. The winners were awarded prices from Europa’s bar and then night continued in the deckhouse as usual with bar open and good mood around. As the photo competition for Antarctica stage ended, the time for entries for photo competition for South Georgia has started.