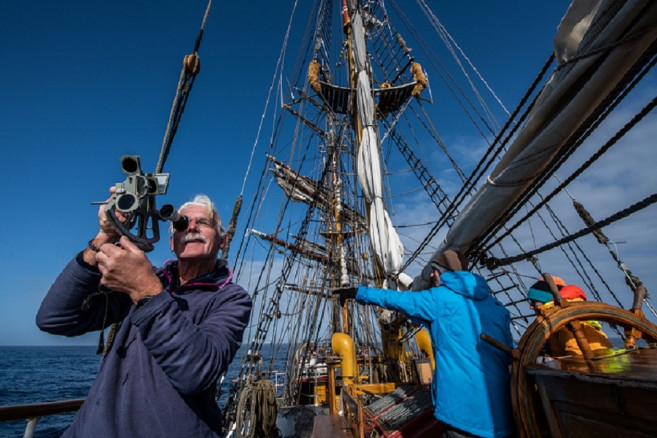 The ship increases her speed in the morning. Southwesterly course once more.

A morning and afternoon motoring under clear skies in open waters, situation with no comparison with the reduced visibility and difficult navigation from yesterday. At the distance on our Port side, the ever-present ice edge, shining under the sun. Out on deck a lucky day for practice taking sun-sights with the sextant, putting in practice the theory about Celestial Navigation explained already in a couple of lectures during the last days.

In our modern times, navigation is mostly based on electronics and satellite acquired information, but looking back in the past, we can just look up to and take our hats off for the traditional methods of positioning and navigation, that in one way or another has lead seafarers across the vast oceans for millennia.

The older system to estimate positions while sailing in the vast expanse of the ocean without any reference points from coastline or islands was based just on dead-reckoning, where the current position is calculated by using a previously determined one. From there and knowing the speed and course over a period of time the new location can be estimated. This process is subject to significant errors due to many factors as the speed and direction must be known precisely at all times.

Astronavigation came as an aid for more accurate positioning. Nevertheless the use of those methods require some mathematical skills and tools such as an accurate watch and a sextant together with a current Almanac with the schedules of the coordinates of celestial objects at set time and place, a set of sight reduction tables and a chart of the region. After all, at the end it is amazing to think that the sun, the moon and the stars, located at an incredible distance from our planet can be used to fix our position in any given point of the earth surface.

Besides give a chance to try our skills at the sextant, today’s good conditions helped as well to strip the Top Gallant yard from its old replacement sail and bend-on the newly repaired one. Halyards, block, lines and gaskets are soon readied. Sheets and Clews are taken off the sail up in the yard. Robins are cut and swiftly the old sail is lowered on deck. The repaired one is ready to be hauled, stretched, tied up and soon is prepared to be set. But not yet. The breeze has still to increase and shift to a more Northerly direction for that. Anyway, with the light wind from the West-Northwest is enough to hoist the headrig, deckzbabber and Spanker keeping a Southwesterly course.

But as the day goes by, the sunny and relatively warm morning, combined with the low surface water temperature and the large amount of brash ice, translate in a foggy evening. A look at the tabular icebergs in the later hours of the day reveal how much they can affect their immediate environment with its large volume of frozen fresh water and their cold temperature. They can have an affect on both alike, evaporation, condensation in the atmosphere; eddies, changes on currents in the water.

The wish for more favourable winds waited until nighttime to be granted, and they came with an increase in the visibility as well. Then over 15kn of Nort-northwestely winds start blowing. Eager hands climb aloft to unfurl canvas, others are keen on setting the sails gradually readied, pulling ropes from our decks. Topsails are followed by Top Gallants, Courses, Royals and Middle Staysails. 4, 5, 6, up to 6.5 kn  of speed register on the screen, on a good course towards the Antarctic Peninsula. Where to exactly? There’s no such absolutes in our way of expedition voyaging. Ideas about destinations we have lots, plans are laid up. But winds, weather, seas and ice have their own mind. Getting closer to Antarctica, the beginning of a new strategy game.