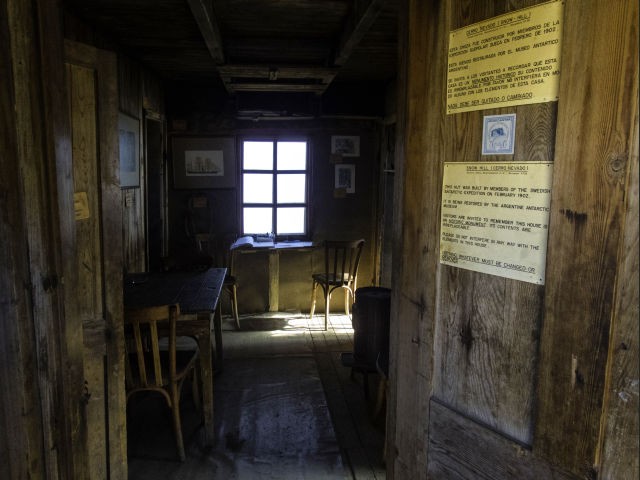 Snow Hill Island and Coley Glacier –James Ross Island) We made it! After years trying to reach Snow Hill Island through the Weddell Sea ice, today, 20th of February 2017 we managed.

The place has been forbidden to Bark Europa for years due to the sea-ice and iceberg infested waters. Snow Hill Island was named in January 1843 by the Antarctic explorer James Clark Ross. Its name comes from the snow-caped hills that cover the 33 km (21 mi) long and 12 km (7.5 mi) wide island almost completely, contrasting with the bare ground of nearby Seymour Island. It is separated from James Ross Island to the west by Admiralty Sound. The island gained its fame because it was the place used by the Swedish Antarctic Expedition to build their base camp. This expedition was led by Otto Nordenskjöld on board the Antarctic. They spent the winters of 1901, 1902, and 1903 there, using it as a base to explore the neighbouring islands and the Nordenskjöld Coast of the Antarctic.

The hut is nowadays maintained by the Argentine Antarctic program and is the Antarctic Historic Site Monument 38. Our landing was organised around the visit to Nordenskjöld’s hut and then to enjoy the great views from the surrounding hills. Nowadays the island has strict rules for visitors due to the historic value of the place. Therefore the guides had to organise groups of 10 people in order to go onto the platform where the hut is emplaced, and in groups of 5 people inside the hut. All these measurements are taken to keep the place in good shape so the next generations can visit it as well and have a glimpse of the conditions in which the early explorers were living. Besides enjoying the hut itself, the views from up the hills were astonishing.

We had the privilege of contemplating the magnificent scenery of the Erebus & Terror Gulf and their ice filled waters, as well as our ship at anchor among the small floating bergs, with the great James Ross Island landscape in the background. All under blue skies and sunshine. Having a look at the soil where we were walking we realise that the whole place is filled up with ammonite, shells and snail fossils, and the virtual absence of plants, mosses and lichens over the barren ground is remarkable. Moreover we have the honour of being here at the Weddell Sea on a very special date. On this very same day 20th February 1823, James Weddell, a Scottish whaler and explorer, and his crew discovered this vast body of water east of the Antarctic Peninsula, naming it King George IV. In 1900 the area was renamed to Weddell Sea. After finishing this landing we heave anchor and motor our way out of the Admiralty Sound, heading to the northeast corner of James Ross Island through Markham Bay. Once we arrive there without much difficulty, due to the relatively small amount of ice and quite open waters, we could see a great spot for visiting this afternoon. We head towards the amazing-looking Coley glacier front.

There we take the good chance offered by the good weather and calmer winds inside the nameless bay just north of Cape Gage, and spend an hour ship-cruising along the edge of the ice cliffs. This area was just surveyed in 1945 and 1953 by the Falkland Island Dependencies (FIDS), nowadays renamed as the British Antarctic Survey (BAS), and named for John A. Coley a meteorological assistant from their team, based at Hope Bay in 1952 and 1953. Looking around us we can see how the landscape has been formed: the top surface of the mountains surrounding the vast glacier is a quite even basaltic plateau with a couple of erosional towers. At the base of the thick and dark basaltic layer, a yellow material can be seen, probably sandstone, shale and pebble conglomerate. Approaching the glacier front we come across depths of 45m on its northern side, but rapidly falling to approximately 150m as we make our way southwards slowly drifting with the northerly winds. It is hard to imagine that just at about 100m away from the ice cliffs the waters can be so deep, giving us an idea of how thick the glacier front can be, with just a small part of it exposed over the surface and the majority being submerged.

Areas of brash ice originated from recent calvings are scattered along the bay. We were all on deck enjoying the sun, blue skies and the extraordinary scenery for a while before resuming our way towards Paulet Island, where we try to arrive in the morning. As soon as we get out of the Coley Glacier bay we face 15 to 20kn headwinds again, like it has been for the whole day, with the temperatures barely rising above 0º, even under the sun and clear skies. The rest of the afternoon and evening is used to gain distance on a north-easterly course to approach tomorrow’s destination. The ice conditions become gradually denser and denser until finding ourselves dealing with heavy ice during the night. All flavoured with below zero temperatures and strong north-north-westerly winds blowing 25 to 30kn making our progress difficult and squeezing all concentration and skills from our mate Elskarin and bosun Matt, later helped by captain Eric, trying to steer the Europa on the sea of ice. Engines roar, in forward and astern, as the ice floes growl against the hull, while trying to find good leads amongst the pack ice. Jordi and Eduardo

Like Simon, this makes me really happy! So glad to hear you made it, Jordi, even if we didn't. Better luck next time.

Delighted to hear you made it! Never a possibility for us in December, but that one photo through the hut door makes me want to return for another go!

Delighted to hear you made it! Never a possibility for us in December, but that one photo through that hut door makes me want to go back for another go!