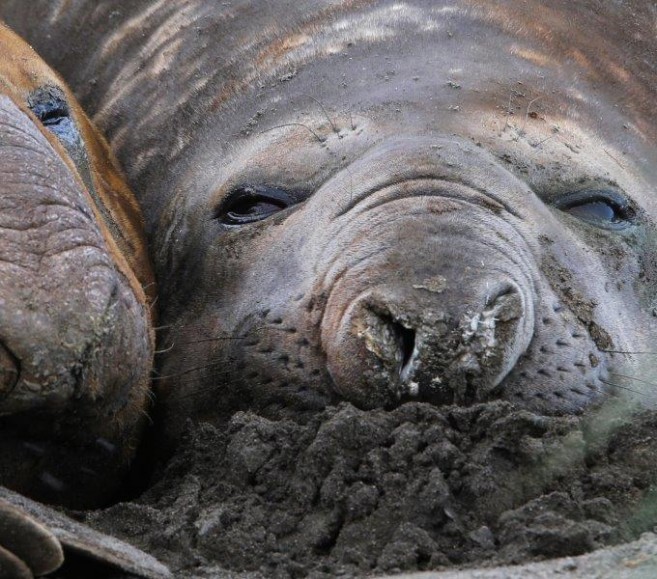 Landing at the old Norwegian whaling harbour of Godthul was a funny experience. We landed close to a couple of old "jolle", whaling boats used for cutting up blubber next to the floating factory ships.

There was an enormous amount of whalebones scattered along the beach, the factory ships used to get rid of the carcasses and whale skeletons simply by letting them float away and they ended up on the shore here in Godthul. There was a beach that was off limits and above the beach the hills seemed to rise up rather quickly. We found sort of a path leading up, which however disappeared quickly and we were facing a somewhat impenetrable forest of uneven tussock grass.

Onwards we went, and it seemed like a good jungle knife would have been a handy tool here. I felt like I was in Jurassic Park, pushing through the grass that in some places was higher than I am. Somewhere above me I could see a patch of blue sky and everything else around me was just green. Someone suggested I should maybe bring a red umbrella next time so that people behind me could see where I'm leading them. Behind every other grass patch there were upset fur seals growling through their teeth, protesting such invasion of their private space.

I kept talking and clapping my hands here and there, trying to give the seals a bit of a pre-warning before stumbling on them through the grass, I could hear them growling left and right and the grass moved as they finally gave us way. They were just everywhere! We pushed onwards fighting our way through the seals and found a lone lost Gentoo penguin in the middle of this jungle. After some time the grass got a bit lower and we could walk through some almost even ground all the way up to the flat terrain above us. And what a view we had! A large lake in the middle, with a small creek meandering down to the bay. Mosses and grasses were partly covered in fresh white snow and the majestic mountains were rising up all around us. No wildlife was up there, just a few South Georgian Pipits, small endemic song birds that have been slowly recovering since the rat eradication project here started and their nesting sites became safe again. The sun came out and we enjoyed some quiet time before heading back down through the Tussock jungle. A wonderful little wildlife safari!

What an unbelievable job you have :-)!