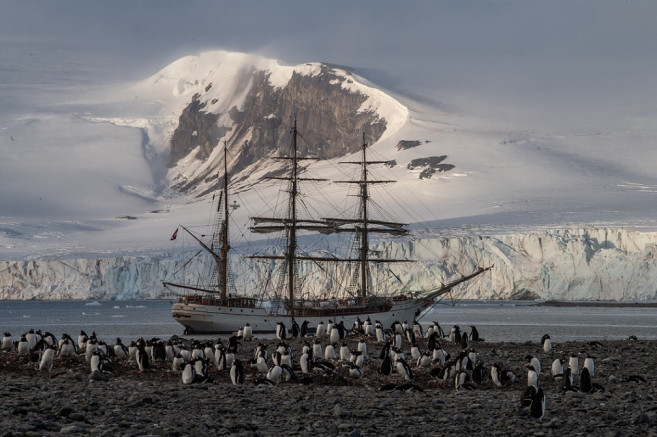 Livingston, Desolation, Greenwich, Robert Islands and the shallows and rocks awash that guard the northern entrance to the South Shetlands. By the beginning of the day Europa enjoyed the same dramatic and stunning view that William Smith had in 1819 when his ship ventured that further south, blown off a long way south from her trading route around the southernmost tip of the Americas.

By that time a desolate land, they were the first ones to report it. Nowadays the area is considered the gate to enter or leave Antarctica for the exponentially increasing number of tourist ships that operate in the area.

1578, 1616, 1772-1775, 1819, 1820.
Sir Francis Drake, Shouten and Lemaire, Captain Cook, William Smith, Bransfield and Bellingshausen respectively. Characters that made their way into the early history of the discovery of the Southern Continent. All aboard their wooden sailing ships Golden Hint, Eendracht, Resolution and Adventure, Williams, Vostok and Mirny. All memorable dates to remember on the step by step storytelling and pioneering expeditions finding Antarctica. Illustrious Captains and not to be forgotten ships names.

First the privateer for the English Crown Sir Francis Drake found open waters south of Patagonia, then Shouten and Lemaire sailed around the Horn confirming that there was no land closeby towards the south. Over a 150 years later Captain Cook was sent in a quest to find an hypothetical southern continent, which he never spotted despite doing a full circumnavigation of Antarctica. The world had to wait until 1819 until the first sight of the white continent was confirmed and even a year later until the first human footsteps walked its lands. This discovery led to a large-scale commercial sealing and whaling in Antarctic waters, that greatly affected the populations of those marine mammals.

Nowadays their populations are recovering. And today we were witness of this process when along the journey several Humpback and Minke whales were spotted, distributed around a big area around the South Shetland Islands, part of their traditional Antarctic feeding grounds.

Laying between Greenwich and Robert Islands is the so called English Strait, the channel of our choice to sail in-between the South Shetlands and head towards the planned landingsite for the afternoon. As approaching it, we drop all the squares first and the Outer Jib, with many hands on deck pulling clews, buntlines and downhauls while others don harnesses to climb the masts and furl the canvas. Lower Staysails were still set until we get close to Fort Point. The spectacular 85 m high rocky outcrop that forms the Southeast extremity of Greenwich Island. Its name is considered quite descriptive of the feature. A narrow isthmus connect this headland with the glaciers that cover Greenwich Island.

Here is where the Europa drops anchor before lunch and the zodiacs are readied to bring us ashore.
A truly gift of a site. A rough scenery combining sheer cliffs resembling a fortress, boulder beaches, calving glacier fronts, and a Nunatak sticking out of them. Home for both Gentoo and Chinstrap penguin rookeries. Up the slopes some Cape petrels, Skuas, Kelp gulls, Antarctic terns and Blue eyed shags nest. At the shoreline some Weddell seals snooze and a solitary Elephant seal is taking a rest too.

The surge at the rocky coast didn’t help for an easy disembarkation, but once ashore the landscape and the wildlife overwhelmed our senses on our very first steps ashore in Antarctica. Gentoo penguins take care of their pretty large chicks, while some of the late ones still lay on eggs. Next to them the Chinstraps are busy in the same occupation but those ones remain packed tighter in their colony. At the opposite side of the narrow land strip, the glacier that now and then calves and roars and fills the beach with brash ice could be also visited.

Further up, we managed to climb the icy slopes that melt in the shape of a ring around the pointy peak that pierces through the glacier. A whole lot of different experiences packed together around this relatively small but most outstanding site.

Back on board, Europa makes her way towards Yankee Harbour, indenting the Southwest side of the same Greenwich Island, the the next place to visit after an early dinner. Its narrow entrance, runs between Glacier Bluff with its 30 meters high ice cliffs, and Spit Point, a low and narrow gravel spit. Once passed the narrows the harbour opens in a large bay where the ship drifts while we spend the evening ashore. The glacier roars and growls for the duration of our visit, small calvings fall here and there. As a result, brash ice gradually piles up along the outer shores of the beach.

Yankee gets its name from the American sealers that started operating here as soon as the place was discovered already in 1820. Some remains of their operation still lay at the beach, like a large trypot used to render the Elephant seal blubber into oil, much appreciated during that time.

At the present, the Elephants are coming back to Yankee, spot that also represents a preferred site for Weddell seals. Walking along the long and narrow gravel bar that characterises the area also we came across a resting and moulting Leopard seal and the old remains of a Crabeater seal carcass, showing its unique dentition adapted for its specialised diet on Krill. Further in the bay a large flat area at the foot of a rocky high hill is home for a Gentoo penguin rookery.

At night, when we left this superb landing, Europa started her way to Deception Island, where the plane is to spend the whole of tomorrow. The fair wind bowing from the Northwest along the Bransfield Strait made for setting some canvas, first the Lower Topsails, then the Uppers, making enough speed in the chosen direction to stop engines and make good progress under sail for a few hours.