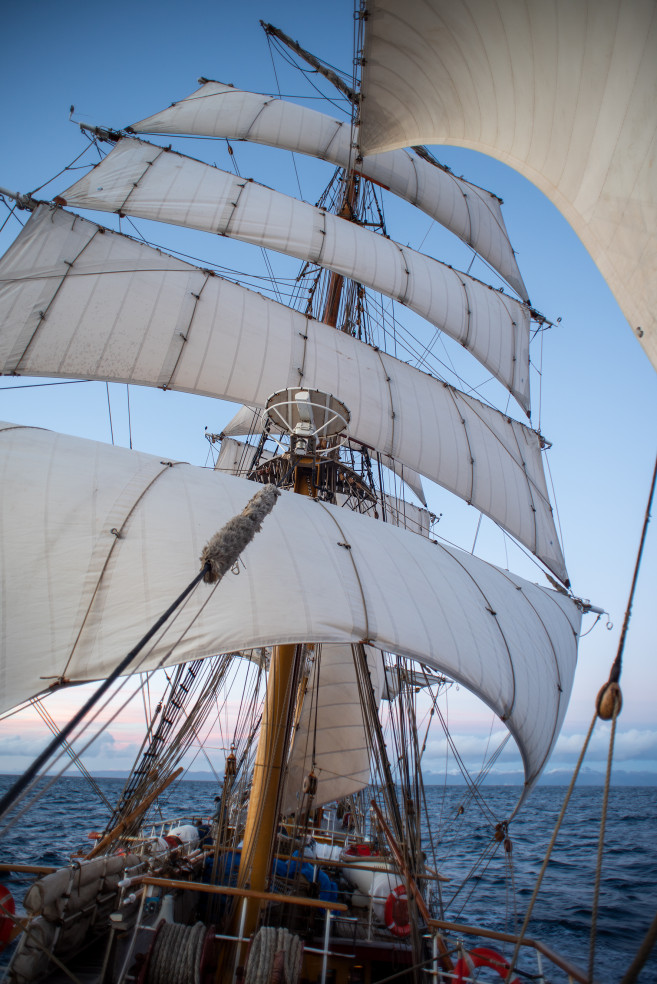 “The simple act of sailing had carried him beyond the world of reversals, frustrations, and inanities. And in the space of a few short hours, life had been reduced from a highly complex existence, with a thousand petty problems, to one of the barest simplicity in which only one real task remained—the achievement of the goal.”

In the morning, Europa leaves behind the Southernmost city in the world, after casting off her mooring lines and welcoming the mandatory pilot that will share the wheel with the Captain and Mate until the evening, when reaching the Beagle Channel Atlantic mouth. No other city to be seen by us until the first week of April, when our arrival to Cape Town is scheduled.

Prior to departure all of us attended the Safety Instructions and drills that must be done before departure.

With a compliment of 48 in total, the ship is ready and provisioned for the seven-week journey ahead of us, through the famed South Atlantic and Southern Oceans.

As we make our way, more familiarisations and instructions were given by the permanent crew, including the introduction to our duties aboard, like steering, lookout, line and sail handling, including learning how to safely climb aloft to help the crew furling and unfurling sails or just for the sake of taking a good picture.

Not long after, we all join the watch system to follow until reaching land again in a few days. The Antarctic South Shetland Islands are our first goal.

As we make way Eastwards along the Beagle Channel, Tierra del Fuego Island frame our Portside, while Navarino Island unveil its forests and mountains at Starboard.

Although the whole archipelago had been inhabited since immemorial times dating back to about 10.000 years, nowadays we all know their modern denominations after the first Europeans ventured into these waters:

A bit over 500 years have passed since the European discovery of the Straits of Magellan, when Ferdinand Magellan fleet sailed through it. After many months at sea and exploring lands and coasts further north in South America, they found this waterway, and while making their way they spotted countless fires burning along the shores, lighted by the indigenous Yaghan people. Feature that lead to name the island with the graphic and now legendary name of Tierra del Fuego (Land of Fire).

Long time had to pass until the first Europeans sailed further south and disembarked at Navarino Island. Jacques l'Hermite's fleet set foot at Navarino shores in 1624. But it was during the two expeditions of the HMS Beagle between 1829 to 1836 when it was named, after the then-recent Battle of Navarino (1827) which was a turning point of the Greek War of Independence against the Ottoman Empire. HMS Beagle, first under the command of Pringle Stokes and then Robert FitzRoy, sailed along the channel that nowadays bear her name, representing the European discovery of this second waterway connecting the Atlantic and Pacific Oceans.

Leaving aside the many discoveries and great cartographic work done during her expeditions and adventures around the world, it was on her second trip between 1831-36 when she sailed with Charles Darwin on board. A man and a voyage predestined to change and turn upside down the way we see an understand the world and life itself.

Times had changed since and modern circumstances are completely different nowadays. Millennia passed from the indigenous era and hundreds of years since the Golden Age of European Exploration and trade. Nevertheless, the harsh climate, the battering from heavy storms and forceful winds have been always a trademark of this rugged area, still to be endured by the technologically modern cruise, tourist and cargo vessels. Countless make their way along the Beagle Channel side by side with sailing ships and fishing boats, which represent a large portion of the local economy.

Motoring at the beginning along this famed waterway, soon after the afternoon coffee-time the Pilot got off the ship, then Permanent and Voyage crew climbed aloft to unfurl Top Sails. The characteristic though variable W-ly winds that usually blow along the Beagle Channel soon made for setting the Fore Lower Topsail and turn the engine off. The Fore Upper and Main Lower Topsails followed not long after. Gradually getting off the shadow of the last islands of the Beagle Channel (Picton, Nueva and Lenox), it seemed that the wind was starting to get more stable, making for adding Fore Top Mast Staysail and Inner Jib to the sail configuration. But not being yet clear of all the land effects over the windfield, a couple of engine touches here and there were still necessary until reaching the open ocean. Then setting more canvas followed during the next hours, together with bracing Close-hauled. At night, the swell and stronger winds of the Drake Passage began to be felt by everyone. Opportunely, the deck safety lines and nets were already rigged, making for a safer and easier way to move around the ship.

Like that we all had our first contact with the complex network of lines and ropes that surround us on the Europa’s decks. A knotty complex that hopefully soon will untangle as the permanent crew show us how the system works. In the next days sure the ways through the maze of ropes will become familiar to us.

In the meantime, a small pod of inquisitive Dusky dolphins pays a visit, bowriding the ship for a while. This is a pretty small and robust species, widespread on the coastal waters and continental shelf of the temperate seas of the Southern Hemisphere. They are common and always welcomed sight in the area between the Beagle Channel and Cape Horn. Sailing along, the Europa also comes across flocks of Cormorants, South American Terns, Chilean skuas, Magellanic penguins popping their head above the water now and then, and some of the species too that will accompany us for most of our long trip, like first sightings of Giant petrels and Black browed albatrosses.