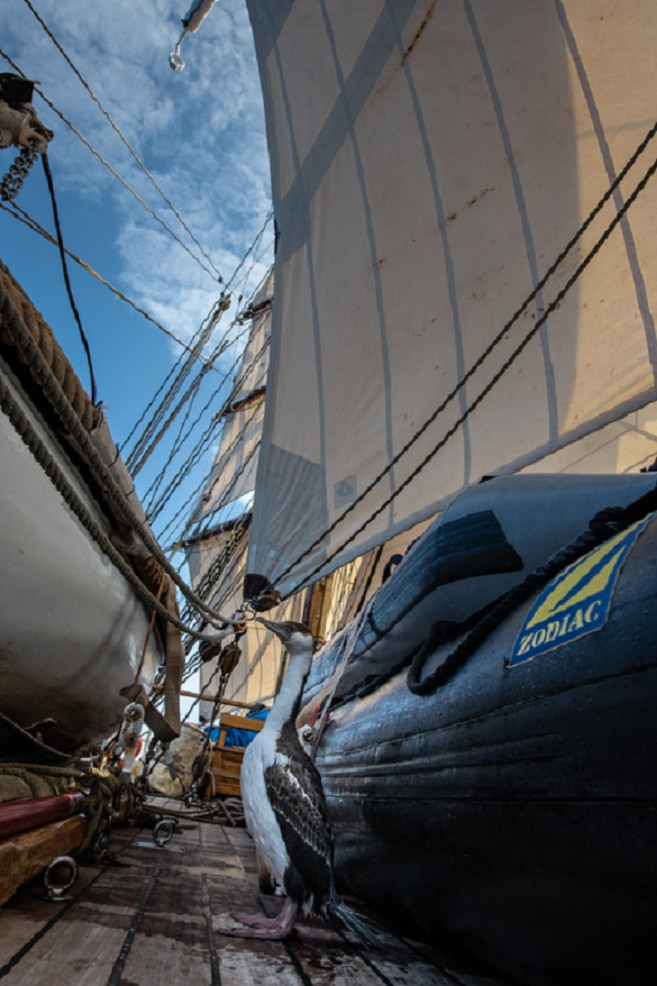 Drake Passage and arrival to the shelter of the Cape Horn Archipelago and Beagle Channel Islands. Abating conditions as the Europa runs northwards trying to be ahead of the forecasted strong Northerlies.

Drake Passage, Cape Horn, Southern Patagonia, all legendary denominations that not just stand for a challenge for navigators but sometimes also for the local wildlife.

Last night, a young Imperial shag seek safe port on the Europa. Probably blown offshore from the areas they inhabit on the Patagonian seacoasts, specially in the fjords and channels. The heavy weather and Westerly raging winds made for the bird to find a place to take a rest on our Sloopdeck. Up till the morning, Europa carries an extra hand on board, as it was still hanging around, taking a ride back home, now under sunny skies and easier seas and wind conditions.

Abating Westerlies allow to set more canvas once more. By the early hours of the day, Top Gallants are sheeted down and hoisted and over the main deck Aap is replaced by the larger sail Desmond.

When the windfield seems more steady, the Outer Jib comes up. A bit later the Royals join. All in the last attempt for some good sailing, heading north at a good speed and try to be as ahead as possible of the forecasted strong northerlies that will make for dousing sail and motor against them during the last bit of our crossing.

Maybe it has helped for improving the conditions and make for easier sailing and live on board, to take a picture of our naked lady Europa and try to present it to Poseidon, the god of the sea. Son of Cronus and Rhea he is the brother of Zeus, the bull that together with Europa proudly stand under our bowsprit as the ship’s figurehead. The fear of tempestuous weather inspired on the sailors all kinds of superstitions, including the one talking about exposing a nice woman naked upper body to the elements in an attempt to calm the stormy weather.

… many sailors believed that women made the best navigators. This was part of the reason why from the mid-1700s onwards the figureheads of large ships usually took the form of a nubile young lady in an otherwise bashful state of undress. Sailors also believed a woman baring her breasts to the elements could shame an angry sea into calming down, which might go some distance to explain why female figureheads became increasingly well endowed.

And calmer it got indeed. At midday the wind dies announcing a big shift. In not much time the Westerly become Northerly, slowly increasing during the afternoon and evening. Time for dousing all sails and pack them away, relaying now on our engines for the last bit approaching the Cape Horn Archipelago and the Islands that lay around. From the position where the Europa is by then, she can take advantage of the shelter given by those lands, and at least the rolling of the early afternoon on the still large swells become more steady over calmer waters and lower waves. She could make it ahead of the worst weather forecasted to come soon over the Cape Horn area.

It is not until late at night when her anchor drops close to the Atlantic entrance of the Beagle Channel.