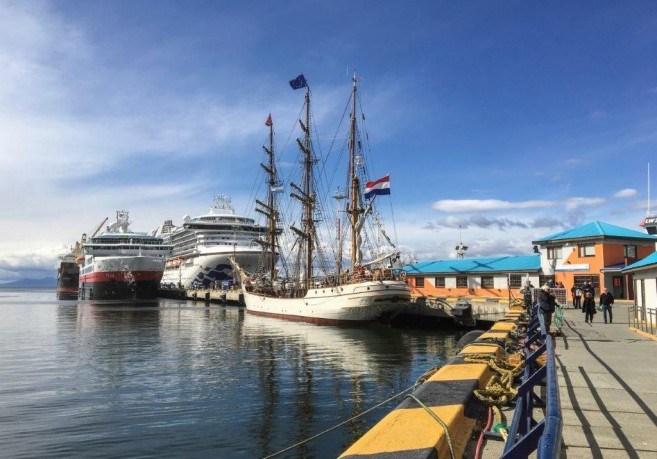 Some of us already had early flights from home and spent time having a look at Ushuaia, place that interestingly claims to be the “Southernmost City in the World”. Others just got here today. The Europa had moored alongside its harbor already a couple of days ago, just the necessary time for the full crew to undertake the countless and laborious preparations to get the ship ready again for her new adventure. It takes a bit of time and effort to put together a voyage of this sort on a Tall ship built in 1911, but this afternoon Ship and crew were prepared to welcome us aboard. 40 of us in total being the so called “voyage crew” embarked the Europa, joining the “permanent crew”. Some already seasoned sailors or old friends with the ship, others for the first-time signing-in on an
adventure of this kind, but all showing great excitement and enthusiasm to visit all those legendary places. At the port, Europa was dwarfed by other several bigger Antarctic-tourism motor vessels that met here today. All part of the rapidly growing fleet bringing people to experience a few days in Antarctica. Their crew and passengers pass by, showing curiosity and attraction for our “Old Lady”, being the only sailing ship of her kind that regularly visits the White Continent. As we check-in, the crowded port gradually becomes less busy as many of them pick up their mooring lines and sail away along the Beagle Channel. In the meantime we are welcomed aboard by Captain Janke and her international crew of 17. Still a few procedures were left to be done before we could spend the first
night in our bunks, or going ashore to enjoy the Ushuaia night-life, as departure time has been set for the morning. Timing planned to take advantage of the daylight and calm waters along the Beagle Channel to enjoy its great landscape and rich wildlife, preparing ourselves for the navigation to come. Most important this evening was to have a first hint of the safety procedures that will be explained more extensively tomorrow, start familiarizing ourselves with the Europa and her particularities and being introduced to our duties on board during the trip. All necessary for us to have an overview over the kind of journey we have signed-on, and the system to follow during the next weeks. Soon we will start a memorable sailing journey that will bring us to the shores of remote areas along the Southern Ocean and South Atlantic. The passage ahead of us stretches between the southernmost tips of the American and African continents, braving the famous waters of the Drake Passage, Scotia Sea and South Atlantic. All was ready to sail the mythical “roaring forties”, “furious fifties” and “screaming sixties”, the high latitudes where we will spend the next weeks. Over those rough seas lay the Antarctic realms of ice and snow, the breathtaking South Georgia and the remotest inhabited place in the planet, the volcanic island of Tristan da Cunha.