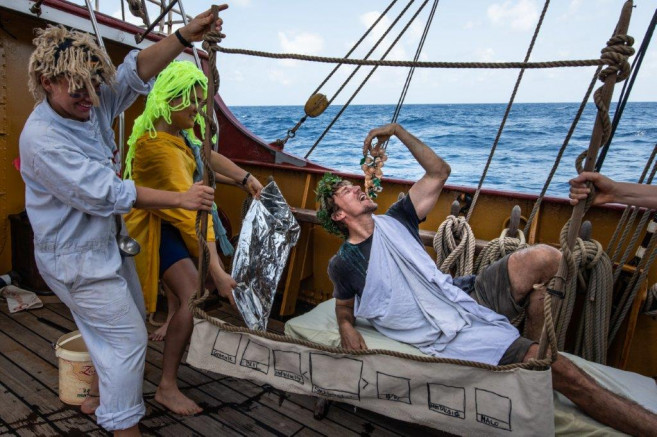 For days we tried to pass through the well-known sailors nightmare of the calms and squalls of the Doldrums. Though windless seas and good weather invited for continuing maintenance works while gently drifting seemingly aimlessly, an eye on the sky, the horizon and the radar screen now and then warns of the approaching showers, making for the works on deck to stop. However refreshing those short bursts of rain can be, there is always a question mark hovering over them about the amount of wind with which they are going to be loaded.

But lucky as we are, it has just been four seemingly endless days of manoeuvring yards and sails to try to catch little unstable puffs of wind in the light airs of the doldrums, that has brought us to catch the most welcomed fair NE-ly Trade Winds.

An increasing and stable wind-field came together with a warming of the air and drier meteorological conditions. Our troubled days due to lack of wind seem to be over, so far. Our own particular confinement in the doldrums has started to open up to the good winds of the tropical North Atlantic Ocean, at the same time that ashore, many countries are also relaxing their lock down policies and allowing regulated mobility of their inhabitants.

Together with the good sailing and progress on a NW-ly course, came the presence of countless drifting Sargassum rafts. The interface between Trade Winds and Doldrums seem to be a limiting factor on their distribution. Despite the large amount of it we can see all around since then, we are not sailing in the area of a major concentration of these free floating algae. Nevertheless there are numerous species of them, distributed throughout temperate and tropical waters. The widest free floating patches of Sargassum are known since a long time ago and there are many references to the so called Sargasso Sea in the literature, but that particular patch still lays far from us. Even so, some of it seems to escape the main concentrations and spreads over larger areas of the Atlantic.

Mar de Sargasso, refers to two fucus banks. The largest one laying between 19º and 34º of latitude, about a meridian 7 degrees west of the Azores. The smaller one situated between the Bermudan and Bahamian islands. Both groups of seaweed taken together with the transversal strip joining them, go under the name of Sargasso Sea, covering a surface area that is between six and seven times the area of Germany. Thus does the oceans vegetation offer the curious example of social plants of one particular variety.
Alexander van Humboldt. ´Views of Nature´

Those seaweed meadows show great persistency, probably already present and found in 1452 when captain Pedro Belasco, born in Spain, discovered the island of Flores sailing off the Azores. And sure afterwards Columbus crossed those great floating algae accumulations in 1492.
Amidst their fronds live a large amount of sea creatures, and they represent an important component of the tropical and subtropical marine ecosystems in the North Atlantic.

A host of small marine animals inhabits these tenthly-moved and evergreen masses of Focus Natans, one of the most generally distributed of the social plants at sea.
Alexander van Humboldt. ´Cosmos´

So we don’t have to show great surprise when today and in fact a few days delayed in his visit, the Great Neptune and his Royal Household rose from the seas amongst the seaweed rafts and boarded the Europa. A group of salty Shellbacks, who already sailed across the Equator before, sailing with four Pollywogs in these waters, could actually expect this ineluctable Royal visit.

Soon Neptune, feeling like at home, served himself a cup of coffee and found the best spot on deck to sit on his mooring-line throne, always accompanied by his wife Amphitrite or Salacia (depending if we follow Greek or Roman mythology), to preside the so called “Court of Neptune”, supervising the rituals and approving the Slimy Pollywogs into his unfathomable oceanic kingdom.

Soon the Crossing the Line ceremony began, considered an initiation rite that commemorates a sailor’s first crossing of the Equator and confirm the new shipmates capabilities of withstanding long times at sea and its related hardships. The origin of those rites seem to be lost in the mist of the old sailing times, but worshiping the God of the Sea once the equator is crossed in a sea-voyage is still a classical celebration for sailors around the world.

Once the tests and baptism to the sea kingdom was over, the four newly appointed Shellbacks already have full powers to play tricks upon others, next time they will ´Cross the Line´. From now on, all on board can call themselves´Sons (or daughters) of Neptune´