We spent the last night at anchor, in a relatively sheltered spot on the outer rim of Deception Island, dealing with 35 knots of wind, gusting up to 40. 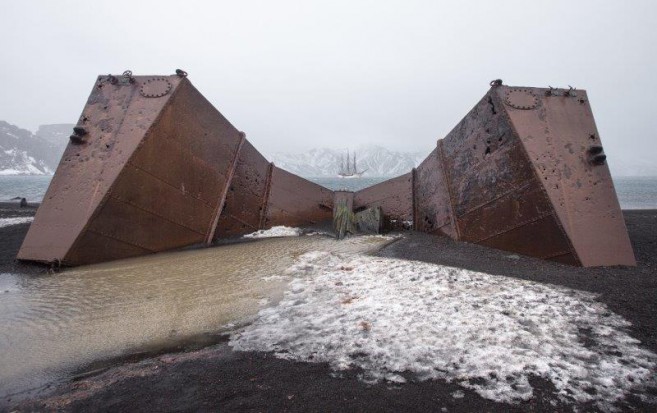 Early in the morning, before breakfast we heave anchor and start making our short way towards the narrow and only entrance to the volcanic caldera of Deception Island. Many of us were on deck by then under cloudy, cold, rainy and windy conditions, nevertheless enjoying the narrow entry called “Neptune’s Bellows”. With a steep lava and basaltic cliff on starboard side, and the notorious Raven rock on the other, it takes some nerve and skill to sail through.

Once inside Port Foster, the ample bay of the flooded Deception Caldera, soon we reach Whalers Bay, where we plan to land this morning. The long strenuous walk that we were planning to do to Baily Head had to be cancelled due to the really bad weather conditions. However, we were all ready for the visit to the historical remains of Hektor whaling station, that operated between 1912 and 1931. The Europa gets close to the beach, and despite the 35 knots of wind, gusting even more from time to time, the seas and the proximity of the coastline, allow us to get into the zodiacs and make our way ashore to land right in front of some of the many historical artifacts. As usual, there we are welcomed by a group of curious Fur seals as we gather next to the “U” shaped sort of floating pier used to repair propellers and shafts from the whaling vessels that used to operate in the area.

A clever system that could substitute the engineering problems, time, effort and money of building an actual port and dry docking facilities. From there we could all start walking around at our own pace, to enjoy the different beauty of this magnificent landing. Several melt-water streams from the glaciated area above, form channels cutting through the flat beach. The area gives us good walking chances through the whaling remains from the Neptune’s window to the airplane hangar of the base.

We had a bit more than two hours before getting back on board, in really harsh cold weather conditions under persistent rain and strong winds. Time enough to soak in the haunting beauty of the surroundings, exploring the remains of the Norwegian Hector Whaling station and the BAS (British Antarctic Survey) research station. These buildings, tanks, and boilers have been strewn and mess around by the lahar, or mud-ash flow, of 1969 when the terrain high up the hills behind the station heated up, melting the layers of ice and snow covered with volcanic ash, creating a devastating hot flow downhill that reached the sea level, passing through the Station on its way down.

Some of us took a short walk to the opposite side of the beach to an incredible lookout point called Neptune’s Window. So named by Lt. Penfold, from the British Royal Navy, following his survey of Deception Island in 1948-49, because weather and ice conditions in the approach to Neptune’s Bellows could conveniently be observed from this gap. Also it was from here that in 1820 a young sealer, Nathaniel Palmer, spotted hitherto unfamiliar land farther to the southwest, which would later turn out to be the Antarctic Peninsula. Unbeknownst to him at the time, the continent had been sighted months earlier by Thaddeus von Bellingshausen, a scientist and explorer sailing for the Russian Czar. We enjoyed that very same view with a similar sense of excitement, asPalmer would have nearly two centuries earlier. But on that occasion experiencing gusty strong winds that made us stay a few metres from the edge of the window, that actually ends up on a steep cliff over the Bransfield Strait.

On our way to the window and back we pass though a fairly well preserved whaling boats (water boats) that were mostly used to bring ice to make water for the high pressure boilers of the whaling station, besides help with the flensing and processing of the whales hunted and towed along the whaling ships operating in the area. Once finished the visit, and getting wet and cold, we call the zodiacs to get back on board our cosy, dry and warm ship. After this visit we are all filled up with the memories of the massive whaling that took place here, nowadays with all the abandoned remains decaying under the inhospitable Antarctic weather and half buried by devastating volcanic events. Encountered feelings between the eeriness, sadness and the beauty of what we have seen ashore, surrounded by great scenery and increased by the dramatic weather conditions of the day.

Once we are all on board, the wind gusts are over 45 knots and increasing. Is pretty clear that we will not be able to do more landfalls in Deception today, and we struggle to find shelter to have a quiet dinner before getting on our way through the Bransfield Strait, heading to the North of the Antarctic Peninsula and the Weddell Sea. Inside Port Foster the conditions are too bad to drop anchor, as the crew already experienced while trying it in Whalers Bay and be dragging continuously due to the bad anchor holding on this steep gravel sea bottom. So at the end we decide to head off the island passing by the Neptune’s Bellows once again, and trying to anchor right around the corner, on a relatively sheltered position from the N-ly winds. Once we found a spot we anchored and having a look at the weather situation and forecast, Captain, Mate and the guides decide that would be much better to wait on that spot until the strong winds on the Bransfield Strait die down a bit before attempting to cross it towards the Antarctic Sound.

At the beginning, the waiting time for this better situation seems to be until after dinner, while the anchor kept slowly but steadily dragging. But then when we are already unfurling sails and getting ready to go, the gusts became strong again and we got information from another ship (“Protector” British coastguard and fisheries patrol) that just crossed the Bransfield Straits telling us that out there it was blowing up to 60 kn of wind, even gusting more, and that we should not try to sail overnight. We heed their advise and spend the night under two anchors, with voyage crew helping the permanent crew doing the necessary anchor watches, until 4:00h in the morning, when we actually set sail and start our way.

Hi, The trip is sounding great but very rough! Following you with interest, say hi to my brother Rod Macfarlan!

Hi Bro, what a fabulous adventure! Very jealous. Send us an update about what life is like on board and a few photos when you can. Love from us all.

What an awesome adventure!!!! Thank you for updates.

Wish I were with you. What an amazing adventure! Love to Wej and Peg

Wish I were with you. What an amazing adventure!