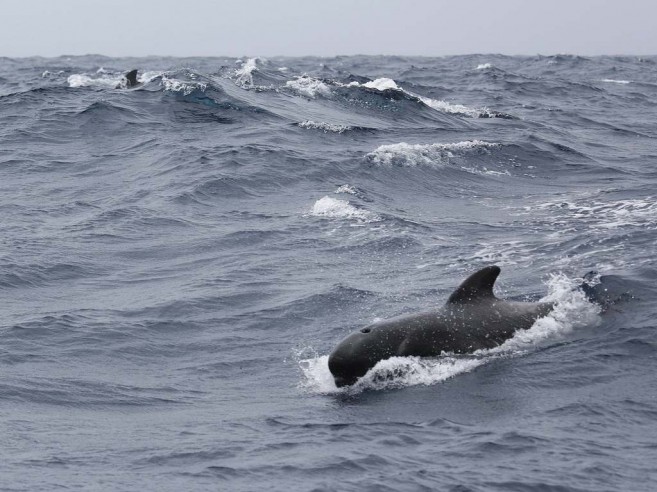 Today was absolutely awesome. Waking from a good 7 hour sleep to breakfast, first time in 5 days as I had been sleeping right through it when on the dog watch. We had watch from 8 am till 12 midday. It ws drizzling with rain so we had our wet weather gear on. I managed to keep my runners dry throughout most of the watch which I was pretty impressed with.

Then come 11 o'clock or so and the thick blanket of grey fog had crept right in, only a few hundred metres from the bow. Next the rain started steadily. Followed by a massive downpour moments later with rain coming in on deck horizontally being pushed by 35 knot winds. The rain was warm and my runners were now saturated within 30 seconds.

We striked the royal, t'gallant, course, jibs and staysails working together to find lines and listen to commands being given. Gosh it was fun. We were all thrilled with excitement smiling and wondering where we can head next to help haul. Julius and Bob were on the helm racing away at a steady 10.2 knots yelling "This is what sailing is all about". Mick running around with his go pro capturing all of this squally adventure. A small bird with legs the size of toothpicks took refuge from the downpour, landing on the shrouds to fluff his feathers and settle his heart rate.

White watch handed over to blue and we continued to scope the action from the fogged up windows of the deckhouse. We got comfortable after a warm shower and spicy peanut soup from Rensje's famous galley. As we were eating, the PA sounded from the dining room with captain Harko alarming us he spotted a pod of Pilot whales on Europa's starboard side. Up we shot cameras in hand to catch a great display of these beautiful creatures surfing the waves. There must have been a dozen or so of them. What a treat after our sail handling in the squall.

Post lunch a repeat of Master Commander was played for those who nodded off during last Fridays movie night. When I walked into the deckhouse I noticed the rain had stopped. It had turned into a glorious sunny day outside warm enough to be comfortable in a cardigan. What a day we were all thinking. What a contrast from only a few hours prior. Grey sky turned bright blue with only a slither of streaking cloud. How magnificent! Elliot entertained the voyage crew with celestial navigation and we attempted using the sextant. Thinking it couldn't get any better we saw more whales, this time the Sperm Whale species.

Scrumptious dinner and warm cinnamon rice pudding to follow. After a talk from Harko we learnt our maximum speed of the day during the squall was 11.5 knots! And having sailed 152 nautical miles in the last 24hrs in 22 degree Celsius temperatures. Perfect! Duty called as white watch headed to the helm and lookout. Just when I thought the day couldn't get any better it was topped off with helping the permanent crew do a night furl of both fore and main mast square sails.

The Kodak moment of looking back from the foremast t'gallant yard to a silhouette of Europa's mainmast in the full moon light; on a backdrop of stars and mirror like reflection of moonlight glistening across the evening ocean. What a treat! Thanks for turning on all your best qualities today Europa. It sure will be one to remember!