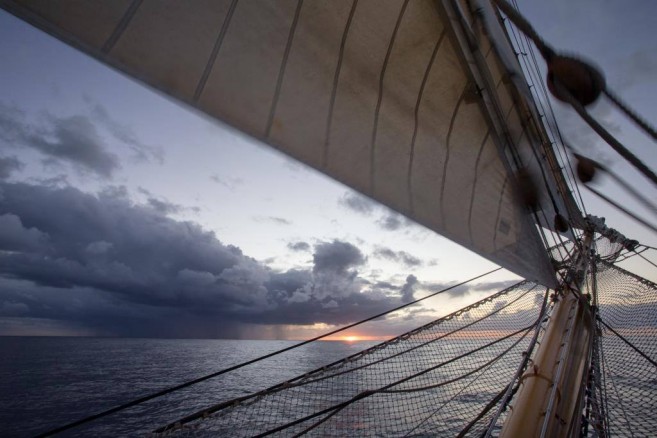 And getting ready for dealing with them. Sunny morning and 20 to 25 knots of SSE wind welcome the new day, while we sail close hauled on Starboard tack.

Our speed is about 6.5 to 7 knots on a WSW course. During the morning we set the Royals as the wind starts to decrease, but it becomes a bit gusty so we prefer to keep the Skysails furled, we still advancing at similar speed, helped by 2 knots of favourable current. A couple of squalls pass by, changing the wind pattern and bringing some rain. As we see them coming we get ready for them, taking sail away and we also change course for a few hours to the NE. After we get over those squalls it becomes windless, while we sail at between 2 to 4 knots.

Elliot takes the chance of the more quiet conditions to make his second talk on Celestial Navigation. And the crew have time for some maintenance projects, there is some work to do in the block for the Fore course tack, and Dan and Krista seize it using a Spanish windlass for tensioning it. After dinnertime we are still sailing quietly, in light winds, and we decide to set more canvas. All looks calm and quiet, but by the time the sun sets a big dark squall approaches in the horizon at our Port bow. Spectacular and beautiful scene, but it means starting preparations in case its course intersects ours.

Normally those squalls have strong winds and rain associated, and better be ready before it hits us. Soon we take care of it and Skysails are furled, Staysails come down and the Spanker in the Mizzen as well, and both Courses are clued up. We brace slightly to Port tack, leaving the braces coils on deck for quick response and for the same reason the halyards of the Royals are ballantined, ready to drop them fast. Now we just wait to see what this impressive dark squall is bringing us. After a couple of hours the wind is slowly coming back, and looks like we are free from this shower, so, carefully we start setting some canvas again. Dekzwabber and Middle Staysails are hoisted and we keep in standby. Finally the shower seems to be over and to gain some speed now that the wind increased a bit, we brace sharp again on Port tack, and set the Spanker. We are again on the move!

Afterwards during the night, the wind dies for a few hours, and we change tack bracing to Starboard tack.The bird life around the ship became a bit more scarce as the wind drops. Probably they moved looking for windier conditions somewhere else. But anyway we spotted our firsts Southern fulmars of the trip. A Minke whale was also seen by the lookouts and steering watch in the morning, and in the afternoon three huge Fin whales passed us on Starboard side.

And tell us about Wim - the stop, the medical attention, his prognosis, the change in plans and timing of this voyage, the whole feeling of all. As soon as I saw the complete change in course on the satellite view, I knew something medical had happened,- ust share a few details/comments. We who are watching care.