It’s time to cross the ocean again! After an exciting year, EUROPA will be finishing her Antarctica season in the Spring of 2023 in Cape Town. From there, EUROPA will set sail on a voyage up the Atlantic Ocean, finishing in Horta, the Azores. On our way, we hope to visit the remote Atlantic islands of St. Helena and Ascension. From there on, we will do something new and explore the Azores! Join us from Cape Town to Horta!

The journey will start with embarkation in Cape Town in the afternoon of the 13th of June 2023 and we will likely be setting sail already the next morning. These first days you will have time to get to know your fellow travelers a bit more, to see the color of the watch (red, white or blue) that you are assigned to and at what time your watch will start. During your watch you will stand on look out, steer the ship and help with sail handling. Together with your fellow watch mates you will help the permanent crew with sailing the ship on her course to the Netherlands. For many on board this will be their first time on an ocean crossing, others might have done similar voyages before. This mix of beginners and more experienced tall ship sailors creates a learning atmosphere on board, where each person can contribute in their own way to keep the ship sailing.

Spending weeks on board a ship, far away from civilization and internet connection, living and working with people you have never met before: most people cannot begin to imagine what it feels like to cross an ocean under sail. It is precisely this though, that makes an ocean crossing on board EUROPA a life-changing experience. On board, people from all over the world, of different ages and with different life stories, come together and work as one team to keep the ship sailing. As you get into the routine of life at sea, you will be surprised at how quickly you forget about social media.

Without any internet or connection on your phone, life on board is a way to be completely disconnected from our hectic lives at home. It gives you time to really connect with your fellow crewmates, yourself and the moment. Without Google, you’ll turn to each other and books for information. Let the people on board surprise you with their knowledge on very diverse subjects. Being completely disconnected you might find your true inner self, some real happiness or just some relaxing time.

Instead of one day on a plane, it will take us a month and a half to cross the ocean, giving your mind an opportunity to calm down, your body time to relax but most of all it gives you time to admire your surroundings, the beauty of nature and the importance to care for the environment. While you are on lookout, you will experience the all-encompassing nature. The endless mountains of water that appear and disappear around us, the feeling of being so vulnerable to the powers of nature, the indescribable beauty of sunrises and sunsets on the ocean, the millions of stars, animal life and all shades of blue make an ocean crossing an unforgettable experience.

After approximately two weeks at sea, suddenly a tall silhouette will appear on the horizon. The paradise-like island of Saint Helena is a tropical oasis in the middle of the Atlantic. Although we intend to visit the island on our voyage, we hope the COVID situation will allow us to do so.

Although tiny in size, St. Helena played an important role in world’s history. It has been of vital strategic importance to ships sailing to Europe from the Far East, attracting settlers, slaves and laborers from China, creating a racial melting pot on St. Helena. Another well-known role of the remote island was for being the site where Napoleon Bonaparte was exiled by the British government in 1815.

There is plenty to see on the island. Take a tour around the island and let yourself be amazed by the dramatic landscapes and the spectacular views over the ocean. Or stroll through the historical center of the island’s capital Jamestown.

After leaving Saint Helena you will spend around a week at sea before we reach the next stop on our journey, Ascension Island. Depending on the COVID situation, we hope to make a visit on the island. Right on time for the turtle hatching season! At night, you can quietly observe these gentle giants and their little ones, just as they hatch and take their first stumbling steps towards the sea. During the day you may want to take a tour around the island or go for a walk to Comfortless Cove, where you can enjoy a dip in the warm, turquoise water.

About 700 nautical miles from St. Helena, Ascension Island was discovered by the Portuguese navigator Joao da Nova Castella in 1501 and found again in 1503 by Alphonse Albuquerque on Ascension Day. The island remained uninhabited until Napoleon Bonaparte was incarcerated on St. Helena in 1815, when British marines were stationed on Ascension.

In 1823 the island remained under supervision by the Royal Marines and in 1922 it became a dependency of St. Helena. From 1922 until 2002 the island was managed by the Eastern Telegraph Company, the British Broadcasting Corporation (BBC) and various other entities. During the Second World War Ascension Island was used as an airstrip for British and American airplanes. Other important presences have been the U.S. NASA, U.S. Air Force, Royal Air Force (RAF) and the European Space Agency.

After seeing Ascension Island disappear in the distance, you will have a few weeks at sea to look forward to, during which you will cross the equator and welcome Neptune on board the ship. There is plenty of time to assist with sailhandling, helping with all kinds of maintenance activities and enjoying lectures on topics ranging from sail setting and striking, to meteorology, navigation and seamanship. During the night watches, the clear skies offer magnificent opportunities to stargaze

Another interesting sight to see at night is the algae lighting up on the bow of the ship. The effect is fantastic when we are accompanied by dolphins, who take some time to swim with us, while their tails light up under water. It is the fascinating phenomenon of bioluminescence.

When we reach the Azores, your transition into a tall ship sailor will be complete. After almost two months at sea, you can rightfully consider yourself a fully-fledged sailor and shellback and we hope you will have made both memories and friends for life.

Located on the island Faial, the sailors’ hub Horta offers picturesque cobblestoned streets and a spectacular view of Pico, the neighboring island which also happens to be the highest mountain of Portugal. Some will end their journey here in the Azores, while others might stay on board to explore the Azores with us. For those that end their voyage here, Faial is more than worthwhile to venture around for a few days, the perfect end to a voyage you will not soon forget.

On board Bark EUROPA we call our guests voyage crew. This means that Europa’s permanent crew will train you to be a sailor. No experience is needed, our crew will learn you everything along the way. Unlike going on a cruise, on Bark Europa you will be going on a hands-on, active sailing adventure. You will be divided into three watches, red, white and blue, named after the colors of the Dutch flag. You will be 'on watch' for four hours after which you have eight hours of free time.

During your four hours on watch there will be different tasks that will be divided between the members of your watch. There will always be two people on helm duty. The crew will explain how to steer the ship and what to look out for and together you will maintain a steady course on the helm. During the watch there will also be two people on look-out duty at all times. When you spot ships, buys, debris or wildlife then this will be communicated to the officer of the watch.

The rest of the watch members will be on deck duty. The permanent crew will give you sail training and you will assist in all sail handling. This involves setting- and taking away the sails by hauling- and easing lines, climbing the rigging to furl or unfurl the sails. The crew will instruct you how to work on deck and you will learn how to trim the sails to the direction of the wind. During deck duty, there is also time to assist the crew with maintenance tasks. This way you will learn how to work with traditional tools and methods, such as woodworking, sail making, celestial navigation and traditional rope- and rigging work.

During your eight hours 'off watch', there is plenty time to rest and enjoy the scenery. Whether you wish to do some quiet reading or write in your logbook in the library or prefer to enjoy an active role in the social life of the deckhouse: there is a place for everyone. In the deckhouse you will also find the ships bar where you can enjoy a glass of wine with your fellow crewmates, play a board or card game or just enjoy a good talk. The crew will be giving lectures on various subjects, from traditional sailor skills and knowledge to science and astronomy.

Of course, you can still assist the permanent crew and the voyage crew ‘on watch’ during your time off watch with sail handling and maintenance jobs. Sometimes the galley team asks for a hand with peeling potatoes or apples. Your off-watch time is for you to fill in, you may do as little or as much as you like.

Respect for the environment plays an important role in the philosophy of EUROPA and her crew. We hope to inspire our trainees to focus on everything that’s around them: not just a vast open ocean but a world on its own. We ask our voyage crew to listen to the sound of the ocean, the wind in our sails and the peace and tranquillity around us.

By conducting safe and environmentally responsible sailing voyages, we offer first-hand travel experiences to give our guests a better understanding of the ocean itself and the species that inhabit her. We hope that this way we inspire a group of ocean ambassadors all over the world.

For longer ocean crossings, Bark EUROPA welcomes scientists on board, carrying out their own research projects. We have been joined in the past years by oceanographers, astronomers and marine biologists. The presence and knowledge of scientists on board are always highly appreciated by both our crew and trainees.

We show them the wonders of the ocean by inviting our international voyage crew to participate in the ocean research conducted on board. The researchers involve the trainees in their oceanographic research by presentations, organizing special on-board exhibits, discussions and hands-on trawling work.

By working together with universities and other institutions we hope to connect the scientific world with our world at sea, to bring scientific knowledge to a wider audience and help to create more awareness for the state of the oceans and the polar regions. Together with researchers, universities and companies we have been able to collect solid data in recent years. Building a database requires a great deal of effort over several years and we are happy to make every effort as a platform for collecting this data. 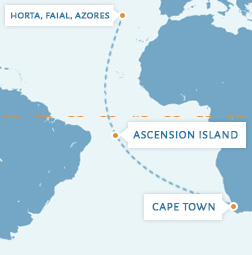