The Antarctica season 2020/2021 opens on October 29, 2019 at 12:00 CET (noon). From that moment the voyages will be available for bookings on our website. Bookings received before this date will not be processed to give everyone a fair chance.

Some people become interested in the North and South Pole after reading about the voyages of Willem Barentz and Shackleton. Others are more fascinated by the rich wildlife or the beauty of the unspoilt natural environment. Antarctica is one of the oldest continents on our planet, but man has always been unable to live here because of its extremely cold climate. It is the last great wilderness on Earth. A couple of thousand researchers spend the southern summer living in several research stations. During the southern winter, that number dwindles to less than 1,000. When winter grips this great, white desert, tourist activity is no longer possible.

The expedition starts in Argentina in Ushuaia, the southernmost city in South America, located alongside the Beagle Channel. From here, the ship must cross ‘the Drake Passage’, renowned by sailors the world over. Albatrosses and petrels will accompany the EUROPA on her way to the Antarctic paradise. After passing the Antarctic Convergence Zone, the ship sails between the icebergs to the South Shetland Islands. The wildlife is overwhelming: seals, sea-gulls, cormorants and petrels use the Antarctic summer to raise their young. In the Antarctic waters, the EUROPA will anchor in sheltered bays practically every day. The crew will take groups ashore in the dinghies to see glaciers, mosses and lichens, seals, birds and penguin rookeries. Ashore, visitors will often be welcomed by different kinds of penguins, such as the Gentoo, Chinstrap and Adelie penguins. Our experienced guide will give you information about the flora and fauna and will also tell you where to find bird and sea elephant colonies. The ship will sail further south. We expect the most loyal visitors of the Southern Ocean: enormous Humpback whales; Minke whales and even Orcas or Killer whales may well come close to us, curious to see who ventures into their waters. Ice masses will get bigger closer to the mainland. Steep glaciers, walls of ice with magical shapes and surreal colours will surround the EUROPA.

Our voyages are based on experiences from previous expeditions of the EUROPA to Antarctica. In putting together this year's itinerary we have included the most impressive places we have visited in the past. However it is important to realize that our day-to-day activities will depend on several circumstances. Your trip will be unique and one of a kind, and may not visit some of the landing sites or stations you may have heard about.

Expeditions in Antarctica is all about spontaneity, discovery, exploration and flexibility. Sometimes plan A can quickly turn into plan B or C. What is certain, is that our team of experienced guides and crew will always strive to create a remarkable trip for everyone: an expedition to the white continent of Antarctica that you will never forget. 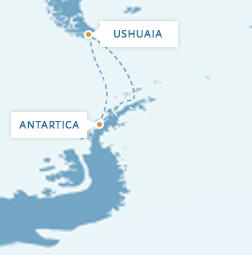