After a long time of dreaming, preparing and arranging, it's time for the start of our Pacific adventure. In about three months’ time we will cross the largest ocean on earth, extending from the Arctic in the north to the Southern Ocean in the south and covering nearly one-third of the earth’s surface and almost half of its water surface. Leaving South America behind us, we will head our bow westward to the endless waters of the largest and deepest ocean on earth: the Pacific. The more pronounced Pacific Easterly trade winds originating in the south east Pacific are perfect for sailing a square rigged vessel like Bark EUROPA and promise a comfortable sail onto the endless Pacific blue. Learn all about setting and taking away the sails, by hauling and easing lines. Climb in the rigging to furl or unfurl the sails. The crew will learn you how to trim the sails to the direction of the wind. They will ask you to help with the maintenance of the ship, by assisting in woodworking, sail making, rope work etc. Step on board and join us for this epic adventure!

Easter Island is world famous and for a good reason! This interesting and remote island is known for it's Moai Statues. The stone blocks, carved into head-and-torso figures, average 4 meters tall and weigh about 14 tons. These impressive and intriguing statues where carved and moved by the first settlers of the Island. The people who carved these giants somehow navigated a fleet of wooden outrigger canoes to this tiny speck in the vastness of the Pacific Ocean. Here, about 3,700 kilometers west of South America and 1,770 kilometers from the nearest neighboring island, the Rapa Nui carved and erected some 900 Moai across the island during the 10th till the 16th century reflecting the history of the dramatic rise and fall of the most isolated Polynesian culture.

The Polynesians arrived from the west rather than the east, and the people of Easter Island are believed to be descendants of intrepid voyagers who set out from Taiwan thousands of years ago. Legend says that the people left for Easter Island because their own island was slowly being swallowed by the sea.

Many of the Pacific Island where discovered by Polynesians because they used rigged canoes rather than the square rigged vessel that were used by the Europeans to wander the oceans. These canoes where not able to sail before the wind like the square riggers could. This meant that the canoes had to tack a lot making their tracks across the Pacific unique. Where the European vessels sailed in relative straight lines, missing most of the islands the Polynesians came across many of the islands in this vast ocean.

Next to the mysterious Moari statues this paradise Island also has some truly pristine beaches. Who doesn't love swimming in lapis lazuli colored water or walking along beaches of soft white sand? Easter Island has many breathtakingly beautiful beaches. Anakena beach is a perfect example of paradise. This wonderful beach surrounded by impressive coconut tree forest is something extra special. It is the place where Hotu Matua disembarked. Some people say that one of the many caves along the beach was this king’s home.

After a sail of more than 2300 nautical miles and having visited islands like Pitcairn and Mangareva you will arrive at Tahiti. These islands form a group of 118 islands. The biggest Island is simply called Tahiti and is home to the capital city of Papeete. Papeete, meaning “water basket,” was once a gathering place where Tahitians came to fill their calabashes with fresh water. Now, Papeete, is where most of the island’s population resides near the shore, leaving the interior of the island feeling almost untouched and ancient with its majestic peaks, mystical valleys, crystal clear streams, thundering waterfalls and endless rain forest. You can find black sand beaches on the East coast, white sand beaches on the West coast but either black or white, these beaches are breathtakingly striking with the palm trees and the azure colored seas rolling gently onto them. Beneath this pallets of blue and green water, tropical-colored fish of many different shapes and sizes can be seen in the coral gardens that thrive in the warm temperatures, these coral reefs are home to some 800 different fish species. You may spot a giant manta ray glide past, enjoy the curious play of the many dolphins and ancients sea turtles can be seen in these waters. Every year, from August to October, Polynesian waters also welcome many humpback whales coming to mate and give birth in the deep and safe bays before returning to the South pole. You might be able to see these whales by themselves or with their young offspring around Tahiti by the time Bark EUROPA drops her anchor.

The interior of the Island is a heaven for birds, with so many fruit trees, flowers, over a thousand different plant species and many streams and rivers, lots of migrating birds take rest on the Islands. Many of them will nest and raise their young in the safe and sheltered uninhabited islets of the islands. Among others you can see Blue- footed boobies, frigates, salanganes, hunting martins, pacific swallow, Tahiti kingfisher and small herons. While walking under a cover of many banana, coconut and breadfruit trees, you may find yourself surrounded by butterflies and bumble bees, some gecko's in different colors can be spotted in between the tropical tiare flower bushes, the proud emblem of Tahiti. The first Tahitians arrived from Western Polynesia sometime around 1000 CE, after a long migration from South East Asia or Indonesia, via the Fijian, Samoan and Tongan Archipelagos.

A lot of history is alive today and many stories can be told about these incredible people. The stories can be illustrated with traditional dance, craft, war and navigation manuscripts and traditional fishing customs and dishes. There were many different tribes on the islands over the years and many exchanged trade and customs in peace and war times. From the 17th century onwards the islands were sighted and visited by European explorers. Portuguese navigator Pedro Fernandes de Queirós, serving the Spanish Crown in an expedition to Terra Australis, was perhaps the first European to set eyes on the island of Tahiti. He sighted an inhabited island on 10 February 1606.The first European to have visited Tahiti according to existing records was Captain Samuel Wallis, who was circumnavigating the globe in HMS Dolphin, sighting the island on 18 June 1767, and eventually harbouring in Matavai Bay. On 2 April 1768, it was the turn of Louis-Antoine de Bougainville, aboard Boudeuse and Etoile on the first French circumnavigation. In July 1768, Captain James Cook was commissioned by the Royal Society and on orders from the Lords Commissioners of the Admiralty to observe the transit of Venus across the sun, a phenomenon that would be visible from Tahiti on 3 June 1769. He arrived in Tahiti's Matavai Bay, commanding HMS Endeavour on 12 April 1769. There are many stories to be told about these European visitors, you can visit museums, historic sites and read about the fascinating maritime history of these islands.

Sailing further, Fiji will be another stop on our route, best known of all stops so far. With its myriad greens in the landscapes, the yellows of the palm trees, the orange colors of the ripe mangos and papayas and blue and greens of the sea, Fiji is a colorful destination. Below the surface an even colorful pallet presents itself, with thriving corals and tropical fish all around.

Fiji is an archipelago of more than 300 islands and more than 500 islets, stretching the Fijians territory about 18.300 square kilometers. The two major islands are Viti Levu and Vanua Levu, accounting for more than 80% of the population.

The first settlers of Fiji are known to be the Austronesian people who reached Fiji about 3500 to 1000 BC, followed by the Melanesian people around 1000 BC. It is believed that with the great Lapita migration into the Pacific, the Polynesians settled in Fiji as well, which is clearly shown from archeological evidence, showing a strong connection to the Polynesian culture.

Fiji’s history is one of mobility, and while exploring the region with large elegant watercrafts with rigged sails, a unique Fijian culture developed. The watercraft was called a drua, which was originally from Micronesia, spreading to Fiji and from there to Tonga and Samoa.

The first known contact with Europeans is dated in 1643, when Abel Tasman explored Vanua Levu and Taveuni. British explorers followed in the late 18th century. After a period as an independent kingdom, the British established the colony of Fiji in 1874, which went on until 1970, when Fiji gained its independence again as the Dominion of Fiji.

Fiji, the islands of pristine turquoise waters, white sandy beaches and jungle rivers has a very tight-knit society, mostly village based, but at the same time Fijians are very friendly and welcoming to visitors.

On the tropical islands of Fiji more than 800 unique plant species and animals can be found, such as the orange fruit dove, the Fiji petrel or the Gau Iguana, a native lizard.

Your off watch time is for you to fill in, you may do as little or as much as you would like. These hours are also for you to catch up on your sleep. When you are setting sails, reading or working away on deck, in the galley they are always busy preparing meals to keep everyone well fed. Meals will be served three times a day with coffee and tea times in between. In the evenings the crew prepares team challenges and pub quizzes to enjoy together with your watch mates. 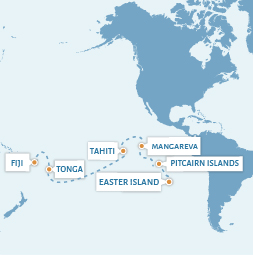