Combine the two best sailing voyages in the Southern Atlantic and start your adventure on EUROPA with a one week expedition on the Falklands. Surrounded by the many seabirds and magnificent albatrosses we will explore the area. We will make daily landings and our guides will take you on a tour telling you all they know about the breathtaking sceneries and its spectacular wildlife. After one week, we will continue the voyage with a strong sail from Stanley to South Georgia and the Antarctic peninsula. During this leg EUROPA can usually take advantage of the prevailing strong (and sometimes stormy) westerly winds, making a good crossing to South Georgia. You will be able to experience all the aspects of seaman’s life, including watch keeping, climbing the masts and classic navigation. In sailing the EUROPA, teamwork is the keyword. On board you learn the names of the hundreds of different lines and 30 sails, you will be steering the ship, standing on lookout and hoisting the sails.

Situated between the latitudes of 51° and 53° south and 57° and 62° west in the South Atlantic Ocean, the Falkland Islands are something truly special. Imagine miles and miles of unspoiled breathtaking landscapes, where the main occupants of the land are thousands of birds. The steep cliffs of the island are home to the black browed albatross and the rockhopper penguin colonies.

This voyage will bring you around the island and will be fully focused on admiring the beauty of the area and spotting its incredible wildlife. Spot Gentoo penguins, Magellanic penguins and a lone King penguin with their chicks in their natural habitat, standing guard over their burrows. Spot the everpresent seabirds like the Kelp Geese, White Tufted Grebes, oystercatchers, petrels, and of course, the magnificent albatross.

When we reach South Georgia we will anchor here for a week in different bays surrounded by mountains, glaciers, beaches and steep cliffs, inhabited by albatrosses and thousands of penguins, including the King Penguin. The helm grass on the coast of South Georgia provides ideal shelter for Fur Seals and Elephant Seals. We’ll find the remains of a former whaling station at Grytviken and see the grave of Shackleton, one of the most heroic pole travellers. It is an old tradition to drink a glass of whisky near his grave.

Between South Georgia and our next destination, Antarctica, we have to cover about 1000 NM. We have scheduled approx. ten days to get there. On the Southern Ocean the winds blow continuously and these seas have the reputation of being stormy; seamen speak about the Roaring Forties and the Furious Fifties. The first land comes into view after about 600 nautical miles, the South Orkneys. After a visit to, among other things, an Argentinian research station, we hoist the sails again on our way to the Antarctic Peninsula.

Our voyages are based on experiences from previous expeditions of the EUROPA to Antarctica. In putting together this year's itinerary we have included the most impressive places we have visited in the past.

Once we arrive on the Antarctic Peninsula, we will spend about 5 days in sheltered bays and make about 2 landings per day. Beautiful hikes will bring us to the most extraordinary places and most likely we will visit a research station. An expedition in Antarctica is all about spontaneity, discovery, exploration and flexibility. Sometimes plan A can quickly turn into plan B or C. What is certain, is that our team of experienced guides and crew will always strive to create a remarkable trip for everyone: an expedition to the white continent of Antarctica that you will never forget. 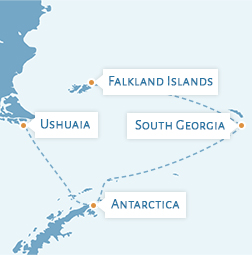