Step on board and take the helm to steer us from Fiji to Brisbane. In about 22 days, we will set sail from the southern areas of the Pacific to Australian waters. With stunning sea life and the beautiful colors of the Pacific ocean and nearby reefs, this voyage will be a perfect trip for those who are looking for a 3 week ocean passage in a turquoise, warm and gentle environment.

NB. Please be advised that for those that combine these two voyages it unfortunately is not possible to stay on board in New Caledonia during the stopover. We kindly ask you to arrange an overnight stay on the island yourself for the 14th and 15th of July 2020 on New Caledonia. Guests that only booked one voyage, there is no possibility to stay longer on board.

Fiji, with its myriad greens in the landscapes, the yellows of the palm trees, the orange colors of the ripe mangos and papayas and blue and greens of the sea, Fiji is a colorful destination. Below the surface an even colorful pallet presents itself, with thriving corals and tropical fish all around.

Fiji is an archipelago of more than 300 islands and more than 500 islets, stretching the Fijians territory about 18.300 square kilometers. The two major islands are Viti Levu and Vanua Levu, accounting for more than 80% of the population.

The first settlers of Fiji are known to be the Austronesian people who reached Fiji about 3500 to 1000 BC, followed by the Melanesian people around 1000 BC. It is believed that with the great Lapita migration into the Pacific, the Polynesians settled in Fiji as well, which is clearly shown from archeological evidence, showing a strong connection to the Polynesian culture.

Fiji’s history is one of mobility, and while exploring the region with large elegant watercrafts with rigged sails, a unique Fijian culture developed. The watercraft was called a drua, which was originally from Micronesia, spreading to Fiji and from there to Tonga and Samoa.

The first known contact with Europeans is dated in 1643, when Abel Tasman explored Vanua Levu and Taveuni. British explorers followed in the late 18th century. After a period as an independent kingdom, the British established the colony of Fiji in 1874, which went on until 1970, when Fiji gained its independence again as the Dominion of Fiji.

Fiji, the islands of pristine turquoise waters, white sandy beaches and jungle rivers has a very tight-knit society, mostly village based, but at the same time Fijians are very friendly and welcoming to visitors.

On the tropical islands of Fiji more than 800 unique plant species and animals can be found, such as the orange fruit dove, the Fiji petrel or the Gau Iguana, a native lizard.

After Fiji, we head Europa’s bow to the South West, to Australia, but not before we pay a visit to the exotic island of New Caledonia. From the western red-soiled wilderness to the blue lagoons and green lush mountains of the east, New Caledonia has loads to offer!

Located between the east coast of Australia and Fiji, the first settlers of New Caledonia are believed to be the Melanesians from Southeast Asia around 3000BCE. The first European to visit the island was Captain James Cook, who gave it the Roman name for Scotland, Caledonia. In 1853 the island was annexed by France, and served as a penal colony until 1897. With the formation of the French overseas territory in 1946, the island became part of it.

Because of this French annexation and overseas territory, the island became a mix of French and Melanesian influences, a melting pot of different ethnic influences including Asian communities and people from other islands.

This mixed culture is still all around, for example in Nouméa, the seaside capital of New Caledonia, where European style architecture and glamorous marinas feel like you’re on the French Riviera. While at the same time, outside the capital, the mountains, rainforests and grasslands feel like the local Pacific culture again.

About 60% of New Caledonia’s lagoon is listed as UNESCO World Heritage Site and the marine environment is one of the most beautiful in the world. Hundreds of underwater wildlife species and breathtaking corals are preserved in the reefs of Caledonia.

Your adventure on board Bark EUROPA will end in Brisbane, the river city. This beautiful, warm and sunny city on Australia's east coast lies snuggly between the gold coast and the sunshine coast. It sounds as good as it is: sunshine, sea and a lovely city to explore. Brisbane is called the river city because of her beautiful Brisbane river that curls through the city centre. The city can be explored from the water in the many different kinds of boats that sail around or by foot, bus or bike.

Have a look at the South Bank Grand Arbour with her impressive 443 curling steel collumns covered in flowers. When you are at the South bank area a visit to the Nepal Peace Pagoda is well worth it, with its traditional architecture, art works and meditation area. The Parklands area is home to many cafés and restaurants and a nice place to sit down and enjoy the busy city life. Have a stroll over one of the many markets in town that offer many different stalls, from fruit and vegetables to garments and accessories from some of Brisbane's most talented young designers. Another great thing to do while in Brisbane is to visit the City Botanic Gardens, its Brisbane's most mature gardens with many rare and unusual botanic species. In particular a special collection of cycads, palms, figs and bamboo. It also shows the Sir Thomas Brisbane Planetarium and the "Tsuki-yama-chisen" Japanese Garden.

If you have a bit more time to explore Brisbane and her surroundings a good outing is to go to Brisbane's Forest Park. The large nature reserve lies on the western boudary of the city into the Moreton Bay Region. It lies between Mount Coot-tha Reserve and the hogher peaks to the north. The park supports many plants and animals and it essential to their survival. In 2015, a competition by travel guidebook Rough Guides saw Brisbane elected as one of the top ten most beautiful cities in the world, citing reasons such as "its winning combination of high-rise modern architecture, lush green spaces and the enormous Brisbane River that snakes its way through the centre before emptying itself into the azure Moreton Bay." 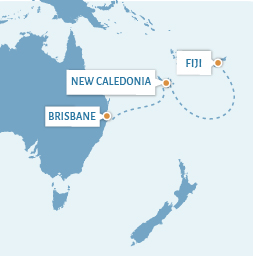